A powerful side of YouTube is the one that contributed to the death of MTV by providing free-of-charge availability and promotion of music videos. Recently, YouTube created a music section and is expected to launch a streaming service to compete with brands like Spotify, among others.

One of the most popular music videos at the moment is Taylor Swift’s Bad Blood, which premiered online. Weeks of promotion and audience anticipation led up to its release stemming from the many celebrities that were to make an appearance in the video, including Cara Delevingne, Lena Dunham, and Selena Gomez.

On June sixth, Björk’s YouTube channel released a special music video for the hit song Stonemilker. It is a 360-degree virtual reality experience that allows the viewer to “move around” the singer and the location in Iceland, a feature that has been available on YouTube since March. It was created for Björk by award-winning director Andrew Huang.

YouTube is a platform where music videos remain forever, or for as long as YouTube continues to host them. If you ever want to remember what Rihanna looked like when she was a new celebrity, all you have to do is type her name into the YouTube search. Here’s Rihanna circa 2010.

Lip Sync Battle has been on the cable network Spike for a while. Produced by John Krasinski and hosted by LL Cool J, the show has truly taken off on YouTube. In this episode, John Krasinski himself participated, battling his inner Tina Turner against Anna Kendrick’s combination of JLo and Pitbul.

Honorable mention: stepping away from pop, I’d like to include here an older performance by B.B King, whom we recently lost due to his 20-year battle with diabetes. Farewell to this inspirational blues magician. 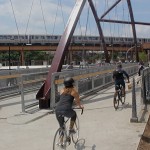