Last year, likely expecting property values in the neighborhood to rise due at least in part to the 606, the middle-aged sisters who had owned our building sold it to a landlord who didn’t renew any of its tenants’ leases so that he could renovate the apartments.

Video First Week of The 606 by Paula Calvo, Music by Daniel Crespo.

When the 606, a new park that includes the 2.7-mile Bloomingdale Trail, opened a few weeks ago in Chicago, my partner and I attended the celebration in spite of hangovers from food poisoning. So enthusiastic were we about the trail. The 606 project’s story is already old, with the ten years leading from the first meetings about how to repurpose an abandoned elevated rail line to the collaboration between the City of Chicago, the Chicago Park District, and the Trust for Public Land, among others, that led to the opening of the park and trail in June.

The party to commemorate the event was, in its format, a typical Chicago street festival. Booths lined a section of Humboldt Boulevard where one of the entrances to the park is, among them food vendors and nonprofits whose missions align with that of the 606. Two stages at each end of the block featured musicians running the gamut from roots rock to hip-hop, perhaps unintentionally acknowledging the, at least for the moment, diverse neighborhoods through which the 606 runs.

My partner and I took our two-year-old to participate in the excellent programming for children that was part of the festival, including parades with homemade costumes and flags and LED lights at dusk. But it was bittersweet as we thought of the apartment we have rented for years on Humboldt boulevard a few blocks from the trail and of how we were about to be forced out of it. Last year, likely expecting property values in the neighborhood to rise due at least in part to the 606, the middle-aged sisters who had owned our building sold it to a landlord who didn’t renew any of its tenants’ leases so that he could renovate the apartments and is now asking, he told us, around $500 more in monthly rent for them.

A few months ago, a building two doors down from ours was also sold and its tenants’ leases were also not renewed. Many low-income tenants and tenants who were disabled lived in the building benefitting from housing subsidies and from the community they had created with each other. Demonstrations for fair housing practices have since taken place outside the building, and after each one my partner and I watch their homemade signs picked up the next day from the yard and tossed into a dumpster with as much ceremony as any of the debris from demolitions inside the building. My partner and I will move farther West to the neighborhood of Hermosa, along with many Humboldt Park residents.

The two of us like some economic development, whether a result of wealthier people moving into a neighborhood or not. Living in a big city is about having choices, about being able to walk to a grocery store or a café. And yet it seems our choices become less as we are given so few of them in where we can live. Our neighbor downstairs who must also move out along with her six-year-old daughter who has spent her entire life living in our building, tells us that in 20 years, she has never seen things change so much so quickly in Chicago. And it’s not just in the neighborhoods around the 606, she says. Prices are going up everywhere. An artist friend who has lived in Chicago for more than a decade says Chicago has always been the city that had bigger markets for things like art but was still easy to live. I think of the egoism and competition embodied by New York City stereotypes, but he’s talking about money.

Days after the festival, I take my bike up the Humboldt Boulevard ramp on the trail and ride its length, checking out a few of the parks connected to it that are part of the 606 project. It’s narrower than I expected, and at 9 a.m. on a Sunday, already congested. Knowing of the park’s features along the trail to use vegetation to visualize the microclimates that extend west of Lake Michigan, I look for evidence of them, but these things take time to develop. The trail is clearly not finished. A group of city workers block traffic on the trail for a moment near Milwaukee Avenue to run a bundle of electric wires somewhere.

What I find myself wanting more than anything is more space to travel rather than more green space by which to be surrounded. In certain places it looks as if the trail could be several feet wider if only there were fewer bushes or patches of grass along it. With narrow rubber strips on each side of the path, presumably for walking, and a paved middle section presumably for cycling, the Bloomingdale Trail accommodates all. But the full length of the trail and its access points lack any signage indicating how it is to be used. Users unable to intuit that the soft parts might be intended for pedestrian traffic, for instance, or unwilling to heed their intuition, make for an often stressful experience of the trail. I see this dismay on the faces of many of my fellow visitors, much I believe, to the surprise of all of us.

Still, we acknowledge that the park and the trail are not yet complete. Even with graceful lamps overhead (my favorite part of the trail’s design) and flourishes like the spiral ramp at the trail’s west end, it is difficult not to see the 606 as a missed opportunity for more innovative architectural and design elements to have been featured. I message a friend to tell her all of this as I lounge on a bench along the trail overlooking Humboldt Boulevard, and as I exit the trail to go back to my apartment and search craigslist for rental properties in other neighborhoods, my friend replies, “These things happen.” 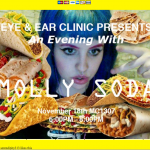