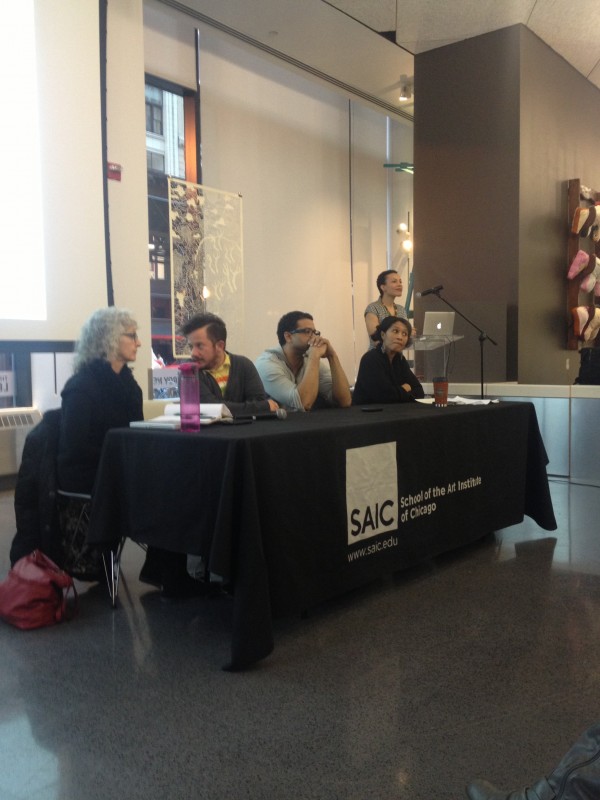 (From left) DeGenevieve, Rodriguez, Majeed, and Crawford joined Brown for the “Controversy, Community and Curriculum” panel

SAIC has been having a series of institution-wide conversations about diversity since 2009, when the school released a new Strategic Plan with diversity as one of its seven initiatives. Recently the Diversity Action Group (DAG), composed of SAIC students, faculty and staff held two rigorous, several-hour long symposia to discuss the issue that has been deemed a priority at SAIC. The DAG then presented the most pressing issues concerning diversity — delineated by students participating in these symposia — to President Massey’s cabinet. You may or may not have seen one of the school-wide emails sent by the Office of the Provost that discusses this topic — the information is all there.

That’s why it should come as no surprise that the panel discussion “Controversy, Community and Curriculum,” held on Wednesday, April 10 on the first floor of the Neiman Center, was a well attended event. Spearheaded by Rashayla Brown, co-chair of student group Black at SAIC, the panel brought together four faculty members to discuss “the unique role of the artist in addressing power dynamics, how controversy can affect an artistic community, and why critical consciousness of diversity and inclusion should become part of the curriculum.” Romi Crawford (VCS), Barbara DeGenevieve (Photography), Oli Rodriguez (Photography) and Faheem Majeed (Sculpture) all joined Brown to address questions that mostly focused on how to discuss art work that addresses race, class, gender and sexuality.

The panel, sponsored by Office of Multicultural Affairs and the Dean’s Office, began with each faculty member introducing their practices, their interests, and how they deal with the these issues that tend to affect communities of difference. Crawford said she is constantly engaged in looking at race and ethnicity in aesthetic work and tracking the dialogue that exists about these topics in literature and film, for example. Majeed is currently teaching an “Introduction to Social Practice” coures at the University of Illinois at Chicago and is a former executive director of the South Side Community Arts Center. Rodriguez has explored queer identities in his work, and curated the recent “The Great Refusal” show at Sullivan Galleries on queer aesthetics. He is currently co-teaching a course with Catherine Opie, the William and Stephanie Sick Distinguished Professor at SAIC, on sex and S&M. DeGenevieve, who has been at SAIC since 1994, has very candidly explored issues such as pedophilia, pornography, and nudity through photography.

A set of three questions, collected from students by Black at SAIC members, guided the panelists. The topic of controversy and student work was present throughout the whole conversation. There was a repeated mention of the controversial as a genre, and an agreement that controversy is at its most productive when there is a possibility for a larger conversation about what a controversial work is addressing, not just about how problematic the work is. DeGenevieve mentioned that it was necessary to give students the benefit of the doubt, and letting them explain what is going on in their work first.

It is important, they all agreed, that students realize they are not the only ones trying to address these issues — of sexuality, of class, of gender, of race — critically at SAIC; they must unite and mobilize. Learn to speak about your work aggressively, with swagger, Crawford suggested, and don’t be afraid to confront faculty members. It’s a recurring problem, a student pointed out, that many instructors are not always willing, or prepared, to address issues that concern communities of difference. The panelists, and many audience members, agreed that it is imperative that the school implement faculty-wide training on how to appropriately discuss these issues with students.

Controversy and student work has been a prevalent topic of conversation and FNewsmagazine was recently a forum for this discussion. Black at SAIC, the organizers of the panel, responded to the work of SAIC BFA student Jason Guo in the recent “New Work” show at Sullivan Galleries in a recent Letter to the Editor. “We question what we are being taught at SAIC, if a student can run amuck with the school’s media, school-sponsored galleries, and faculty approval despite making awkward, stereotypical, and underdeveloped work,” they wrote. “An administration that addresses inclusion and diversity but promotes undefended work that exploits a painful history runs the risk of being hypocritical and ineffective.”

The content of Guo’s work was brought up at the panel discussion and Brown steered it away from specifically talking about the work of one student, but about talking about the larger issues at hand. In light of the conversation, a student then expressed that these discussions must include students, like Guo, that do not tend to agree, or are just not aware, of the issues that are discussed at events like the panel, and how their work affects others. If students want to make controversial work they should be able to, the student pointed out, but they must be able to discuss it and express clearly what it is that they are trying to address. 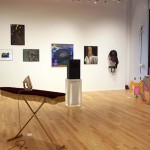 One Response to Controversy, Community and Curriculum at SAIC