A documentary joins the fight against gentrification.

A documentary joins the fight against gentrification

Initially, viewers might be tempted to dismiss “Battle for Brooklyn” – a documentary directed by Michael Galinsky and Suki Hawley that tracks the rise and fall of the Atlantic Yards development in Brooklyn – as propaganda, albeit well-intentioned propaganda. The film doesn’t hesitate to make its loyalties known; it tells its eight-year-long story almost exclusively from the point of view of Develop Don’t Destroy, a coalition of anti-gentrification residents devoted to halting the project. 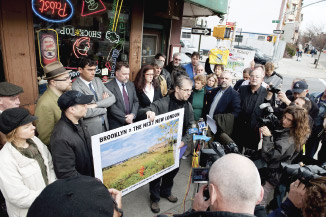 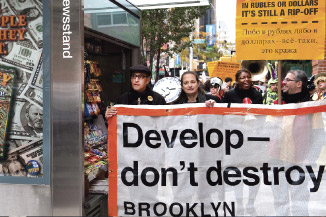 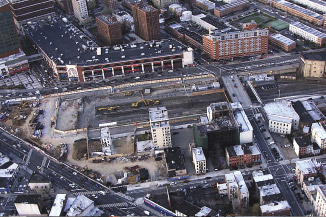 In 2003, developer Forest City Ratner announced plans, approved by Brooklyn Borough President Marty Markowitz, to build a 22-acre basketball arena and high-rise real estate development in Prospect Heights, near downtown Brooklyn. A community already existed within the project’s footprint, but the developers assured homeowners and businesses that they would receive a fair price for their property.

However, many residents were appalled by Markowitz and Ratner’s plan, which involved having large swaths of Prospect Heights deemed officially blighted. This would allow the government of New York to seize their property under eminent domain, a law which allows the state to appropriate private property for public use. Though the case for Prospect Heights as a “blighted” neighborhood was dubious – from what we see of it in the film, it’s an average middle-class neighborhood – Markowitz and Ratner pressed forward with the project.

Unwilling to abandon their community, residents formed a resistance group, Develop Don’t Destroy. At the heart of this struggle stands activist Daniel Goldstein, who refuses to sell his apartment even after everyone else in his building strikes a deal with developers. This move costs him his fiancée, but it also makes him a hero in the community – a hero among those who are sympathetic to Develop Don’t Destroy, that is. To BUILD (Brooklyn United for Innovative Local Development), a coalition of citizens who are sympathetic to the project, he’s an interloper whose resistance is robbing them of the jobs the arena promises.

This struggle between activists is one of the most interesting aspects of “Battle for Brooklyn.” According to the largely-black membership of BUILD, the middle-class citizens who compromise Develop Don’t Destroy are, in their own way, gentrifiers and will not need the jobs that the development will provide. The members of BUILD, on the other hand, largely come from high-crime communities that haven’t seen any form of economic development in years. The prospect of jobs within their community is too tempting an offer to pass up, even if these jobs will render their neighbors homeless. As one member of BUILD points out early in the movie, no one from Develop Don’t Destroy took any interest in their black neighbors until they needed something from them.

In moments like these, the documentary raises interesting questions about what a neighborhood is. Develop Don’t Destroy claims to represent the essence of Prospect Heights and Brooklyn, much more so than the Atlantic Yards development, which they portray as erasing any sense of community or authenticity. But according to BUILD, Daniel Goldstein and his compatriots have no claim to Brooklyn. It’s the members of BUILD that have been residing there for decades upon decades, and it’s high time that the city bothered to do something for them.

This conflict alone would make for an interesting documentary. But the full story behind “Battle for Brooklyn” is much more baroque and sinister, thanks to the influence of Forest City Ratner. Halfway through the film, Develop Don’t Destroy finds evidence that BUILD has been taking money from developers. Forest City Ratner also achieves a suspicious victory during an MTA auction, winning the rights to an abandoned stretch of train tracks despite putting in the lowest bid. There seems to be no end to the miracles that the developers achieve. Even as the economy begins to sag and their ability to complete the project comes more and more into question, the developers leap every hurdle that Develop Don’t Destroy puts in their path, with the help of Markowitz and the government of Brooklyn.

Eight years after its inception, Atlantic Yards has delivered none of the boons it was supposed to bring to the community. The size of the proposed project shrank drastically after the financial crisis of 2008; nevertheless, it broke ground in 2010. Initially, it only offered 114 construction jobs, 14 of which went to local residents. But recently, Rather has voiced an interest in constructing the remaining high-rise entirely out of pre-fabricated modules, eliminating many of the jobs that won him BUILD’s support to begin with.

Many of the critiques that Develop Don’t Destroy made about Atlantic Yards proved true, making “Battle for Brooklyn” a relevant testament to the role that money and clout play in civic life. The documentary is unabashedly biased; Goldstein is the only activist with a palpable interior life, meaning that the viewer cannot help but sympathize with him. That said, Goldstein has an interesting story. He sacrifices his fiancée to his fervor for the cause, but soon finds another life partner in Shabnam Merchant, a fellow member of Develop Don’t Destroy. Their courtship and marriage coincides with the denouement of the battle, making Goldstein and Merchant natural choices for the film’s protagonists. Their relationship also provides a handy visualization of the decade this battle consumes; they meet, date, wed, sire a child, and turn grey before the struggle with Forest City Ratner comes to its bleak conclusion.

This partiality might lead some critics to disregard the documentary’s record of events, but it’s easy to see why Galinsky and Hawley made this choice. Atlantic Yards and its developers do not need the directors to vindicate them – after all, they won – and Galinsky and Hawley don’t seem interested in objectivity. Rather, they wish to investigate the circumstances that made Forest City Ratner’s victory possible. During their struggle, Merchant and Goldstein learn all the ins and outs of the legal system, and all the ways in which Atlantic Yards has no right to exist; they also learn that the legal system doesn’t have much interest in penniless activists.

Large swaths of “Battle for Brooklyn” read as the lurid nightmare of an Occupier. The viewer might want to believe that it’s biased, simply in order to avoid confronting such an ugly reality. But the film’s last image – Merchant and Goldstein having a gate shut in their faces as they watch the construction – is hard to argue with. 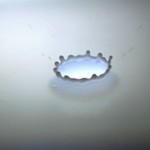 Cry and He’ll Go Away 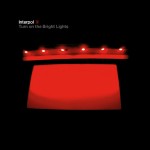 Interpol – Turn on the Bright Lights