School officials say the new Student Center will be unveiled in April 2012.

“In some ways, we can’t really anticipate the exact impact of what the Student Center will do for students. The campus has not ever had a heartbeat, because we are so spread out and so vertical that most conversations happen on elevators,” said Dublon when asked to predict the effect this space will have on students’ everyday lives. 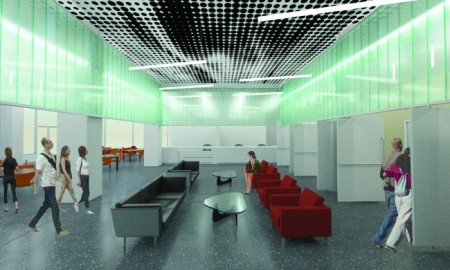 Late or not, the SAIC Student Center is finally becoming a reality, and the construction process has already started. The 10 million dollar project will be located in the first and second floors of the Sharp Building, covering a total of 20,000 square meters. Valerio Dewalt Train Associates was hired to develop the project after a lengthy competition that took place five years ago.

One of the main minds behind this enormous project is Tom Buechele, Associate VP of Facilities, Operations and Planning. He explained the details of the construction process to F. “There’s two parts to the project. The first part is to take out all that is currently in the first and second floors, and move it into the second floor of the new Legacy building,” he said. “This first part is budgeted at 3.3 million, and the student center itself is budgeted at 6.7 million,” Buechele continued.

The space the school acquired in the new Legacy building will host 26 graduate studios previously located in the Sharp building, plus three large new classrooms for the Contemporary Practices program, one new book lab for the Writing Department, a printing area, and the Articard office. All these changes will be ready this fall.

The first floor of the student center in the Sharp building will house Neiman’s massive, 56-foot mural “Summertime Along the Indiana Dunes,” a piece created in 1965 for the Mercantile National Bank in Hammond, Indiana. This vast space will be completely dedicated to showing student work, and equipped with the necessary technology to do so. Whether students wish to exhibit paintings, make video projections, host poetry readings, conduct performances or anything else, this space is meant to facilitate all of that. A programming board, formed by students and faculty, will organize the events that will take place in this area.

Pages: 1 2 3 4
Like Uncategorized The Long Wait Is Almost Over
« Previous Story