School officials say the new Student Center will be unveiled in April 2012.

The first document Felice Dublon, current Vice President and Dean of Student Affairs at SAIC, received when she arrived at SAIC 26 years ago was a petition from students asking, “Why isn’t there a community at the school?”

Although a long time in the making, it’s an issue that school officials have spent years discussing. “Community is such a difficult concept to define,” Dublon told F Newsmagazine, “so the initial conversation was to ask, what do you mean by community? And what does it mean not to have one?” After a while, it became evident that the school’s spread-out nature doesn’t provide the suitable “hang out” spaces that let students get to know each other — aside from hallways, studios, classrooms and the overused Maclean building ballroom. As a result, a sense of community was lacking among SAIC students. “When we looked at our student satisfaction numbers in comparison with other schools, we were not doing very well,” said Patrick Spence, Assistant Dean of Student Affairs for Campus Life. “There is nowhere to just be.”

As he discussed with F, part of Spence’s job has been trying to make up for that. “Preparing for the year and looking through the pictures of the student events that we have on the campus, I realized almost all the pictures are in the ballroom,” he said. Indeed, the ballroom has hosted almost every student event for years, and Spence agrees with students that the place is “a little awkward.” 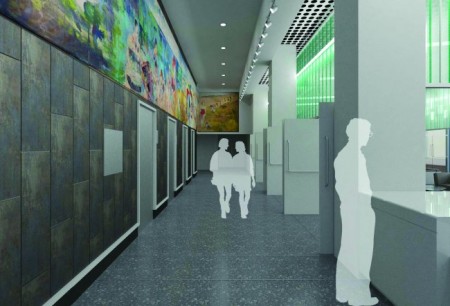 It’s been many years since the petition Dublon mentioned to F was circulated, and the project of building a student center has been a continual struggle up against a limited budget and more urgent needs. “It was a time when the school was growing dramatically — we were only about 1,300 students; now we are over 3,200. The school had other needs, and one of those was to give students a place to live. So, as far as priorities went, we decided that before the student center we had to build residence halls,” said Dublon. After the significant investment that the dorms required was obtained, a new search for funds began.

LeRoy Neiman, one of SAIC’s most recognized alumni, ended the long wait with his generous donation of five million dollars to the school. Cheryl Jessogne, Vice President for Institutional Advancement, told F that Neiman “could not have come to the school himself if it wasn’t for a scholarship, so he feels very grateful to SAIC for that opportunity that made him who he was.” It was under Tony Jones’ leadership that the proposal for the student center was presented to Neiman. The process, according to Jessogne, took a little over a year, but eventually LeRoy and Janet Neiman said yes. “The reason why they accepted is because they believe in the students, and for him it was important to make a contribution to make students’ lives better, and to give back to the school he believes so much in,” said Jessogne.

Pages: 1 2 3 4
Like Uncategorized The Long Wait Is Almost Over
« Previous Story