“Police and Thieves” at the Hyde Park Art Center questions the nature of identity and labels.

The exhibition “Police and Thieves” invites us to question the duality of law enforcement and criminal elements. The show takes its name from the reggae song by Juvin Murvin that tells of the struggle between cops and robbers. Though the show’s curators, Karla Diaz and Mario Ybarra Jr., are based in Los Angeles, “Police and Thieves” brings together artists from both L.A. and Chicago to explore this complex relationship in a variety of media including film, sculpture, photography, and drawing. The featured artists include Gusmando Cesaretti, Arnoldo Vargas, Ben Stone, Ray Noland a.k.a. CRO, Meg Cranston, Amitis Motevalli, and the Los Angeles Poverty Department Collective, also known as LAPD.

The thematic core of the exhibit “Police and Thieves” is an exploration of the roles of hero and villain, and how easily the line between the two can be blurred. Both Los Angeles and Chicago have a colored history in relation to crime and law enforcement, providing plenty of material for the artists. The resulting work covers both ends of the spectrum from the absurd to the thought-provoking.

Chicago artist Ben Stone’s work falls on the more absurd side of that spectrum. His sculpture “Neighbor” brings to life the figure commonly known as “Boris the burglar” that graces neighborhood watch signs all across the country. We can immediately identify what the sculpture represents, but this symbol of lawlessness remains faceless and enigmatic — a mantle that anyone can assume. Arnoldo Vargas takes the too-easily applied label of criminal even further with “Notice to Appear — Defendant’s Copy.” Black and white portraits of fresh-faced, normal-looking high school students are lined up with the police tickets they were issued, mostly for truancy. Labeling these teenagers as criminals seems extreme.

Los Angeles Poverty Department’s contribution, a video titled “State of Incarceration,” presents a critical examination of the effect of prison on the convicted and those who watch over them. The group’s performers, some of whom have served time, are identified by their white t-shirts. Both the performers and the audience cram into a claustrophobic cell filled with wall-to-wall bunks. The video postulates that the inmates and correction officers each try to imagine what the other is thinking — an exchange that the LAPD acts out in a poetic, push-and-pull performance. The video ends with a soliloquy: “By the time you get out, you can’t forgive [the correction officers], you can’t forget them, but most of all, you can’t forgive yourself … How do you move past so much rage?” It forces us to ask, who is truly responsible here?

“Construction of a National Identity”

Another show at HPAC, Stephen Lapthisophon’s “Construction of National Identity” is an 80-foot long installation of found materials. Lapthisophon, who is of Thai and Irish descent and spent many years in Germany and Italy, intends the installation to be a commentary on the fragmented nature of identity. The idea of construction is referenced in a literal way, through the use of scrap wood and platforms carefully situated along the length of the hall. Color, sound, food, and drippy, loose writing scrawled on the wall help to divide the space into what the artist calls “events.”

These events appeal to different senses, with visual, aural, and tactile stimuli. A wall painted with the word “night” in different languages is juxtaposed against a field of deep blue paint on the other side of the hall. A piece of brown paper left on the floor holds a small pile of rice — a grain that is a dietary staple in many different countries. Speakers provide an exotic soundtrack of bird cries, travel noise, news reports, and foreign language instruction tapes, repeating phrases in English and German.

The fractured nature of these events alludes to the fractured nature of identity, allowing the viewer to create her own interpretation of the offered material, drawing on the associations that are suggested by her own culture and experience. Whether or not this experiment is entirely successful is uncertain. But Lapthisophon’s concept is compelling in the way it forces us to examine how we see ourselves in relation to the art — construction of meaning is not just the sole responsibility of the artist, but of the viewer as well.

“Construction of a National Identity” and “Police and Thieves” invite us to question the snap judgments that we make about other people and the way we view ourselves. And they show us that labels can be challenged and identity is fluid — and recognizing this is important for better understanding ourselves. 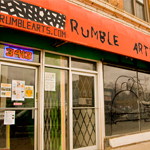 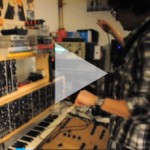