In mid March, Humboldt Park residents received notification that a new business had applied to fill the vacant storefront—formerly Ten Human Performance Center—at 3201 W. North Avenue. That business is Cash America, a corporate-owned chain of pawnshops headquartered in Texas whose franchises are operated throughout the city of Chicago.

A town hall meeting was called in late March to discuss the implications of Cash America’s proposed move into the neighborhood. Concerned community members pointed out that Aaron’s Jewelry & Pawn Shop, a family-owned pawn shop that had been in business for over 17 years, was located just a block away from the proposed location of the franchise.

Aaron’s Jewelry & Pawn Shop partially helped finance Rumble Arts Center, a multicultural community art space at 3413 West North Avenue. Thus, Rumble Arts became the inadvertent poster-child for the petition against the invasion of Cash America in a stretch of North Avenue that is already home to a slew of corporate chains who profit from low-income communities, like Western Union, Family Dollar, and McDonald’s, to name a few. 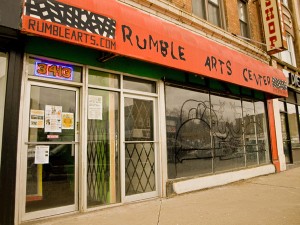 Brook Woolf, Executive Director of Rumble Arts, said the issue was much larger than just Rumble Arts; it was an issue that could adversely affect the entire Humboldt Park community. On March 28, Rumble Arts issued a statement on their website cautioning that “if Cash America gains a foothold in Humboldt Park, it will set off a devastating chain of events that will result in fewer financial, cultural, and educational resources for our community.”

Through their website, Rumble Arts asked for community support in the form of an online petition against Cash America’s proposed new location. Though the petition is now closed, it had accrued nearly 1,000 signatures by mid-April.

A second town hall meeting on this issue was held on April 12 at the Humboldt Park Field House. This time, residents invited representatives from Cash America to hear their side of the story. But when the representatives presented their case in a slide show, they incorrectly spelled “Humboldt Park” without the letter d. Community members joked that if a business couldn’t even correctly spell the name of a neighborhood, how could they expect to move into it and provide a positive impact? 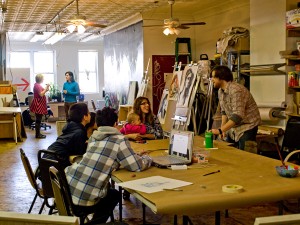 For Woolf and Rumble Arts staff, Cash America’s potential presence is only the latest hurdle in a series of setbacks faced by nearly all nonprofit organizations in Chicago. Woolf explained that 80 percent of available state and citywide grants got cut last year, and the remaining funds will get cut by another 80 percent this June. This leaves Rumble Arts with just five percent of the grant funds available to them just two years ago.

One way Rumble Arts has been coping with a smaller budget is by merging their initiatives with other local nonprofits that share similar missions. “If [other nonprofits] don’t necessarily have the money but we have the space, and we don’t necessarily have the market,” Woolf explained, “[collaborating is a way] to bring in more people and expand our ability to reach a much larger crowd and space.”

Despite drastic losses of funding, Rumble Arts continues to offer 22 different art, dance, and music programs on a donation basis to the general community. “We’re really trying to reevaluate what family means to people, to bring the families together and bring the community together,” she said.

Woolf and the Humboldt Park community await the second and final hearing with the Zoning Board of Appeals on May 20 at City Hall, 121 N LaSalle Street. All are welcome and encouraged to attend. 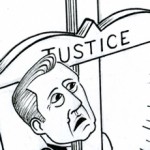 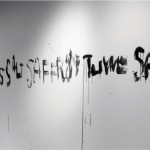