Live at the Empty Bottle: The Crystal Stilts

The Crystal Stilts worked last Friday, May 20, to transfix the crowd and serve up their daily dose of psychedelic hypnosis.

Crashing into a locked groove immediately, The Crystal Stilts worked last Friday, May 20, at the Empty Bottle to transfix the crowd and serve up their daily dose of psychedelic hypnosis. The house wasn’t exactly crowded that night, but that worked better for the quintet, as a keen sense of expansive space was needed to fully appreciate the band’s ability. Throughout the night, the opening bands worked to build the energy in raucous punk fashion. And as if aware of the need of an anti-climax, the Stilts worked their way into an hour-long sedated jam. 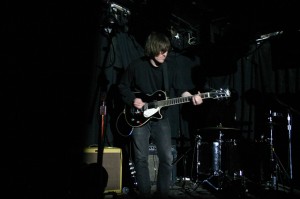 Under the spell of ‘60s garage band haze, the band was unwavering in their noisy and sometimes-melodic aesthetic. Even as technical difficulties and unflattering sound system dynamics plagued their set, nothing could stand in the way of the steamrolling force and monstrous racket channeled by the band. White light bathed the stage, hiding nothing from the crowd and yet revealing nothing about the music’s craft.

If there was anything lacking from the set, it was a sense of precision, which is always overlooked in a guttural punk-ish performance. The spirit of the Crystal Stilts harnessed that energy, but it was their execution that needed subtlety. The Crystal Stilts struggled to merge their craft with their vision, playing with fiery resolve at frantic paces, but without a fully developed aura of accuracy. 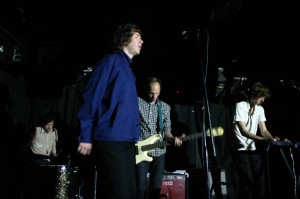 The show drove onwards consistently, sparking old-school dancing and head bobbing all within the house. Those who came out that night had something to expect having listened to the records released by the Stilts. On record, it was something intangible and ethereal, transcending pop structures for nuanced repetition and glorious garage-y fan service. In person, the charade ended and the hazy barrier dropped out of sight. The mystery was more suited for headphone space on a lonely night than for a venue soaked in glittering disco ball reflections. 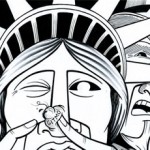