I think what we need to realize is that what we call our location is increasingly shot through with connections to the rest of the world, especially in a globalized economy. 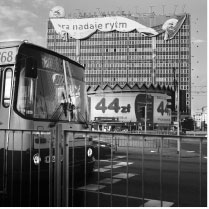 BW Your previous photographic work deals a lot with issues pertaining to globalization—photos of people that are explicitly and intentionally political. “Polonia” is different. I like to think that lately, in light of economic instability, in art, in politics, people are considering their immediate surroundings, that people are maybe trying to hold one another up, to carry each other. Does “Polonia and Other Fables” address this idea at all?

AS I think what we need to realize is that what we call our location is increasingly shot through with connections to the rest of the world, especially in a globalized economy. People may want to retreat into the personal or think that the personal is the end all-be all, their certain circle of Facebook friends, whatever… It’s like the limit of the real, but that notion of immediacy and connectivity wouldn’t exist without technical mediation, which is itself a product of forces of production and communication that have a global basis, so there’s no escaping it. Now, it seems that it’s all about yourself, so I am certainly not putting my family in this exhibition as a way to point in that direction, because that’s the direction people are taking anyway.

BW There is a quote on the wall in this show that says, “Poland is the 51st state,” beside some photographs of CIA ‘black sites.’ The wall text says that the film was confiscated. Is there a story behind that?

AS The fact that the film was confiscated may or may not be interesting. What’s interesting is what one makes of the fact that the United States is able to mobilize other countries to assist it in circumventing its own laws and often in violation of the laws of the country that is assisting, and all of this is happening in secret. The Polish government doesn’t admit that any of this happened, and the American government admits it happens, but won’t say where. It exists in a gray zone of acknowledgment and non acknowledgment—it’s part of the politics of the moment. Are these policies continuing? Have they ended? Are we to believe the government? It seems that the real question isn’t what happened to me or whether or not I had to crawl in the bushes to get this photo. What interests me is the structuring of a kind of argument or providing a tool kit and a way of saying, through the montage of the exhibition, that all of these things are connected…

BW Speaking of labor, there is a segment in the written component of Polonia that talks about a Polish guy and a Mexican guy on the north side of Chicago standing in a gas station parking lot, waiting to be picked up as day laborers. The gas station is owned by a Punjabi guy. Then there are these photos of Polish workers in Poland, building a boat. Is there an allegory here?

AS They’re all kind of in the same boat: one guy has bought a gas station and the other two are just doing day labor, but they are all immigrants, they’re all struggling, all kind of marginal, but I don’t know if I’d say anything is an allegory of anything else. Sometimes things are just an allegory of what they are and you just have to see them with a heightened sense of their presence, their reality … The history of migration is a history of people reaching an economic dead end. They sense that the situation is impossible, often because, with really unrealistic expectations, they come to a place and discover that its much harder than they thought, that the streets are not paved with gold, there are people who make a profit from misleading others, which is not to say that there aren’t many people who come to America that end up realizing (through hard work and struggle) that there is an advantage.

BW The way that the written component of Polonia is structured is somewhat episodic, the short descriptions are like snapshots of ideas, memories, opinions, criticisms, etc. … I wonder what the relationship is between the narrative of the writing, and that of the photos. Are they in direct conversation with one another?

AS It’s more indirect. There is a relay that’s set up and it’s up to the reader to make connections. Sometimes I am thinking about a photograph, sometimes not. Sometimes I am thinking of a photograph that never got made. What these aren’t, is captions. I have been interested in the difficulty, of say, going to a film screening and being handed a program, or production notes, and then the lights go down, and you can’t read it; it’s like watching a foreign film with subtitles. If you have to spend so much time reading, you miss the image, so that’s what these texts are about.

BW I wonder if these documents are more for the reader, the viewer, or more for the organization of the work, for yourself? 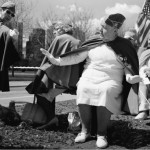 One Response to An interview with Allan Sekula