Will the Chicago Summer Games be revitalizing or parasitic?

Chicago’s official Olympic Bid Committee, which calls itself Chicago 2016, derived its logo “Stir the Soul” from a quotation by the architect and urban planner Daniel Burnham: “Make no little plans; they have no magic to stir men’s blood.” But it may be that Burnham’s use of the word “blood” actually better captures the anxiety of Chicagoans, thick in economic crisis and political scandal, envisioning the fate of their city seven years from now. Proponents of Chicago’s 2016 Olympics bid assert that the games will bring great benefits to the city: economic stimulus, urban renewal and improvements in infrastracture. Opponents warn of exactly the opposite: large debts, displaced populations and useless stadiums. So will the Chicago Summer Games be revitalizing or parasitic?

Chicago 2016 views the Olympics as an opportunity to revitalize the city—like a modern version of the 1893 World’s Columbian Exposition, which led to the City Beautiful Movement. Working with architects Skidmore, Owings and Merrill, they hope to emphasize green building and sustainability in the projected Olympics constructions. Calling the bid “a responsible, conservative and feasible plan,” Chicago 2016 proposes that 79 percent of the events would be held in existing and temporary venues (11 temporary venues would be built). “We have always looked at utilizing existing facilities and parkland, unlike a lot of Olympic bids in the past,” said Patrick Sandusky, Vice President of Communications for Chicago 2016.

The projected cost for the Olympics, including the Olympic Village and venue construction, is $4.8 billion. The bid anticipates netting $1.2 billion from sponsorship and marketing, $705 million in ticket sales, and $85 million from the city to be spent on Michael Reese Hospital campus on the South Side. This leaves an estimated $1.1 billion, projected to be paid by private funds—an amount whose future availability the International Olympic Committee must take on faith. Additionally, the bid does not include a full government guarantee, but rather a promised $500 million in the event that the final cost exceeds the original budget. 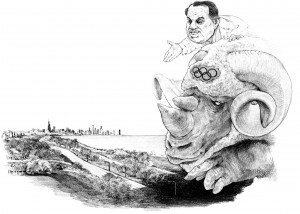 Robert Baade, Professor of Economics at Lake Forest College, points out that the projected ticket sales, which assume 7.6 million tickets being sold, might not be reasonable, since the discretionary spending of potential visitors will most likely be heavily affected by a deep and prolonged recession. So, while Chicago 2016 officials say that no taxpayer dollars will be used on the Olympics itself, this does not seem to be viable. Tax Increment Financing (TIF)—which designates future property tax increases to finance current projects—will be used to finance infrastructure costs. Community watchdog groups are mobilizing to create a community advisory committee, in order to prevent misuse of these funds.

Dr. Christopher Shaw, a speaker for the No Games group, which opposes Chicago’s 2016 candidacy, contrasted “the kittens and rainbows” plan of bid committees with the housing shifts he describes as “economic cleansing.” What this means, is that the restructuring of the South Side to cater to the Olympics may result in unreasonable evictions and intentional displacement of economically depressed populations.

In response to this concern, Sandusky told me, “We will have no displacement of residents. Secondly, we will be looking at going into communities that could use new facilities.” For example, he proposes that a multi-sport facility in Douglas Park and an amphitheatre in Washington Park “will be a long-term benefit to that community.”

The most expensive venue proposed is the $397.6 million Olympic Stadium in Washington Park. While this structure is described in the bid as permanent, Philip Hersh of the Chicago Tribune, called it “largely temporary.” In other words, after the Olympics it would be “reconﬁgured” to accommodate community athletic competitions and activities. However, Baade worries that the current plan “is not sufficiently robust or visionary to remake the city in a way that will encourage those who come to the Olympic Games to come back and leave an economic legacy.”

President Obama has come out in support of Chicago’s bid, submitting a letter endorsing Chicago 2016 and stating that he hopes to announce the opening of the games during his second term in office. “I don’t think Barack Obama can say the Olympics are a bad idea for Chicago without committing political suicide,” said James Thindwa, Executive Director of Chicago Jobs with Justice, a labor-community coalition. “The Olympics have a social and cultural appeal, and politicians don’t want to be on record opposing them.”

The good feeling for Illinois politics prompted by Obama’s victorious election was cut short by the media blitz surrounding the Blagojevich scandal. Former Governor Blagojevich’s impeachment prevented the inclusion of an additional state guarantee of $150 million in the bid. When asked if this could put Chicago in an unfavorable light in the eyes of the International Olympic Committee, Professor Helen Lenskyj, a University of Toronto sociologist and author of three books on the Olympics, said she does not think the scandal “will show up on their radar because their own members have committed worse offenses than that.”

Sandusky said much the opposite. “The IOC is a group of people that brings the world together in a festival of harmony, unity, and sport. It has more member-countries than the United Nations and has promoted peace more than any other organization in the history of the world.”

Considering the diametrically opposed and contradictory assertions of the various factions entrenched in the debate over the possible impact of the Olympics on Chicago, it seems that Chicagoans will either be sky-rocketing to work on a solar-powered CTA or squatting in the abandoned and derelict buildings of Olympic Village. Of course, a middle ground is the realistic result, but neither Chicago 2016, nor No Games and other opponents to Chicago’s bid, seem willing to offer rational suggestions. As Baade concluded, “There’s always the possibility that Chicago would be victimized in the same way other cities have. But I don’t know that we should throw out the baby with the bathwater on this and say well then we should never host these kinds of things.” 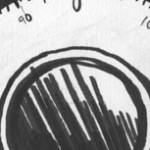