from the archives: My F’ing advice

Super-helpful advice on how to maintain sex appeal AND look smart this Halloween.

School’s in full swing here, and everyone’s buzzing around with the determination of army ants, marching in fast-forward through their work routines. But the whirring pace of learning and art-making and theorizing and crap doesn’t keep you artsy folks from asking me what I think you should wear for Halloween, so I’ve provided one really good idea that everyone can use.

I’ve been losing a little bit of writerly steam this semester, due to grad school applications and being really focused on how perfect the transition from my ass to my thighs is, but lucky for me I have a bevy of oily, mostly naked men with gold letter openers to keep me interested in writing.

It’s especially interesting when the letters get stuck to their slick bods and I have to peel them off, and then I try to read the letter, but the oil has made the paper transparent, so I have to slap it up against the wall, where it just sort of hangs there, slowly sliding down the wall … Luckily your letters have been pretty short this month, so I can read them before they hit the floor. Thank god for brevity!

What do you think this costume would cost? Three hundred dollars? Six hundred dollars? NO! For you, SAIC, and all the other trick-or-treaters out there, I’m supplying the latest trends in Halloween fashion for the low low price of NOTHING.

Not only is this costume idea free and hip, it’s easy to make and raises the bar on sluttiness. What follows are instructions that will make your Halloween super special and extra fun.

1. Get some cardboard. Make sure it’s big enough so that you can cut two right triangles out of it and it will cover your entire torso. Even better if you can get something big enough to go all the way down to your mid-thigh. You don’t want to make everyone crazy do you? Let’s leave some room for the imagination, you sassy thing!

2. Go to the suburbs. Get on the Metra or take the bus to the edge of the city so you can buy some spray paint. Mayor Daley no likey you buy spray paint in Chicago. You’ll need some spray paint to paint your right-angle triangle. It’s also helpful to have some spray paint around for when the warring gangs in your neighborhood repeatedly tag your front door; you can add to the graffiti-mix. For example, I made a stencil for my front door that says “Shoot ’em up losers” and another that reads “Wah wah I’m in the ghetto. I’m a big baby.” Now no one spray paints my front door because they’re all too busy breaking my windows.

3. Go home and paint your angles. Now it’s fun time. After you have cut your right-angle triangles out (use a protractor to get that perfect 90-degree action), prop them up on your neighbor’s car and spray them with the color you selected from your favorite suburb. Don’t forget to get the edges really well! No one likes a crappily painted right-angle triangle.

4. Now it gets tricky. This is the part where you really have to think. Are you a boy or a girl? If you’re a boy, it’s time to get out an Exacto knife and cut a hole in your triangle for where your weiner will hang out. If you’re scared of getting a cardboard chafe on your weiner, pad the hole with flannel or something.

If you’re a girl, just make sure that one of your boobs hangs out over the edge of the right angle. If you have really symmetrical boobs, you can cut a hole in the tip of the triangle for your other boob. But since most women don’t have symmetrical boobs, it might be best to leave one in hiding. Plus, that one hidden boob will keep them guessing!

5. Last touches. I bet you thought having your reproductive parts hanging out of your costume was all you needed. Think again! You have to hold the costume together somehow, so get some string and put some holes in your cardboard. Make some straps to go over your shoulders, and some side-ties to hold the triangles together, and you’re in business.

That should do it. You’re bound to get laid when you’re making the goods available to the eye of your love interest. Just make sure that you cover your piece up before you go outside in public, ‘cause you might get arrested. Happy Trick or Treating everybody!

Uncategorized from the archives: My F’ing advice
« Previous Story 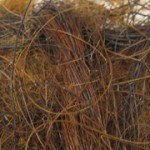