Is “The Menu” a tasteful movie or simply a tasty meal? 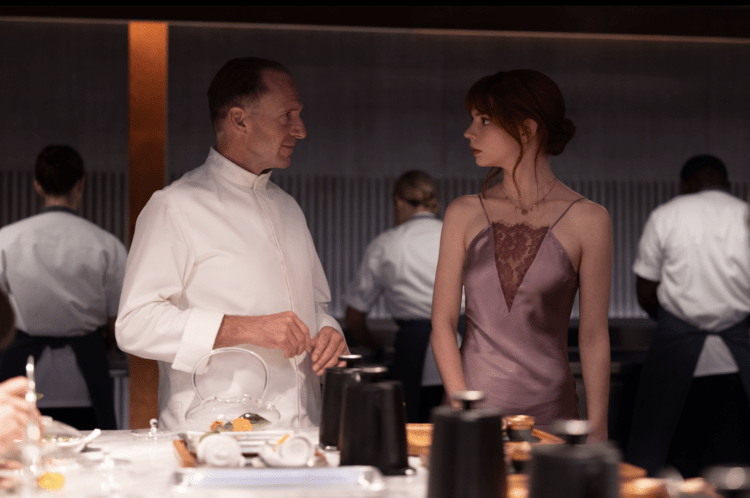 Our tongue is a powerful, boneless muscle, more akin to the octopus’ tentacle than our own biceps. It’s incredibly strong, and one of the most sensitive parts of the body, covered with thousands of receptor cells that work to extract flavor from our food and send a signal to our brain.

But for all its skill, the tongue is no accounting for taste. No matter how delicate the taste buds, how strong the muscle, or how many hours were poured into the meal on the plate, nothing can make someone appreciate a flavor they don’t like.

Thankfully, director Mark Mylod’s newest film, “The Menu,” has a little something for everyone. There’s drama, there’s jokes, there’s an edge, there’s bite, there’s bitterness, sourness, and in the tiniest morsels, the slightest trace of sweetness.

In “The Menu,” a critic, an editor, three finance bros, a fading movie star and his assistant, a rich man and his wife, and a foodie and his date dine at an ultra-exclusive restaurant with world-renowned Chef Slowik, played by Ralph Fiennes. But as they eat, it’s clear there’s something else cooking.

I won’t say more than that because so much of what makes “The Menu” such a good time is its twists. Every person at the restaurant has a secret, spilling out in drips as each course is served. It makes for a riveting time, especially with this cast.

Some of the performances in this film keep the tone light, while others slowly ratchet up the tension. The triumvirate of finance bros played by Rob Yang, Arturo Castro, and Mark St. Cyr are delightful douchebags: smug, entitled, and not used to being denied. Hong Chau is incredible as the maître d’, her smile concealing a deep disdain for her customers all covered by the veneer of hospitality. John Leguizamo is fantastic as a falling star, unable to hold onto his precious personal assistant, played by Aimee Carrero who is eager to escape his shadow. There’s a lightness of touch in the customers, that perhaps contributes to our dislike of them, that’s countered by the much heavier staff.

The film’s three leads have to tow the lines of both light and dark. Nicholas Hoult is hilarious as the pretentious food snob, whose pretensions lose their humor when they become selfish obsessions. Anya Taylor-Joy, the film’s lead, is good as always, biting, charming, and sharp. She’s the primary vehicle through which we understand the restaurant, which also primes us for the other diners’ snobbery. We never buy into the restaurant’s prestige or awe because our main character is actively disinterested.

This makes for a curious push-and-pull once Chef Slowik enters the picture. As opposed to the trailers, Fiennes is not a conniving Bondian supervillain. He’s a much more sympathetic character than you’d expect, obsessive yes, borderline violent yes, but also you understand the fanaticism. Not because he exudes such charisma, but because his performance as the character is as vulnerable as he is vindictive. It’s a surprisingly tender performance, especially given the extremity we expect from both Fiennes and this character. Fiennes is the anchor for the whole film, and so much of my enjoyment stemmed from watching him chew his lines, playing the character in an understated, surprising way, as opposed to the film’s marketing which made it appear like it would be a cheap Gordon Ramsay impersonation.

“The Menu” largely doesn’t go for cheap laughs. It has its own sense of humor that works without rupturing the reality or tension of the world. Fans of HBO’s “Succession” will recognize these sensibilities, being familiar with director Mark Mylod, one of the HBO show’s directors and producers. “The Menu,” though less intentional in its depiction of the uber-wealthy, is just as funny as “Succession,” with an excellent sense of timing, all grounded in its characters’ egos.

People looking for an incisive social satire will be left wanting: “The Menu” is not a robust indictment or portrayal of class politics. It uses that as an excuse to tell its gastronomic story, the loose spine holding it together. Though conceptually it may seem similar to the higher-brow fare of “Midsommar,” it’s actually much more tonally similar to this year’s “Barbarian.” Both “Barbarian” and “The Menu” use current-day issues as an excuse to take its character to darker places, but neither of them make you think deeper about the issues they present. But like with “Barbarian,” what makes “The Menu” pop is its sense of humor, and its willingness to really twist the knife and surprise you.

If “The Menu” is a metaphor for anything, it’s not class. It’s a metaphor for the act of making art. One of the film’s central questions is who owns the work: The viewer? The taster? The consumer? The artist? The creator? The chef? Does the work’s intention cease to exist once it’s been processed by its audiences’ taste buds and eyeballs? And what does that do to the artist who’s put their whole life into pursuing unattainable perfection? All of these questions serve “The Menu” much better than its toothless depiction of class.

That said, the latter doesn’t do enough to detract from the film’s sense of play; it’s merely in the backdrop, a minor ingredient in a much larger, enjoyable dish, a shallowness overcome by the film’s comedy and its delightful ensemble. So even with its flaws, though “The Menu” may not be tasteful, it sure is tasty.