Is there really much more to learn from American military success stories featured in film? 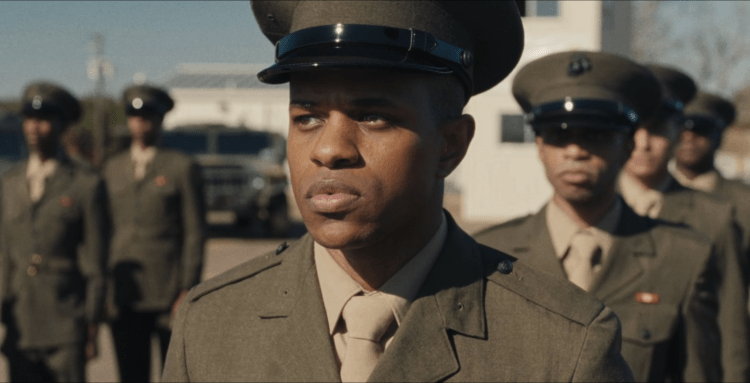 In “The Inspection,” writer-director Elegance Bratton revisits his own history as a queer Black man, attempting to enter the hallowed halls of one of the USA’s most celebrated institutions: the U.S. Marine Corps. That drive is something that’s been explored many times in cinema, though often with differing levels of reverence for the institution itself. Bratton, in this film, borrows greatly from the themes of Stanley Kubrick’s “Full Metal Jacket” (1987), which followed recruits training for the Vietnam War. “The Inspection” leverages some of those ideas, like the annihilation of the self, the honor of the uniform, and the wanton cruelty that fills men with power. But outside of the film’s central relationship between its protagonist and his mother, “The Inspection” doesn’t push far enough to generate a perspective of its own.

It feels necessary to mention that I’m not without military experience. Of course, my training in the mandatory Singapore Armed Forces is nothing compared to the grueling physical treatment of the U.S. Marine Corps. However, even though I was conscripted and did not choose to enlist like Bratton, in some senses, the psychological pressures I experienced are similar. This experience does color my lens slightly. But oddly, my closeness to the subject matter does not make me engage deeper; instead, it keeps me at arm’s length. It makes me more critical of the institutions of the film, and eliminates the curiosity other audiences may have about the idiosyncrasies of military life. There’s many hurdles the film needs to overcome to get me, as a specific audience member, to become emotionally invested.

The film doesn’t do much to help that, giving us the barest snippets of its protagonist, Ellis French played by Jeremy Pope. We only get peeks into his life before enlistment, after he has already decided to become a Marine. I can understand why the film does this, to perhaps depersonalize French, to give us a general understanding of his life as a queer Black man, allowing us to project our own understandings onto him. But that same choice keeps us from ever feeling like we really know French, nor do we understand why he’s chosen the Marines until much later in the film. Again, this could be a situation where my own conscription and lack of connection to the U.S. military are hurdles that the film needs to overcome, to convince me as an audience member why a person would choose to enter such a cruel environment.

For that same reason, French’s persistence despite the sadism of his superiors and the apathy of his fellow recruits never rings as inspiring to me. At one point, French says to Ismail, a recruit constantly subject to Islamophobia, that if the two of them leave, their tormentors win. Perhaps this may be true for someone who buys into the ethos of the Marines, as exemplars, as worthy defenders of the American empire, but it did little for me. It did even less for me when the platoon begrudgingly accepted French despite their homophobia after French proved himself to be as cruel as them. The film does not stop to unpack this idea, instead, it flattens it with a roaring “Oorah!” For most of the film, I was rooting for French to quit, to find value in himself outside of the uniform, or, as he is tempted at one point in the film, to at the very least disrupt the mechanisms of power in his platoon.

Perhaps none of these things could happen because they are not what Elegance Bratton actually did. As mentioned, this movie is a reflection of Bratton’s real experiences as a queer Black man joining the military. But more pertinently, the emotional core of the film is French and his estranged mother, which replicates Bratton’s own relationship with his mother, who abandoned him when he came out of the closet. These are the scenes of “The Inspection” where the film works best because Bratton is not borrowing the vocabulary of other war films. This is his own story of his mother, who passed away four days after the film was greenlit. Gabrielle Union is unflinching as French’s mother, a woman who had built up so many walls that French impossibly tries to tear down.

This is the very rare film that would benefit from a longer runtime. We’re given vague outlines of the rest of the platoon, but nothing that really makes us care about them or their relationship with French. In this way, it feels like Bratton is assuming we will color in the rest of these personalities because we either know men in the military or have seen enough of them onscreen to connect. Bokeem Woodbine is nightmarish as Laws, the punishing cruel sergeant. But his monologue to justify his behavior doesn’t quite add depth beyond his relentless sadism. Raúl Castillo, on the other hand, is given ample room to add shades and textures to his character, Rosales, another marine trainer who answers to Laws. Castillo finds the tenderness and toughness in Rosales, all still trapped within the Marine Corps in a constantly surprising performance. It reminds me of his excellent three-dimensional character work in “Cha Cha Real Smooth,” and has me looking forward to more of him in the future.

This film being semi-autobiographical ultimately means that French (Jeremy Pope) is the real star. Pope is fantastic at the role despite the script’s limitations. He delves deep not just in the individual moments of stoicism and suffering, but also in his arc across the film. Pope shifts his characterization of French as the film moves, capturing just how this boy is being hardened by his training. Pope is masterful with small gestures, like the tightening of the jaw, the softness of his hand, the rigidity of the shoulders. This is all especially important because the character he’s playing is rather thin, despite being in almost every scene.

Some of my criticism of “The Inspection” stems from the leaps Bratton expects us to make, borrowing from other films about military training. But the largest part of my dissatisfaction has to do with its central character, French, and where the film leaves him. He has been beaten, harassed, near-killed, all for the sake of this uniform, a uniform which grants him the respect of his fellow Marines that would otherwise hate him. Are we meant to feel empowered? Should we be inspired, knowing that French could overcome the vitriolic and violent homophobia of his peers by proving his worth in an encircling death machine? All I could manage by the film’s end was bitterness, which I do not believe to be the filmmaker’s intention.

Perhaps that’s me projecting my own time in the armed forces onto the film, asking it unfairly to account for me, the main character of the universe. But I can’t discount the sour aftertaste the film left for me, with Bratton constantly on the cusp of saying something deeper about the military, homophobia, and masculinity but never crossing the threshold. It’s selfish of me, but if you’re going to make me relive such a dreadful time, you have to make me consider something new. I think the film could have done so with maybe half an hour more of exploration, of deepening its side-characters and its themes, or perhaps refocusing its efforts on different aspects of Bratton’s story. Because as it stands, the military success story the film portrays moves me very little, and his relationship with his mother was far more affecting. It’s a promising debut from Bratton, who I hope veers away from the military in future, if only for my sake.

How Strange is Disney’s ‘Strange World?’