You’re going to need a strong stomach for the gruesome love story of “Bones and All.” 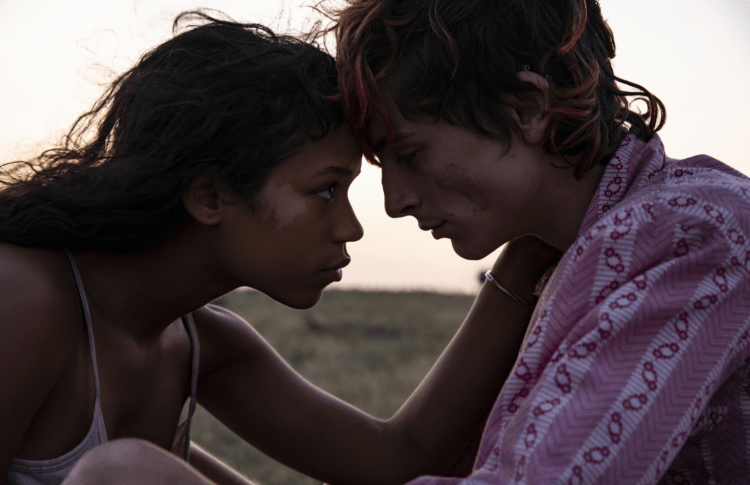 Movie still from “Bones and All” (2022) featuring Taylor Russell and Timothée Chalamet.

The average human finger has roughly the same density as a raw carrot. That’s an unfortunate fact that I learned and now you know too. And if you’re anything like me, that fact is unnerving not just because you just tried gnawing your finger but because it’s difficult to know that so little, at least physically, stops us from eating one another.

Luckily we’re programmed to avoid such faux pas. But what if we weren’t? What if select members of our species were designed otherwise? That instead of shunning the long pork (a term you now also unfortunately know), they craved it? And what if they were not like zombies hobbling for brains, but instead people just like us? People with parents, friends, children — just ordinary people who sometimes crave human flesh.

Luca Guadagnino’s new movie, “Bones and All,” crafts this exact world, adapting the novel of the same name by author Camille DeAngelis. The story follows two young adults, Lee, played by Timothée Chalamet, and Maren, played by Taylor Russell, two fellow Eaters, the term used to describe people with an insatiable hunger for long pork. The two characters decide to stick together, and travel through the American countryside, stopping for some snacks along the way. There is perhaps a temptation to view this film as a metaphor for some maligned group in society. But there are no real parallels for the Eaters, who each have their own sets of rules and methods of survival. Instead of discussing one singular group, the film is instead a treatise on loneliness, on what it does to someone to understand they are an active threat to the people around them.

For that reason, our sympathy is torn. We see the tragic paths these characters were driven to, but we also watch them gorge on human bodies rendered in great detail. There’s a push-pull throughout the film as we watch Lee and Maren connect while cruising down empty highways, shortly before ripping into someone’s abdomen. Personally, I found myself more pushed than pulled. I couldn’t help but be repulsed even though the film rarely utilizes the usual tricks of horror. Instead, the film’s visuals are disturbing precisely because it’s depicting cannibals as they would exist in our world, with bones crunching and blood drying, red stains left on skin and teeth. Films have no obligation to make likable characters. But when the film’s core is a romance, it becomes harder to connect.

This is especially the case as the film reminds us that the Eaters do not possess any empathy for the victims. It’s firmly established that Leon and Maren are not like us, in more ways than one. Whether you can get past those bloody differences determines if you’ll be moved by their relationship.

Beyond the two protagonists, there is also the film’s large cast, some Eaters, some not. Michael Stuhlbarg plays one such Eater, another roamer, with an uneasy, almost too casual approach to consumption. André Holland plays Maren’s father, tortured by his parental obligations and the trail of bodies his daughter leaves behind. Holland is vital to this movie; his performance affects so much of how we view Maren’s story. Normalcy is forever out of her reach, despite her father’s best attempts, but still, she strives for it. Rounding off this cast is Mark Rylance, in all his scene-chewing glory. Rylance plays Sully, the oldest Eater of the film, who has developed many particular traits to enable his survival, including a speech pattern like no other. Rylance delivers each line like it’s his last, with a frightfully enjoyable performance from an actor who usually is restricted to playing the role of serious, older gentleman.

Russell and Chalamet have a good amount of chemistry, a tenderness that helps ease us softly back into sunlit car rides away from the corpses in cornfields. Russell does an incredible job with her character, portraying the cusp between childhood and adulthood that Maren is caught in. Chalamet’s character, Lee, is much more settled into his world, and we can see why Maren would fall for him. That said Chalemet, as with some of his other performances like in “Dune” and “Little Women” has an unsteady handling of his accent, especially in emotionally fraught scenes. I am hardly a dialect coach but one scene had me wondering if he had ever had an accent at all, if I had made it up, gaslit myself into believing he did, but then the drawl came sauntering back in the next scene.

I can’t say I enjoyed “Bones and All.” It’s a visually arresting film, beautiful and luxurious with its landscapes, chilling with its violence and gore. But outside of what I was seeing, I was not emotionally hooked by its story. The film’s foreshadowing almost verges on excessive, constantly letting us know the danger that’s looming and eventually coming  to pass. And when tragedy eventually strikes, I found myself still too pushed away by the film’s commitment to gory realism to emotionally invest. Perhaps it’s my own queasiness. Maybe viewers with stronger stomachs than me will find their hearts ripped open by this romance. But by the film’s end, I found my insides completely intact. Just as I usually prefer them to be.

Entertainment, Series Moving Pictures: “Bones and All,” Minus The Heart
« Previous Story