CIFF 2022 | ‘My Policeman’ Review: A Certified Crowd-pleaser… if You Ignore Harry Styles 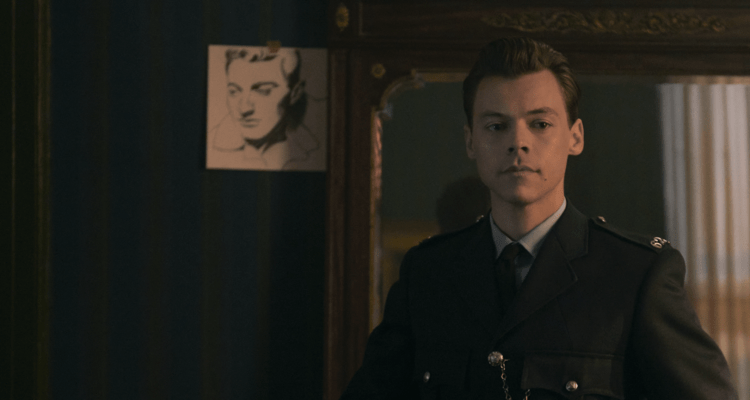 These days it seems like everyone and their mother is riding the Harry Styles hype train, and Amazon Studios is no exception. After “Don’t Worry Darling” crashed and burned spectacularly in a haze of both lurid tabloid gossip and extremely unflattering reviews, “My Policeman” initially came off as a second chance for Styles to improve the otherwise lukewarm impressions that film critics (and anyone else who isn’t a die-hard fan of his) might hold regarding his acting. Plot-wise, it seemed like it would be the complete opposite of “Don’t Worry Darling,” instead focusing on a gay love affair in the 1950s between policeman Tom Burgess (Styles) and fine art curator Patrick Hazelwood (a spectacularly wry David Dawson), even as Burgess remains married to schoolteacher Marion (Emma Corrin); and the ramifications of that affair on all their lives 40 years later.

If it were 2016, “My Policeman” would be groundbreaking; in 2022 it just feels sedate and banal. Compared to its counterparts in the family of high-art LGBTQ+ films that the wild success of “Call Me By Your Name” spawned, “My Policeman” could be described as the weird quiet cousin who nobody really notices is absent until someone points it out. One thing it is certainly not is vital gay representation. In fact, at times it feels like the opposite; often devolving into stereotypical period piece euphemisms about “innocence” and “curiosity” and “exciting but frightening” sensations that are so overdone they threaten to drag outdated gay archetypes right back out of the closet of history.

What’s worse is that “My Policeman” falls into the same Hollywood habit that queer filmmakers have been railing against for decades. The plight of gay people before the decriminalisation of homosexuality is well-known by now; there’s absolutely no need for gay-bashing violence onscreen to get any kind of message across. Yet the film contains multiple such scenes, including a particularly gratuitous and bloody scene in which Patrick is beaten up by his cellmate in prison, completely unprovoked. “My Policeman” is no “Fireworks;” no “Querelle.” It would have sufficed to include a subtle hint of violence, but Michael Grandage’s clear ambitions to position himself as some kind of modern-day Kenneth Anger means that straight viewers are forced to don the hair-shirt of witnessing anti-LGBT violence, while queer viewers have to just sigh and shut their eyes and wish they were watching “Portrait of a Lady on Fire” again.

Performance-wise, it’s clear that “My Policeman” was made specifically as a vehicle to boost what some might call Styles’s burgeoning acting career, and what others might call an unnecessary and unwanted cash grab from one of the world’s biggest pop stars that needs to cease and desist instantly. Styles’s name appears in the opening credits before the film’s title — the kind of privilege that only the best and brightest actors were given is now apparently afforded to those who have two and a half acting credits to their name, one of which was pretty bad. And now, after having seen the film all the way through, it feels like a grave injustice that Dawson and Corrin don’t also have their names in lights pre-title, seeing as they’ve clearly had to work twice as hard to compensate for Styles’s grievously underwhelming lead performance.

Drawing on her star turn as Princess Diana in “The Crown,” Corrin is the perfect choice to play Marion in all her wounded dignity, while Dawson’s seemingly bottomless well of charisma and versatility onscreen ensures that Patrick will work his way into viewers’ hearts as quickly and easily as he did Tom’s. But therein lies the rub — Styles is stodgy at best and genuinely inept at worst, delivering some of his most crucial lines with nothing more than a blank expression or a one-note timbre. Thankfully, we are saved from having to see much more of Styles’s fumbling as the trio’s lives in the 90s eventually take up more of the narrative, allowing Gina McKee to remind us of what good, emotive acting really looks like as she embodies an older Marion with somber, rational gravitas. Linus Roache and Rupert Everett also do their best as now-elderly Tom and Patrick, but the emotional weight of their scenes hinges mostly on the script, which strangely constrains the limits of the performances they are allowed to give.

“My Policeman” occasionally does manage to break free of mediocrity by tugging at the heartstrings of more sentimental viewers mostly in its latter half. Unnecessary violence aside, “My Policeman” does a good job of putting the final nail in the coffin of the “fridging your gays” trope (and good riddance!), while also ensuring that Marion, who has wasted the prime of her life serving as a shield for Tom’s sexuality, does not have her problems and regrets shoved aside simply because she is heterosexual. About three-quarters of the audience at the Chicago International Film Festival’s only screening of the film left in tears; the susurrus of my fellow viewers sniffling and crying softly was so loud it almost became unwelcome background noise as “My Policeman” drew to a close. And while the cold-hearted critic in me also wants to condemn the film’s ending for being all too twee and predictable, it’s clear that the vast majority of the crowd I was with actually loved it. Perhaps that’s all that’s really important. I can at least confidently say that “My Policeman” is a certified crowd-pleaser, and does have its moments … if you can ignore all the dead weight dragging it down.

Nestor Kok (MFA VCD 2022, alumnus) is a graphic designer by day and a film critic by night. He dreams of one day being awarded the title of America’s Best Mullet.

Loving the Monster: The Perfect Humans and “The Imperfects”...