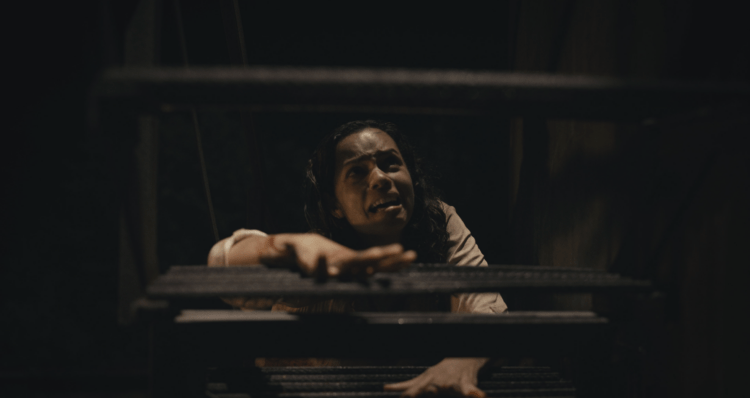 Great modern horror movies manage to invoke a lot more than just simple frights. Sometimes, they’re stark reminders of our base animal instincts, targeting our most primal fears, like the psychosexual terrors of 2014’s “It Follows.” Sometimes, they’re about societal ailments, like anti-Blackness in 2017’s “Get Out,” or misogyny in 2019’s “The Invisible Man.” Or, they’re about an individual’s trauma, like the trials of motherhood in 2014’s “The Babadook,” or the inescapability of grief in 2019’s “Midsommar.” Often, this kind of layering can lead to incisive and exciting movies, able to grapple with a difficult theme without relegating their characters to the sidelines.

But at the same time, exploring a topical theme can become a crutch for a horror film to lean on, as if simply grazing an issue makes it deeper. There’s 2021’s “Candyman,” that seems to want to say something about the commodification of race in the art world (it doesn’t). There’s Alex Garland’s “Men” from earlier this year, which is very sure it’s saying something profound about the patriarchy (it isn’t.) Or there’s 2013’s “The Purge” which somehow manages to take literal class warfare and take class out of the picture completely. When we look at the trends of horror in the 2010’s and onwards, it seems like the genre is facing a bit of a crisis; that in order for a modern horror movie to be good, meaningful, and worth your time, it has to explore a contemporary theme with a new perspective.

So when Tess, one of the three protagonists of “Barbarian,” saw the state of the dilapidated neighborhood of her Detroit Airbnb, I braced myself. And when Keith revealed he was the leader of an artist collective that lives out of Detroit in a neighborhood that is practically rent-free, I gripped the armrests tight. Then when AJ, the film’s last protagonist, railed against the sexual assault charge levied against him, that’s when I really started to sweat. It seemed like we were about to hit a lot of hot button issues, with only 90 minutes to spare.

But then the thing is, in “Barbarian,” none of that actually matters.

“Barbarian” is not trying to be a treatise on gentrification disguised as a horror flick, or a Johnny Depp allegory about #MeToo. It’s a horror movie with just enough brainpower to keep on trucking, carrying a lot more wackiness to keep us going. And it’s all the better for it.

At the start of the film, Tess, played by Georgina Campbell, checks into an Airbnb, only to find out that the place has been double booked. Keith, played by Bill Skarsgård, best known as Pennywise the Clown in the modern “It” movies, is the house’s other guest.

That’s all I’m going to give you. I wasn’t even sure if I should tell you about the most heinous AJ, played by Justin Long, but he’s already in the trailer.

I’m being so cagey because “Barbarian” is a movie driven by its twists. It’s not about its potentially topical themes or even really its characters. It is a movie that is propelled forward entirely by its narrative shifts that will have you reeling. There are several cuts in this movie that led to uproarious laughter in my cinema because of how brazen they were. Each time we thought we knew where the movie was going, it spun around away from us.

I say “we” because watching “Barbarian” is very much a communal experience. This is a movie that is worth seeing in a packed cinema or with a bunch of friends. It’s a movie where you are going to need to turn to the person next to you, to say “really?” “Did you see that?” “Can they do that?”Of its kind, it bears the most resemblance to last year’s gory crowd-pleaser, “Malignant.” It’s a horror film best enjoyed out loud, not necessarily to unpack its themes after it’s over, but instead to gape and gawk at in the company of others.

It’s for that same reason that I can’t quite say “Barbarian” is worth watching alone. Not because it’s so deeply frightening, which it isn’t. So much of the joy I had watching this movie was feeling a crowd receive it at the same time as me. The last time I had this much fun watching a horror movie was watching “Us” on opening night in 2019. Like “Us,” it’s a narratively clever movie. But where “Us” may have bitten off more than it could chew, “Barbarian” veers far away from any heady territory. Some could interpret this as the filmmaker’s laziness or, at worst, cowardice, eschewing from taking a stand on today’s pertinent issues. But I think it’s pretty clear how the filmmaker, writer-director, Zach Cregger, feels about the film’s issues. Where it took Alex Garland 100 minutes to get to in “Men,” Cregger gets to in about five lines. We don’t need to belabor the point. We know men are bad. So are we going to keep going on and on about that, or are we going to have a raucous good time? Cregger firmly opts for the latter, using the misogyny of the film’s characters for comedy rather than poignant (and over-trodden) social commentary.

We can’t as easily dismiss the film’s backdrop of Detroit and the accompanying specters of its police force and houselessness. And I don’t think Cregger does either. They are part of the film’s story, embedded into its plot without needing Cregger to step out from behind the camera to tell us that discriminatory policing is bad or that people should have access to housing. Those items are true, but rather than lingering on those points or going into more depth, Cregger finds more joy in investigating the literal darkness of his film’s setting. That joy is infectious with many of the film’s scares being as frightening as they are funny. Some viewers may find that type of thematic exploration shallow but that doesn’t detract from the minute-to-minute enjoyment of watching “Barbarian.” I found myself thoroughly satisfied with the film’s ankle-deep depth because of its imaginative premise and its delightful execution (in more ways than one). It has me excited for Cregger’s future work, as I welcome any horror filmmaker who can prove to detractors of the genre that horror can be smart without being intellectual, scary without dreadful, and very, very fun.