As it turns out, “Men” isn’t for everyone. 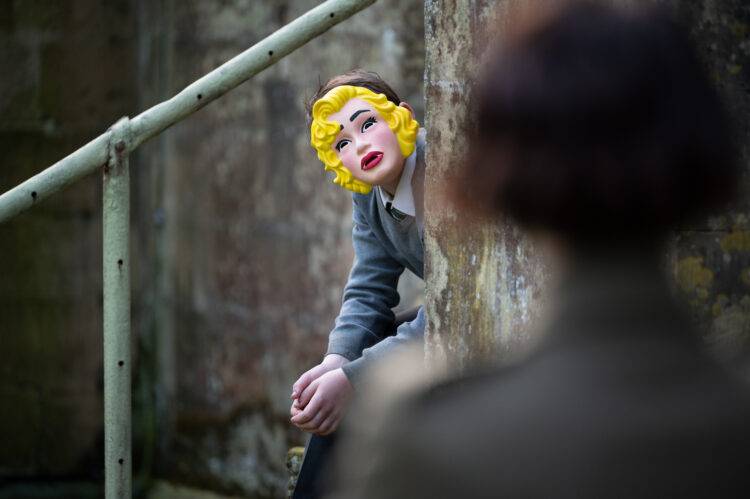 Photo still from “Men” provided by A24.

“Men” is such a weird movie that, during one of the film’s most disturbing shots, someone a few rows behind me took out their phone to take a flash photo and I wasn’t even mad. I respected them for it, for their brazenness, for their courage, for their knowledge that they would not be able to convince anyone in their lives that this was a real shot from a movie without pictorial evidence.

To say that “Men” pushes the boundaries would be an understatement. “Men” finds the tiniest slit in the boundary and slides through it, disappearing in the crevice to give birth to the bizarre. If you think I’m being too obvious here, then boy oh boy, you are not ready for what “Men” has in store for you.

Because despite its obtuse literal narrative, “Men” beats you over the head with its themes and imagery. There’s the Garden of Eden, the rib taken from Adam, Original Sin, the siren’s call, pregnancy, birth, rebirth, and rebirth yet again. And beyond that, there is yonic imagery abound. Yonic, a word that I had to look up knowing that whatever this movie was, it was definitively not phallic.

Though its imagery is direct, it’s not lazy. Alex Garland, writer and director of “Men,” is incredibly imaginative, almost disturbingly so. What was familiar becomes unsettling, whether it be the body, the trees, the face of a young schoolboy. No film has tapped so directly into my unconscious discomfort since the first time I saw Ridley Scott’s “Alien” when I was nine years old at a sleepover.

And that’s just one half of the movie. Because if I had to sum up “Men” with only one word (and I wasn’t allowed to say Men), the word would be “uncanny.” This movie is caught between the real and the unreal, situating the viewer and our protagonist, Jessie Buckler as Harper, in the spaces of overlap. There are the deeply unsettling visuals of surreality, of freakishness. But surrounding that is Harper’s very real experiences with misogyny.

Buckley’s Harper is shell-shocked with grief, determined to heal and recover in a country house, a rural retreat from her home in London. But Harper can’t escape the ever-present threat of maleness, embodied in multiple ways by Rory Kinnear, playing the titular Men. Kinnear’s performance, much to his credit, is not limited by his “function” within the narrative. Yes, every character he plays is a symbol of some form of misogyny, be it micro or macro. But behind those characters seem to be full worlds, not empty archetypes. Kinnear finds the humanity, as much as there is to be found, in these characters, never making them feel like mere functions or envoys for a message from Garland.

If anything, these characters are more horrifying than most of the film’s more conventional horror elements. Because with the unreal, Garland deliberately defuses the supernatural. Though they’re eerie and disconcerting, they also feel distant. They’re far away from us, unlike the tenseness between Harper and any of Kinnear’s counterparts. These moments feel more dangerous than anything else in the movie, which is saying something considering its levels of supernatural violence.

Which raises the question: Who is this movie for? Let’s assume that’s a valid question. That for a movie to be made, it has to be for someone. That is an intense fallacy, that misunderstands the purpose of art, and also would stop us from getting all sorts of delightful weird cascades like “The Green Knight,” or “Enemy,” or really, most of A24’s oeuvre. But let’s ignore that it’s a rubbish question, and instead try to answer it. Who is a movie that is dreadfully accurate about misogyny and its replication for? Is it for people who experience misogyny, women who have to endure the realities of this movie daily? Or is it for people who don’t understand misogyny yet and need a naked man clad in leaves to make it clear?

As I said, this is a flawed hypothetical question. But it was something I couldn’t stop thinking about, as Harper crawled on the kitchen floor away from an intruder, supernatural or otherwise. And it’s something I am thinking while writing this review about how much I enjoyed the body horror, the tenseness, the performances in this weird, weird, weird movie, that I don’t think I would recommend to many of the women in my life.

Because though it’s ostensibly a movie about the female experience with misogyny, it is primarily a movie about men: their failings, their projected insecurities, and their privilege. It’s about generations of misogyny, passed down through tradition, unchallenged and unimpeded. It manifests with a touch on the thigh, an insistence on using Missus, instead of Miss, or just a simple leer. Because though the unreal is unsettling, it is the real that is deeply horrifying in “Men.” It’s a disturbing movie that seeps into your brain like the moss on the side of a tree.

Myle Yan Tay (MFAW 2023) cares a lot about movies and comic books. One day, maybe they will care about him.