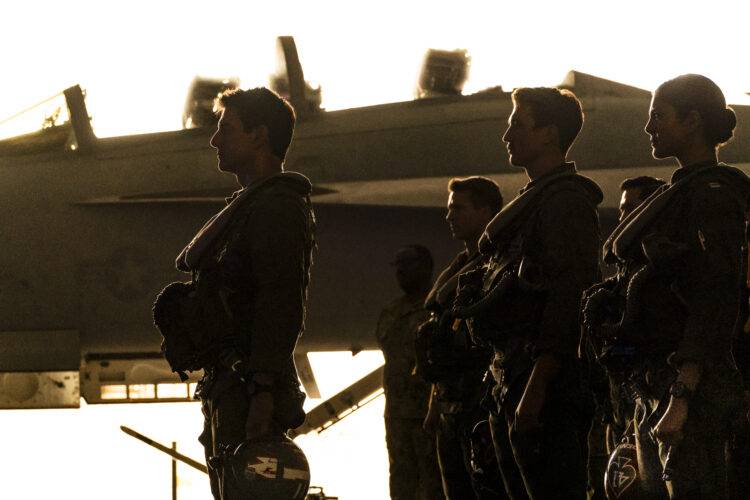 Why do we like renegades so much? What is it about the figure of the rebel that makes them so attractive in film? Why do we endear the rulebreaker, the revolutionary, the usurper, the maverick? Why is Tom Cruise almost always playing one?

The stretch before “Top Gun: Maverick” appeared was the longest we, as a film-watching community, have gone without seeing a Tom Cruise movie in cinemas since he started acting in 1981, when he was 19. If you’re doing the math, that makes him a fresh-faced 59 in “Top Gun: Maverick.” And after doing this for 40 years, Tom Cruise, for the first time onscreen, isn’t fighting his age. In fact, it’s essential to the film’s themes, as a sequel to a movie more than 30 years old.

We’re in a different century than the first “Top Gun,” so the old has to fight the new. There’s the cursory mention of the impending automated fighter planes at the beginning, quickly dropped much like Ed Harris’ entire character. There’s almost every character referring to Maverick as a “relic,” “old man,” “old-timer.” And then there is the wave of new pilots and talent, here to take the baton from Maverick or Tom Cruise, if he’s willing to loosen his grip.

Tom Cruise is one of the last movie stars. That’s a fact. It’s not up for debate. Very few actors still have what Tom Cruise puts on display in this movie. It’s an easy watchability, it’s charisma, it’s elan. If we had to put a pin on it, it’s knowing that you’re watching Tom Cruise. That much can also be said about plenty of today’s mediocre actors, like Chris Pratt or the Rock, where their personality becomes the character.

But the real movie star fuses their persona with the role they’re playing, without swallowing or usurping it. In “Top Gun: Maverick,” there’s Pete “Maverick” Mitchell up there, an ageing pilot, an old dog who knows many tricks. Superimposed atop that is Tom Cruise, the ageing movie star — the star who at some point is going to have to stop doing this, who eventually will no longer hang off a cliffside, ascend a skyscraper, withstand 9 Gs in a fighter pilot for our enjoyment.

Those are the two journeys going on at once in “Top Gun: Maverick.” One is Maverick’s journey, learning to hand off the reins and relinquish control. And the other is Tom Cruise’s obstinate refusal to stop doing crazy shit. Because he’s a movie star, these two halves don’t contradict or fight for screentime — they mesh together, a blend of reality and fiction.

Flying alongside Cruise are the spry new pilots, Top Gun’s next wave of star pilots, like Miles Teller’s Rooster, Glen Campbell’s Hangman, and Monica Barbaro’s Phoenix. They get their callsigns and some outlines of individuality, with Rooster and Hangman getting the lion’s share.

But ultimately the movie isn’t about them. Some get arcs, some don’t. Most of them are decorative, seat-fillers adorning Maverick’s own journey. This includes Maverick’s old/new flame, Penny, played by Jennifer Connelly, perhaps the first time Cruise has had an age-appropriate co-star in a film.

No one on the periphery changes much. And really, it’s not something to mind. Because this isn’t an ensemble movie, despite its best attempts to pretend to be one. This is a movie about how Tom Cruise can do things that no one else can do.

At its surface, it may seem like “Top Gun: Maverick” is a piece of US military propaganda. It’s framed around its best pilots fighting an unknown enemy in a nondescript, contradictory location, harvesting unauthorized uranium. At its worst, you can read it as an expensive, well-shot recruitment ad for the US Navy. But that ignores most of the movie’s actual content, like the fact that the pilots are constantly reminded their technology is sub-par, the flagrant disobeyal of orders, and that almost every leader within the US military is presented as stodgy, backwards, and incapable of imagination.

Except for one person.

Because “Top Gun: Maverick” isn’t a movie about American exceptionalism. If anything, it’s a film about Tom Cruise exceptionalism. The American military pales in comparison to the prowess of Maverick and without him, this single rebellious individual, the entire mission is a flop. Even when the full might of the American military is put on display, when Maverick watches the water from the lower decks of the aircraft carrier, he is the one in focus. When the planes are lowered, their metallic silhouettes covering the horizon, they’re not the ones in control. Maverick is. Maverick is the pilot, and without him, it all falls apart.

It may be tempting to think that this metaphor applies to the movie; that without Cruise, it is dead in the water. But that ignores the technical accomplishments of this film’s crew. The stunts on display here are gob-smacking. If this movie was forty minutes long and cut from flying sequence to dog fight to every shot of planes zooming along, it would already be worth the price of admission.

One of the most difficult tasks for any action movie is clarity. There’s the clarity of plot and character, most of them address that by being pretty simple to begin with. But what is much rarer is visual clarity. The viewer needs to know what’s going on. Because spectacle doesn’t make things better. Conflict, tension, character does.

Any day of the week I would rather watch Tom Cruise and Henry Cavill duke it out in the toilet of a French nightclub than any sequence in the “Transformers” franchise. The toilet scene shows character: they move differently because they have different ambitions, they hit differently because they come from different backgrounds. The “Transformers” scenes show metal scraping against metal with rolling turbines and pipes.

“Top Gun: Maverick” brings that same Cruise clarity to the plane sequences, something I found lacking in its predecessor. I was left behind by the jet streams of the 1986 original, unclear on who was where or what was going on. “Top Gun: Maverick” brings you into the sky, making every plane, every pilot, every conflict imminently clear without losing an ounce of spectacle. There are heart-racing moments within this movie, which essentially consist of Tom Cruise pushing forward a throttle. And it works.

I’ve never understood the appeal of an airshow, until watching this movie. And I doubt any trick at an airshow would excite me either. Because beyond the tricks, there’s the artistry. The elegant cinematography showing the solitude of flying solo, the incomparable partnership between pilot and wingman, the seamless coordination between a team of the best.

That’s the fantasy of Cruise’s Maverick: he is the hero without hubris. Because hubris means he is overly confident —  it’s impossible for Maverick to be too confident. There is no downfall to his pride because he understands himself perfectly. He is the best. He is without weakness. He is the Icarus that touches the sun. It’s the rest of the world that is wrong for thinking he can do any less. It’s the American military that doesn’t understand his exceptionalism, until he shows it to them firsthand. It’s the audience who doesn’t understand that Tom Cruise can do anything. But he’ll prove them wrong. Both Maverick and Cruise, co-pilots in a single-seat fighter jet, soaring by at supersonic speed.

A Love Letter to “The Forbidden Love EP”