A Love Letter to One Direction

Priyanka Kumar reflects on what made One Direction beautiful to millions of fans across the globe during the British boy band’s heyday.

By Priyanka Kumar May 11, 2022 Entertainment, Featured 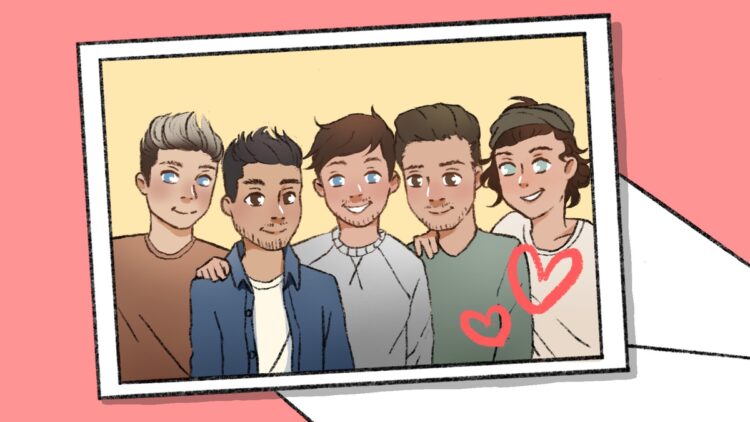 Call it fate or call it coincidence — on July 23, 2012, my sixteen-year-old self wrote a letter to One Direction. It was 1771 words and 3 pages long. To preemptively answer some questions: no, I never got it to them; yes, I tried (just the one time — I think I had an incorrect address down); no, I have no desire to try to send it again. I find myself more interested in writing them a new one.

It’s been ten years since One Direction first came into my life, and five-and-a-half years since they went on indefinite hiatus (read: disbanded). While I’ve moved on from their music, and don’t necessarily listen to it everyday like I once used to, they still hold an incredibly special place in my heart because, for a particularly difficult period of my life, they were the only stable source of comfort I had.

I was late to the One Direction party. Harry, Niall, Zayn, Liam and Louis started sweeping people off their feet in 2010 with their X Factor debut. Their start was an unexpected one. All five boys auditioned to be solo artists — in fact, it was Liam’s second time auditioning — and all five of them got rejected. However, Simon Cowell — a savvy businessman if nothing else —  realized that the five of them together had potential as a boy band. The rest is “History.”

It’s well known that One Direction was highly successful. The band sold out stadiums, broke multiple Guinness records, and as of 2020, sold over 70,000,000 records worldwide. But none of those reasons are why I fell in love with them. Don’t get me wrong, skill is always sexy. But as an insecure teenager, the biggest reason I fell so hard for these five boys is because they were tailored to make someone like me feel special and important. And they did.

For better or for worse, “What Makes You Beautiful” really did make me feel beautiful. “Another World” had me dancing up and down the concrete pathways of my high school campus. “Little Things” made me cry. “Best Song Ever” made me laugh. I woke up at 4:30 in the morning to catch the “Live While We’re Young” music video premiere, because suddenly, I had become a part of something that transcended my small world. I knew that even if I never met One Direction or saw them perform live, for those 3 minutes and 17 seconds, I was in harmony with millions of other fans who all were united by our love for five boys from the UK.

One Direction reminded me of what it was to love. It sounds cheesy and dramatic, but it’s true. As much as that letter from 2012 makes my 26-year-old self cringe, it also reminds me of what a real difference they made to my life back then. In the words of my younger self, “I thought loving a band, even if it was just for their music, was a sign of vulnerability. I didn’t like being vulnerable. You changed that. And… I owe so much to you.”

I suppose then, it should be no surprise that after all this, when my mom fell sick and passed away in Nov 2015, call it fate, call it coincidence, call it whatever you want, it was “Made in the A.M.” that got me through that loss.

To this day, boy bands get a lot of flack for having their largest fan base be “a bunch of teenage girls.” Obvious sexism aside — the same kind that makes romance novels, or anything that centers the femme/female gaze a “guilty pleasure,” it downplays the reality of the power that boy bands have to reach those of us whose wants and desires are rarely centered in mainstream narratives. Their ability to make me, and so many others I know, feel seen and listened to is real. The joy, fulfillment and comfort they bring is real. Their impact is real.

It was real when I was sixteen and it is real today, although now with a different source. If we ever meet in-person, often the first bit of information that I will offer about myself is that I love BTS. What I don’t offer is that the comfort I draw from them is strikingly similar to the kind I once drew from One Direction. And I’m not the only one.

I started listening to BTS during the pandemic. I attended their online concert MOTS ON:E and felt the same kind of camaraderie with the other 900,000+ ARMYs who attended. And, most intimately, when faced with particular difficulty in my personal life — the failing health of family members, added responsibilities I did not feel ready for, the pressures of grad school — it was BTS’ music that I leaned on.

Thinking back to my One Direction days, and having the (attempted) self-awareness I do now, I wonder if the female gaze is what it comes down to. One Direction arguably marked the start of the internet boyfriend phenomenon — the men who are there for you when others break your heart, the ones who are “written by women.”

Today, when I love BTS it is for their music, their work ethic, their passion, their dedication, but it is also for their image that is so carefully crafted to be attractive by women’s standards and preferences. One Direction was similar — it’s definitely worth noting that a large majority of the songs in “Up All Night,” are all about a girl being everything they want. When One Direction was a force to be reckoned with, what the market deemed the female gaze was different to what it is understood to be today, and their label made damn sure these five boys reflected that as much as possible. They were goofy, flirty, playful, and above all sang about loving women quite consistently.

One Direction’s music feels less meaningful to me today compared to BTS’ lyrics and songs, which feel contemporary, relevant and present as a snapshot of our current world. But even though I often say my love for 1D ran so that my love for BTS can now shoot for the stars, I’m not sure they’re as different as I like to tell myself. My intellectual reasons are worlds apart, but for a large part my emotional ones are much the same.

Music is powerful, and One Direction takes me back far too easily to times and versions of myself I’d rather move strongly on from. But maybe one day — in a few weeks, months, or years — one day I’ll willingly go back to “Up All Night,” and listen to that entire album from start to finish, remembering the girl that fell in love with five silly boys in one wonderful band from a country 4989 miles away from hers.

Entertainment, Featured A Love Letter to One Direction
« Previous Story

Maybe The Real “Elden Ring” Was The Friends We...