The Life and Death of a God Complex: Kanye West, Invasive Media, and Mental Health

Casey Wheeler untangles the history of Kanye West’s struggles with mental illness, and the messy role that the media played in it all. 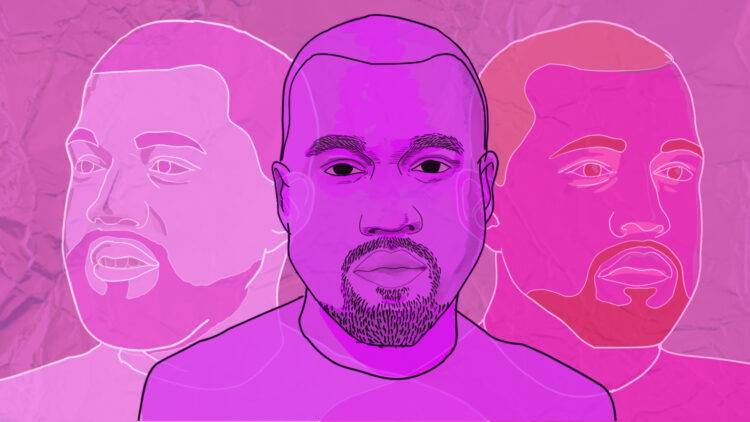 Love him or hate him, Kanye West’s influence and fame in the rap industry and on pop culture has been undeniable since his entry onto the scene in 2004. While he initially gained fame for his musical genius and innovation, he is perhaps better known for his seemingly never ending public relations nightmares, beginning with his 2009 incident with Taylor Swift at the VMAs. The path to the mire of controversy that Mr. West constantly finds himself in has been a gradual, and traceable, course of media abuse, misconstrued mental illness, and personal tragedy, following him  throughout his career. And then there is, of course, the controversial and often problematic central figure of Kanye West himself.

West has never strayed from being bold in his career, and with that boldness comes a penchant for controversy. In “Gone,” a song from his 2005 album “Late Registration,” he raps, “They claim you never know what you got ’til it’s gone / I know I got it / I don’t know what y’all on.” He has carried that same energy through his career, and similarly through all his controversies. Kanye’s career has always been buoyed up by three major factors — his unshakable confidence, his Christian faith, and his mental illness. This has come with a myriad of pros and cons. In 2005, Kanye stated, on live television, “George Bush doesn’t care about black people.” This quote would prove an early example of the divisive nature of his public persona – while he seems aware of social issues, or at least was early in his career, he also is honest to a fault, and can’t resist speaking from the heart.

Kanye seemed capable of maintaining a balance between these three factors in his career, but all that changed in 2007 with the death of his mother, Donda West, and shortly after, his split from long-term fiancée Alexis Phifer. With these traumatic events came dramatic shifts in his career and life, and accordingly, the media’s perception of Kanye West. As his music grew more unique and innovative, his public relations grew more controversial, until he was practically driven into isolation after taking the microphone from Taylor Swift during her speech at the 2009 VMAs. It should be unsurprising that today, Kanye has become a controversial figure. For all his earnestness and passion in his art and music, his social persona was proving too divisive to justify.

However, when West was diagnosed with a bipolar disorder in 2016, a re-examining of his career became necessary. According to the DSM-5, bipolar disorders are a “group of brain disorders that cause extreme fluctuation in a person’s mood, energy, and ability to function.” Throughout his discography, his art reflects his mental state, and the sincerity and honesty of his work during his episodes is awe-inspiring. It also allows listeners new insight into his actions throughout his controversial career.

Revisiting 2009 with this perspective, it’s clear that Kanye experienced many triggering situations for his mental health around this time, and the media coverage that came with this didn’t help. While his mental illness does not excuse his actions, it does explain them, and I believe it’s possible to understand and empathize with where he’s coming from without moralizing his actions. During this year, following the VMAs, he left for Japan to avoid the PR hell that followed, and during this time he created what is perhaps one of the most haunting creations of his career — the album most Kanye fans call his magnum opus, “My Beautiful Dark Twisted Fantasy.”

Merely an unfinished track of disconnected rhymes and stream of consciousness over an edited sample, “Never See Me Again” is a Kanye track in its earliest form, and feels like an honest view into its creator’s mind. Leaked in 2010, about two months before “My Beautiful Dark Twisted Fantasy” was released, West uses the song to reflect on suicidal intent and meditates on heavy issues of mental health in his fragmented verses., But perhaps more notable is the music utilized — “Fukari Dake no CEREMONY” by Yukiko Okada, a Japanese artist who committed suicide at a similar age to West. At the end of the song, he asks an empty audience to “clap your hands” and is met with silence — a striking reflection of his state at the time.

“Never See Me Again”  provides the foundation for radical recontextualization of Kanye’s life during this time. However, while he does indeed suffer from constant media abuse, the fact is undeniable that he does feed back into it. This clearly stems from patterns of learned behavior, and I believe it’s a difficult cycle to break. What with the late diagnosis of his disorder, Kanye himself does not possess the terminology and knowledge to fully verbalize his own experiences. Additionally, the encounters he has had with mental healthcare and treatment have been negative and traumatic. He described his experience in an interview with David Letterman, saying, “You feel everyone wants to kill you, you pretty much don’t trust anyone, and they have this moment where they handcuff you, they drug you, they put you on the bed, and they separate you from everyone you know… that’s something that I’m so happy I experienced myself so I can start by changing that moment. When you are in that state, you have to have someone you trust. It is cruel and primitive to do that.”

This new era of self understanding and mental healthcare has, of course, led to Kanye continuing his typical pattern of behavior by sharing his experience with unbridled honesty. n interviews and writing, Kanye is not afraid to divulge his opinions on mental health, systematic oppression, and his own internal conflicting feelings — but his lack of tact and subtlety in handling complex issues remains intact from years past On the cover of his album “Ye,” West writes, “I hate being bipolar. It’s awesome.” This is not a contradiction, but an unflinching reflection of his reality living with this disorder. He views it as a health condition deserving of the same empathy as any physical ailment (https://people.com/music/kanye-west-spr), and frequently credits his struggle for allowing him to create better art, as he states on his song “Yikes” from “Ye” — “That’s my bipolar shit, ***** what? / That’s my superpower, ***** ain’t no disability / I’m a superhero! I’m a superhero!”

It is also important to note there exists both a stigma towards Black Americans with mental illnesses within culture at large and a stigma towards mental illness within the Black community itself, and Kanye is not free from either of these paradigms and cultural contexts. In her book “I’m Telling the Truth but I’m Lying,” Bassey Ikoi writes about her experience as a Black person with bipolar disorder, and makes strong connections between her experience and West’s. She writes, “We only care about mental health when we like the person who’s experiencing it,” and argues for a more empathetic view of West. As perhaps the most visible celebrity with bipolar disorder, a more nuanced and empathetic treatment of him is paramount. Simultaneously, it is not the man’s responsibility to provide a perfect example of how to behave while mentally ill, nor is it possible to expect him to. While West may not be perfect, it can’t be denied that he has never been anything but wholly honest, for better or for worse.

We can enjoy Kanye’s work for the art that it is while applying a critical and complex lens when trying to understand his experience. Contextualization allows for a more clear understanding of his work and life, and as fans it is not our job to moralize his actions or pass judgment. We can derive artistic and creative meaning and fulfillment from his work and appreciate it without wholly supporting or dismissing the man, and his mental health is a private matter. The convergence of media coverage with Kanye’s life has directly contributed to a snowball effect on his mental health, and seems to be an inescapable cycle by this point. This cycle is, of course, partly on him to break — but as consumers of pop culture, we must also take it upon ourselves to avoid further demonizing West and furthering this abusive routine, and to consider the full context when judging the situation.