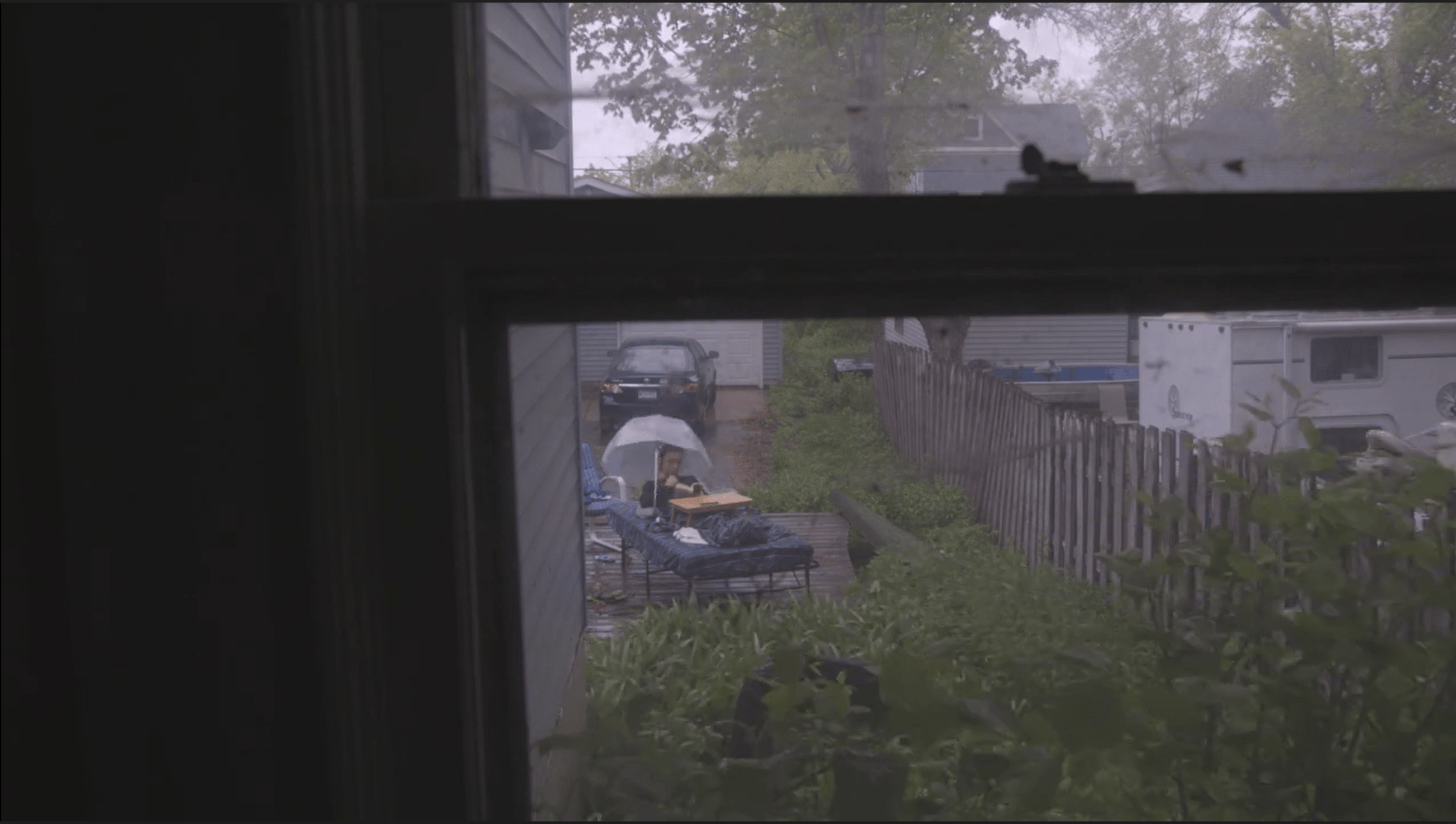 A still from Jonas Sun’s “The Old Pond”

Even if a person cups his hands over his ears, he still hears. He still feels the vibrations, as Jonas Sun (MFA 2022) pointed out during a recent Zoom call.

Born in Beijing, an English teacher named the young Sun “George” in grade school. For reasons long lost among the wrinkles of childhood, Sun regarded “George” as too “bookish.” Upon arrival in the States for an undergraduate degree, Sun shed the name for a more pleasing chime of syllables: Jonas.

Sun meditated on his name in a short undergraduate film called “Sun Yi Nuo.” Over a video of a dreary autumn pond, Sun recalled in monotone a question one of his good friends asked him, “Will Jonas still exist if you leave here?” Sun shrugged the question away, dismissing names as convenient and ultimately unimportant labels. “I didn’t even try to remember Yi Nuo.”

An indifferent breeze rasped into the microphone during a sustained shot of a bridge arced gracefully over a pond. But for the bare branches and slate sky, the scene was picturesque, if not contrived. Indeed, this view, with full foliage, provided the background of the college-issued ID cards, one of which flattened Sun’s name into “Yinuo Sun.”

The photo on the ID card in “Sun Yi Nuo” showed none of the glossy, long hair Sun pulled into a low ponytail for our Zoom call. When I asked him about the film, Sun chuckled at himself. Perhaps a bit bashfully, Sun noted that he had a lot to say back then. Indeed, Sun’s recent films have leaned away from narrated musings in favor of layers of mundanity as the loam for epiphany. In “Preparation,” Sun stitched together dozens of videos shot each morning for half a year from a camera affixed to his bedroom ceiling. The content? Vacuuming. The recording ritualized the chore, of which the audience was not spared the incessant whine of the machine. A mosaic of Sun’s faces confronted the viewer at the end of “Preparation,” rattling the audience’s sense of voyeurism.

“Sun Yi Nuo” concludes with a body dropping from the bridge, then splashing into the pond. Printed on-screen, a haiku – “The old pond/ A frog jumps in/ The sound of water” – imparted no sense of certainty about what took place in the distant background. “You cannot ever be sure that the frog jumps,” Sun said to me, “only the instantaneous splash, then ripples, then the pond returns.”

As in “Sun Yi Nuo” and “Preparation,” the extent of the performance in “The Old Pond” was surprising. In “The Old Pond,” the camera watches from the shelter of an interior window pane as Sun drags his bed outside in a rainstorm. He reads, lays down, bundles up, and, under the lashing rain, finally gives up before he catches a cold, or as Sun put it in the video, gives himself “diarrhea again.”

Sun’s easy humor is consistent, though he cited an artistic perspective that is ever changing. On our video call, he pulled out his latest project, a 2008-era ballroom dancing aid that resembled a curtain rod that has been warped around a refrigerator. As a consumer product, the object, when draped around one’s shoulders, was meant to impart a sense of rigidity to a dancer’s frame. “If you wiggle all around, you only feel your own instability,” Sun, a veteran ballroom dancer, explained. Because the tool inhibited muscle development by promoting lazy, slack arms, no one used it as intended. So Sun uses it as unintended, with plans to affix honeysuckle pod antennae for a performance in which the body’s movements generate the sound.

When asked about the thematic direction toward which his work was headed, Sun exhaled and said it’s “an honest question which I don’t have an answer to,” but he doubted that “anyone who has an answer will have it for more than a minute.” To Sun, living is art. “Where I’m heading is tomorrow.”

Jonas Sun is on Instagram @jonas_chugs. He will be showing work and performing at the IMPACT show on March 5 and 6 at 33 E. Washington St.