Taylor Swift has long since been serially maligned by the press and misogynist critics. Re-recording her albums is set to change that. 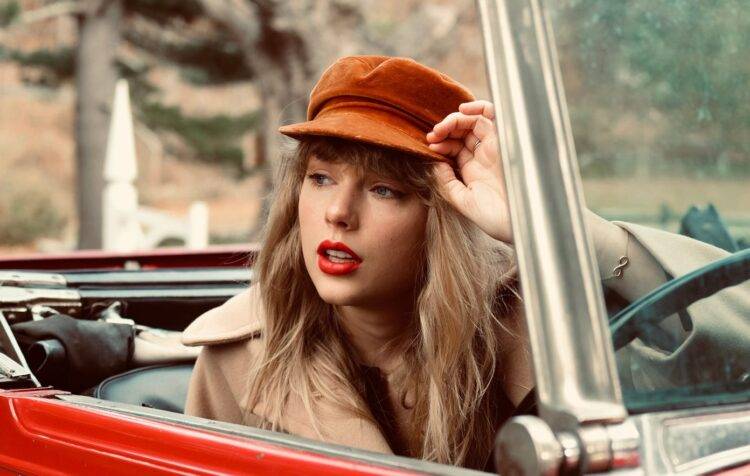 It’s likely that the mention of Taylor Swift conjures up a specific time of your life. Many will remember guitar ballads drenched in shimmery silver and blue, a Tennessee singer emerging on the country scene (2006). Some recall the various haircuts and styles popping up through photographic memory: curls frozen in golden aperture (Fearless, 2008), the straightened, blunt bangs setting the scene for the 2010’s, and the dramatic bob cut aiding a transition of both personal and musical style. For me, Taylor’s name draws up the following: The Victoria’s Secret Fashion Show, winter 2014. Taylor strides across the stage in a negligee robe, its train of rosy satin enhancing her regal presence as she emotes “Blank Space.” For almost everyone, this time symbolized Swift evolving from a young girl playing the role the public wanted, to the woman that began to own herself, and who she truly was.

After the viral announcement that Scooter Braun’s Ithaca Holdings bought Scott Borchetta’s Big Machine Label Group for $300 million dollars in the summer of 2019, Swift lost all ownership of her masters, therefore losing all ownership to her existing discography predating 2019. Once the news hit social media, waves of support towards Swift drew in from musicians, and fans all across the internet. Singer Tinashe, rapper Azealia Banks, and supermodel and close friend of Taylor, Gigi Hadid are just a few among the millions that backed Swift when the story had just developed.

It came as a shock to everyone, but in an interview with CBS Sunday Morning, Swift only half-saw it coming. “I knew he would sell my music. I knew he would do that. I couldn’t believe who he sold it to, because we’ve had endless conversations about Scooter Braun, and he has 300 million reasons to conveniently forget those conversations.”

Shortly after that interview, Taylor announced on Good Morning America in August 2019 that she would be rerecording her albums starting November 2020, in order to regain creative control over her past work. A year later, Taylor’s catalog had once again been bought without her knowledge. Shamrock Holdings, a private equity firm, had purchased Swift’s masters. In a letter to Swift from the firm, it had been disclosed that under their terms, Braun would still profit from the years worth of Taylor’s existing music, videos, and album artwork. Disheartened, Taylor wrote in an open letter posted on Twitter, “I was hopeful and open to the possibility of a partnership with Shamrock, but Scooter’s participation is a non-starter for me.” Following her polite rejection, she continued to write that her rerecording process was still on the table and in motion.

The first album to be rerecorded and released was “Fearless (Taylor’s Version)” in early April 2021, and “Red (Taylor’s Version)” was released a few months later in November. Among the re-recorded songs, every album comes with additional “From the Vault” tracks written for a particular album but didn’t make the final cut.

During the release of “Red (Taylor’s Version)”, Swift’s directorial debut, “All Too Well: The Short Film” starring Sadie Sink (“Stranger Things,” “Fear Street”) and Dylan O’Brien (“Teen Wolf,” “The Maze Runner”) and the speculation of what or who — cough cough, Jake Gyllenhaal — it could be about made waves across the internet. Three days after, the music video for “I Bet You Think About Me,” an originally scrapped, now “From the Vault” track, was posted. Directed by Blake Lively, the video follows Swift subtly destroying an old lover’s wedding. Though the song and video are under the release of Taylor’s “Red,” the video’s narrative could be a vengeful spin of “Speak Now,” the title track for Swift’s third album yet to be released as her version. For those well-versed in Swift’s unending rabbit hole of clues and references to the universe of her discography, it’s safe to assume that “Speak Now (Taylor’s Version)” could be next in line.

Though the chronological order of the albums’ new release dates are unknown, all albums predating 2017 are eligible to be rerecorded, but Swift will not be able to re-record her sixth album, “Reputation,” until November 2022. Legally, Swift would have to wait five years after the original release of the album to even begin recording. Therefore, a possible re-recorded edition of “Reputation” may not materialize until 2023.

While the timeline of both Swifties and the public coming to her defense predates this occurrence, many fans are applauding her on this form of self-defense. “I was obviously super excited when she announced her re-recording. The more I learned about why the more and more I loved Taylor,” says Eli Clayton (BFA 2025). “I think that her doing this really sent a message to the entire music industry and a lot of artists. It sparked a conversation about artists owning their own music and how the industry can be very cold and manipulative. I think the re-recordings are amazing and they are pushing the music industry in the right way!”

Since the release of both “Fearless (Taylor’s Version)” and “Red (Taylor’s Version)”, her streams on Spotify have increased significantly. On the day of “Red (Taylor’s Version)”, the album was streamed 90.8 million times on its first day, breaking her own record of first day streams by a female artist in history with “Folklore”, which was streamed 80.6 million times on its first day. Fans suspect that a secret album fittingly titled “Karma” (that has been shelved since the summer of 2016) is Taylor’s next original album. If the album’s recording fits within the rumored timeline, it’s possible that the release could steer Taylor back into the pop genre, as her last two original albums, “Folklore” and “Evermore”, introduced us to Taylor’s alternative style of music.

One of the most polarizing figures in pop culture history, the mere mention of her name spurs either tremendous love or venom. Taylor’s name has been countlessly thrown into social media ridicule, tabloids, and gossip columns craving the next possible scandal her name is tied to. From the early days of her career, she became known as “America’s Sweetheart,” fulfilling a wholesome identity and a relatively unproblematic past. Having started a career so young, it was hard for many people to take her seriously or believe in her ability to understand her industry. Being perceived as a naive teenage girl playing dress up, she was painted as “whiny” or “boy-crazy.” Looking through the timeline of Swift’s ever-evolving image, it’s easy to see that she took these criticisms to heart and adapted herself accordingly, distancing herself from the woman that was hated by the press and fellow industry moguls and artists.

Serially maligned by men in the industry, Swift learned how to fluctuate how she presents herself in her music while maintaining her own authenticity. Over time, she transitioned from that Americana dream girl who did what everyone wanted, to a woman who defied what people thought of her and did what she wanted – the best kind of self defense. Taylor rerecording her albums adds to this roster of rejecting those working against her, refusing to let any of her hard work or power be ripped from her. No matter the consequence, conflict, or public disapproval that Swift is met with, she has proven one thing to be true time and time again: She is a woman who defines herself, and whether you like it or not, she’s here to stay.

Ghosts in the Machine: Examining the Origins of Analog...