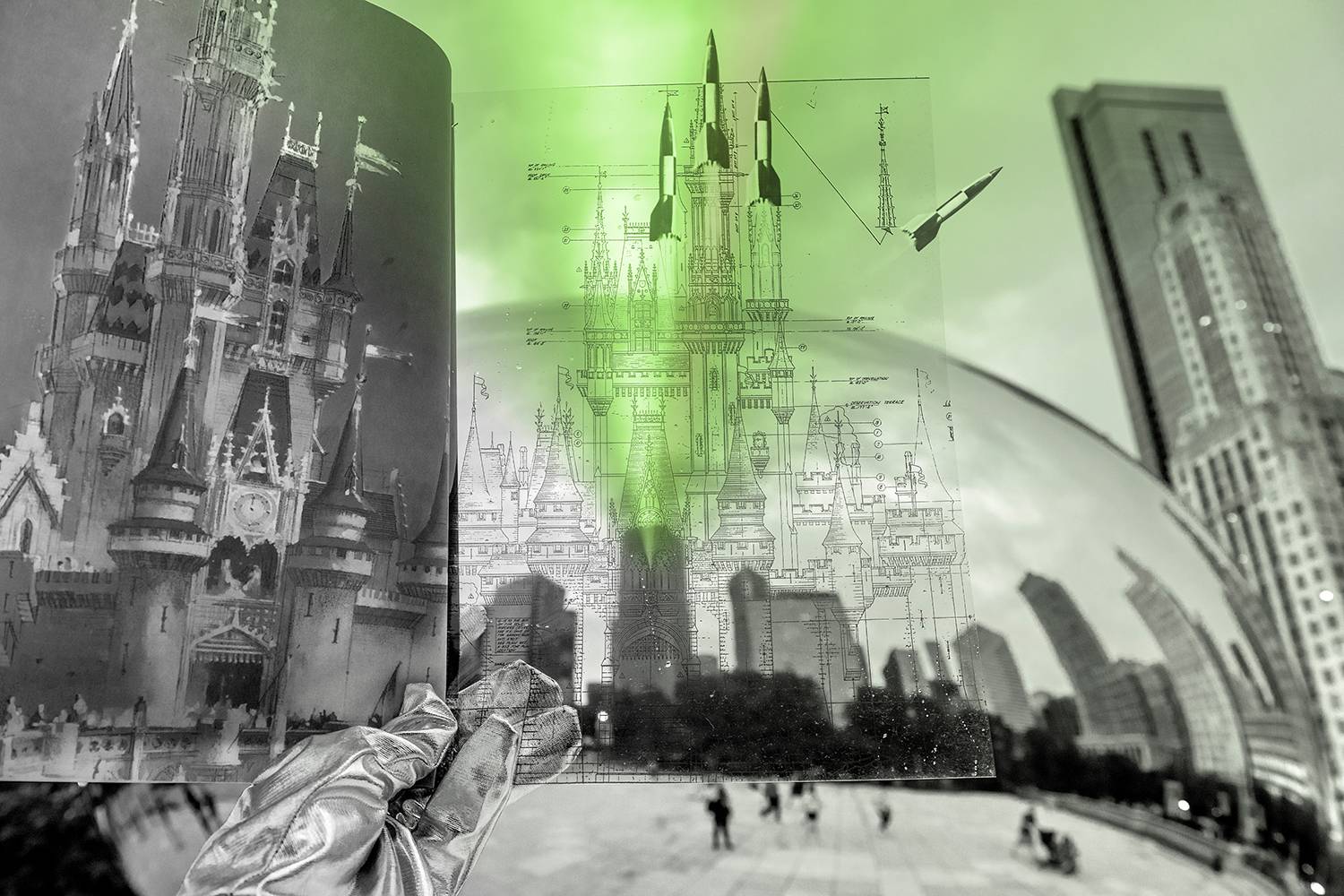 Eyes framed by blue, pink, and green shadow and sporting a NASA flight suit, M_m<M sang into a voice changer about the would-be first Black astronaut, Ed Dwight, who was used in NASA press releases, but never made it into space. “He was chosen then he wasn’t chosen” M_m<M told me over email, “this history is both untold and (intentionally) blurry.”

The murmuring vocals morphed into the melody the Little Mermaid sings when Ariel’s voice is stolen by Ursala. This occured in front of a film showing M_m<M’s training to be a performative mermaid in Miami for which there is apparently a large demand at luxury hotels.

M_m<M’s performances maintain an educational angle. “Collaborative alliances” and “ideation” that leave out many types of people are the shared failure of NASA and Disney. According to M_m<M, each replaces “the concept of future dreams with fables and imagery,” like The Little Mermaid, which is “one of the worst narratives for women’s rights.” In their research M_m<M found that both NASA and Disney have roots in Nazism. The unwillingness of Disney and NASA to declassify these rotten histories propels M_m<M to “work to reveal the racism, sexism, homophobia, and social inequities of AMERICAN DREAMS.”

After “divorcing” from NASA, M_m<M came to Chicago to attend SAIC. Performance radiates from M_m<M’s practice. Their past projects have involved donning a green chroma key suit to logroll on the dunes of the White Sands National Park and Missile Range while clutching a tumbleweed.

After their performance at the CCC, M_m<M lingered to document other artists performing for the Red Rover Series, a week-long showcase that’s part of the exhibit, “Successful Failures.” The artist following M_m<M wanted to dim the lights, and M_m<M helpfully pointed out that the light switches were underneath the sign that said “Please Do Not Adjust the Lights.”

After the lights went down, M_m<M said that they’re told “No” a lot in their performances. For example, in their last month of graduate school, they were slowly chased from the sculpture garden at the Art Institute. At the time, M_m<M was wearing a white space suit, and their child was due in two days.

M_m<M believes they have the same “neurodivergent wiring of all space nerds,” but the fans who make it into space are men. As a pan, queer, feminist, M_m<M makes noise on earth about the structures that dictate who makes it into space; their art makes transparent NASA’s “traceable secrets.”

M_m<M is currently Artist-in-Residence at Nightingale Cinema (Chicago). They will premiere “Sally Ride’s Hair” a “*live* non-linear film [IRL]” on Saturday January 8, 2022. Keep up with M_m<M on their website.