Quentin Tarantino’s newest piece of revisionist history film offers us a romp through 1969 Hollywood. But can we separate the art from its creator? 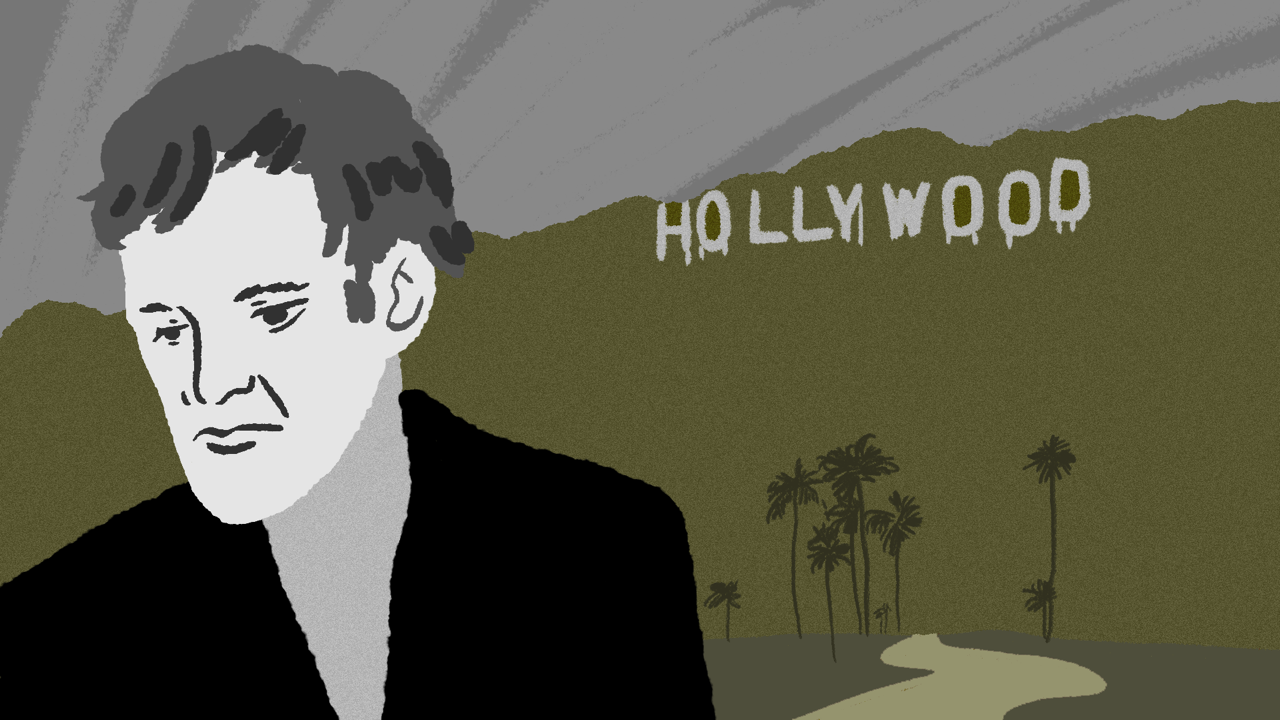 To use a millennial-friendly metaphor, “Once Upon a Time … in Hollywood,” Quentin Tarantino’s latest work of revisionist history, is more sandbox game than RPG. It trades on the splendor of its universe, not the momentum of its narrative. If you’ve ever dreamed of California in the 1960s, then the film’s fashion, flower-power pop, and smorgasbord of stars will be immediately seductive. In an early scene set at the Playboy Mansion, Steve McQueen (Damian Lewis) explains the Sharon Tate-Roman Polanski-Jay Sebring love triangle to a groovy passerby. Later, the camera salivates over resurrections (not CGI) of ’60s Sunset Boulevard’s burger dives, burrito shacks, and, of course, movie theaters. You, the viewer, are a fly on the wall. It’s homage; it’s caricature. All boogie.

If you know anything about Sharon Tate, you probably also know something about Charles Manson, which leads you to believe that the film’s narrative arc is going to culminate in Sharon Tate’s murder. Thus, Tate (portrayed by a resplendent Margot Robbie) is Innocence incarnate. The doomed angel of Hollywood, she gets a fair amount of screen time and relatively few lines. Robbie’s one and only duty, it seems, is to be Hollywood’s closest thing to a saint — an It Girl.

Saintly she is. People have criticized Tarantino for underutilizing Robbie, citing how little time she spends speaking. But to do so is to underestimate the nuance of Robbie’s performance. We’re certain that her story will end bloodily, and so we savor each of her spritely moments: dancing at the Mansion, giggling with a hitchhiker-cum-new-best-friend, going to a theater and watching her career take off. She exemplifies a star on the rise: exuberant, freewheeling, unsinkable. Robbie’s Tate may not be voluble, but, as they say, still waters run deep.

Both Manson and Polanski are onscreen for only about a minute and a half each. The story mostly has to do with Rick Dalton (Leonardo DiCaprio) and Cliff Booth (Brad Pitt). Rick, once-TV star and would-be leading man, needs to rescue himself from obscurity. Cliff, Rick’s longtime, beat-up stunt double, has skin in the game too. In Tarantino’s Hollywood, where real human beings refer to each other by their characters’ names, Cliff is Rick’s sidekick, standing interestedly by while Rick wields a pistol like a real quick-draw king.

As if he were a real quick-draw king, that is. Life and the portrayal of life in “Once Upon a Time … in Hollywood” are inseparable. There’s a lot of faux-film footage — real DiCaprio acting as fictional Rick acting as fictional cowboy Jake Cahill — and often, the line between playacting and interacting blurs. A blustery Bruce Lee (Mike Moh) holds forth between takes as if he were the ubermensch of his films. Rick has a heart-to-heart with an eight-year-old co-star, Trudi (Julia Butters), who insists that they stay in character. Behind the scenes, Tarantino says, there are just more scenes. All the world’s a stage.

Like “Django Unchained” and “Inglourious Basterds,” the film’s true antagonist is History, which always seems to get the story wrong. The good guy’s supposed to win, dammit. Slave plantations should have been napalmed, Hitler should have been machine-gunned to bits, and Sharon Tate should have made it out alive. No matter how cynical we are, this is how we wish the game would go, and it’s what Tarantino serves up.

Like several of his films — especially all since “Django Unchained” — “Once Upon a Time … in Hollywood” is a bit too slow and a bit too long. But neither of these infractions are as severe as they were in “The Hateful Eight,” Tarantino’s artistic nadir. The universe is thrilling enough that you want to stay with it. In a world with fewer and fewer cinematic events, “Once Upon a Time … in Hollywood” is well worth the price of admission.

On the spectrum of cancellation, Tarantino falls somewhere between his two-time star Brad Pitt and his ex-benefactor Harvey Weinstein. Pitt’s coolness is aging the way most coolness ages (except, it should be said, in Tarantino’s scripts). Weinstein, an ogre, should never be heard from again. Tarantino is — well, still kind of cool, but increasingly problematic.

His films have long made liberal use of the n-word, often coming from white characters’ mouths, a few times coming from his own mouth. He almost always finds ways to bludgeon or otherwise torture his female characters. He coerced a reluctant Uma Thurman into stuntdriving, and dismissed Roman Polanski’s affair with a 13-year-old as merely statutory rape. And, perhaps his longest-running character flaw, he’s a straight white male who loves to hear himself talk.

Like podcasters and documentarians before him, Tarantino’s films indulge our perverse fascination with the horsemen of the apocalypse — most recently, Charles Manson. In recent years, as more holes have been poked in straight white male hegemony, the most urgent art is that with social preoccupations. Tarantino is not a socially preoccupied director; he’s a builder of exquisite rollercoasters, and the apocalypse is one more thrilling spiral. From a progressive perspective, Tarantino is no longer a necessary voice.

But from a box office perspective, Tarantino is one of very few necessary voices. “Once Upon a Time … in Hollywood” scored one of his biggest opening weekends ever. Journalists may periodically decry his political offenses, but the general public is undeterred.

So what’s the verdict? I’m not nearly bold enough to say. If you’ll forgive the first-person interjection, I’m a straight white male too, and I hardly feel equipped to render that kind of judgment. The voices who deem Tarantino a cultural has-been are not wrong. Neither are the patrons who occupy his sold-out theaters wrong. Time will determine which side prevails. If reviews like this one continue to tip toward “political subject,” History, Tarantino’s punching bag, may well get the last laugh.

Like Entertainment Once Upon A Time… In Tarantinoland
« Previous Story