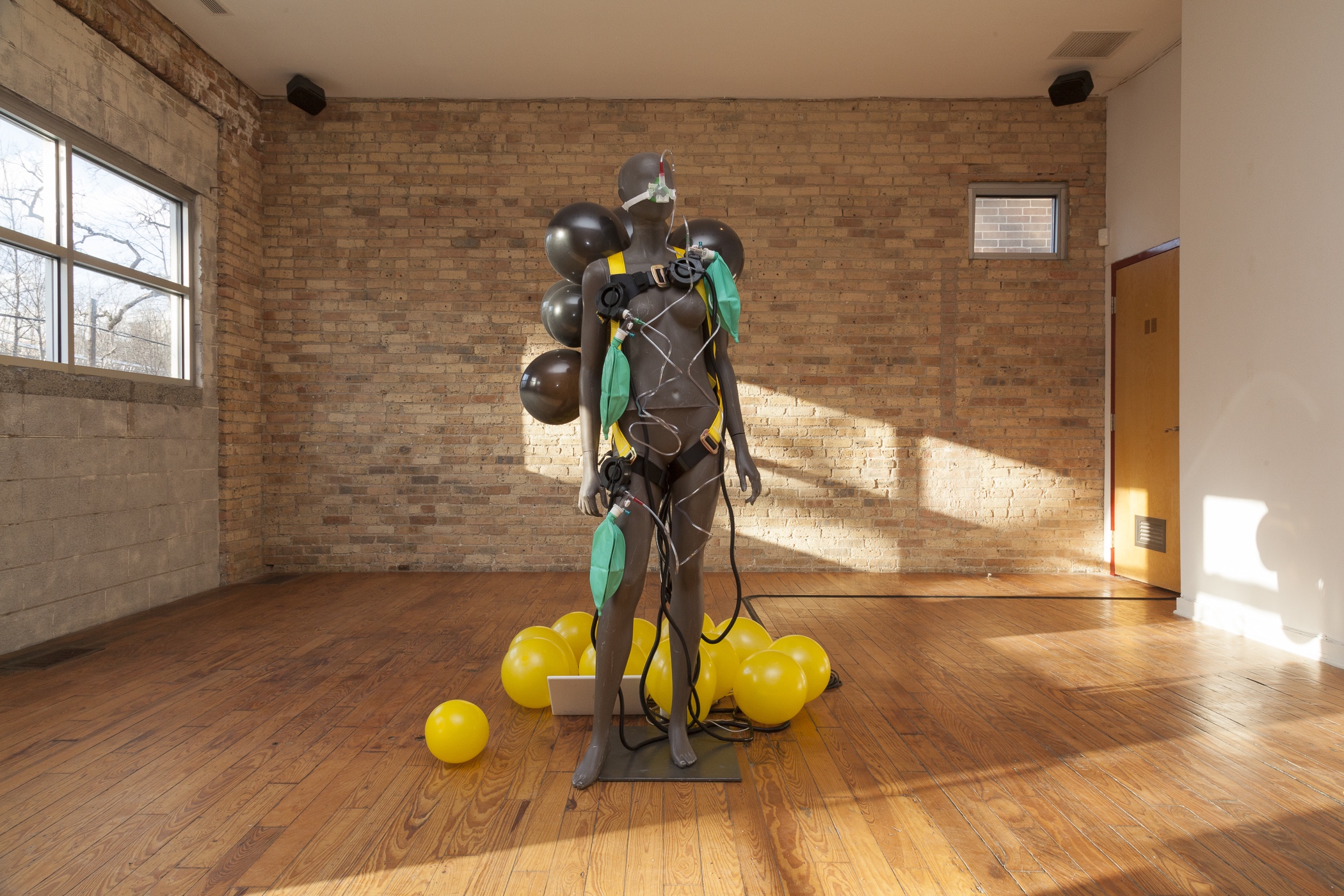 The title of Lee Blalock’s current show at the Experimental Sound Studio (ESS), “I Sing the Body Cybernetic,” is a nod to Walt Whitman’s poem “I Sing the Body Electric,” in which Whitman expresses his fascination with the spirituality of the human body. Blalock, an Assistant Professor in the Art and Technology Department at the School of the Art Institute of Chicago (SAIC), also centers their work around perception of the human body. Through live performance by electronically activated sculptures, this show probes the possibilities of body modification through technology, as well as the traditional definitions of what constitutes performance.

Once a month from February through April, a new iteration of this series is installed at ESS. Every iteration consists of a mannequin or set of mannequins outfitted in different wearable electronics and accompanied by an algorithmically generated sound piece. The sound and active parts of the wearable piece are both controlled through a max patch, so that one cannot happen without the other. The mannequins’ performances are meant to represent different genres of music, from post hardcore to art rock, but their physical forms also serve as canvasses for a future of posthuman possibilities, a future where robots could function autonomously as artists and creators. 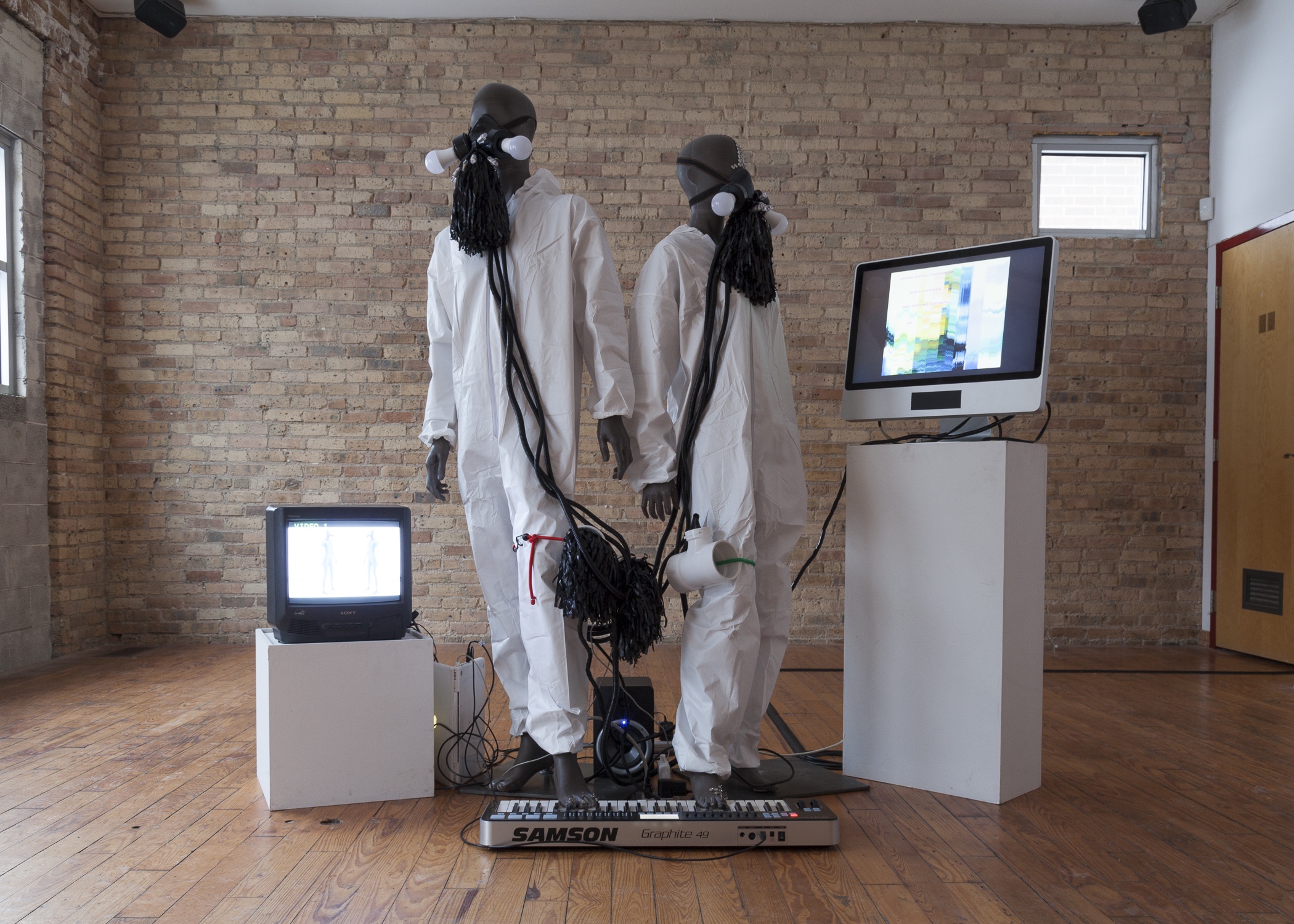 The second iteration of the work, a band called ULL4, is currently on display at ESS. Upon walking into the gallery, the viewer is faced with a single mannequin, the sole humanoid “performer” in the band. It is painted grey and outfitted in climbing gear, inflatable medical bags, an oxygen mask, and a cape of black balloons which conceals a tangle of thick black chords and an arduino. This composition alone presents a perfect example of how to conceal and reveal the hardware of a tech-integrated sculpture. The components used in the actual activation of the garment are integrated into its overall aesthetic and easily blend into the non-electronic parts of the work.

ULL4’s accompanying EP is a work of sound art called “AIR/BORN.” When the sound begins to play, the room is a charged mixture of playfulness and static anxiety. A creeping mix of tonal frequencies, industrial static, and jumbled voices plays in tune with the inflation of the medical bags on the mannequin. Each inflation signifies the beginning of different sections of the vocal audio. These inflations suggest respiratory by the mannequin, allowing it to physically participate in the composition of the sound. When these transitions are complete, NASA transmissions fill the space and although one can only decipher bits of the conversation, a feeling of escalating tension is very present. From the conversation, there seems to be some kind of problem landing an aircraft; the voices within the recording start to sound increasingly nervous. Coupled with recordings of countdowns mixed into the ambient background noise, this composition evokes a slow climb, almost as if the viewer is floating into space. 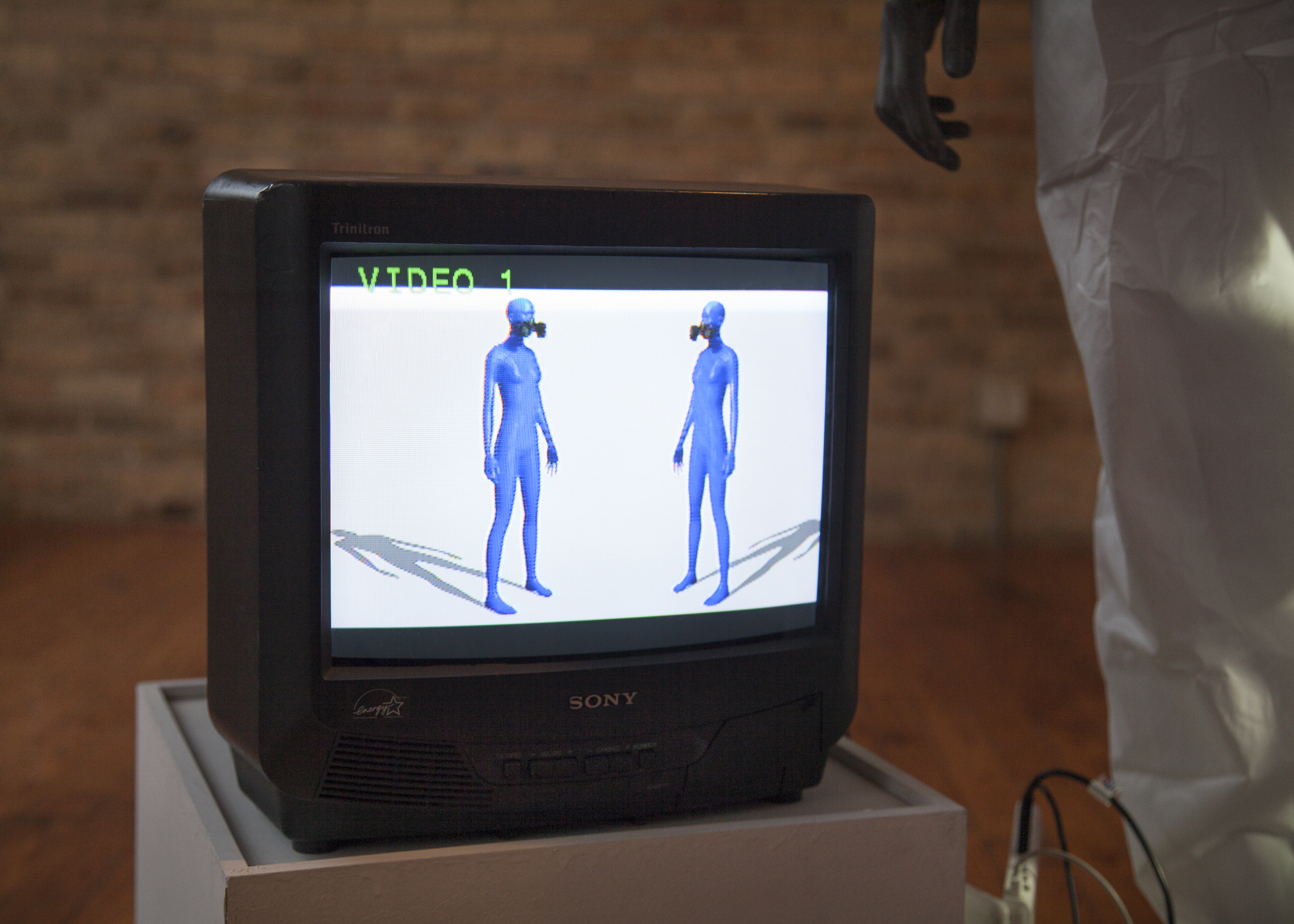 The tone of this iteration is heavy, fringing on oppressive. The work is aesthetically and electronically alluring, and involves a variety of tools, hardwares and softwares that contribute to and alter its concept. But without an exterior framework, it is difficult to connect the elaborate outfits and narrative of the sound piece to the original description of the mannequin bands as representing different genres of music. The various references and symbols at times overwhelm the piece’s intended meaning.

However, the performance is not meant to exist only within the confines of the physical world. In addition to its installation in the gallery, it also exists online. On the website, there is documentation of Blalock’s static performers — the mannequins within the physical space — along with the audio tracks from each iteration and a brief description of the performers’ genres. The disassembly of each work is followed by the online release of an interactive music video for the sound piece and performers as well as a live-streamed interview with Blalock and the performers.

The online component does a great deal to make the connection between these mannequin sculptures and their presences as individual artists. It brings them to life in a different way than the electronic activation of their wearables, giving them a platform for further expression. It’s a highlight, because it invokes the vastness of the internet, where simulations of art and physical reality circulate endlessly. The documentation acts like proof of life on the internet.

“I Sing the Body Cybernetic” works at the intersections of posthuman theory, fashion, technology, and sound art. The wearable electronics allow the initially lifeless mannequins to become a part of the work and exist as representations, and the technology allows the entire project to function without any human intervention after the “on” button is pressed. With the synchronic activation of sound and physical performance in the gallery space, and the extension of these performers into a virtual environment, the work questions boundaries between artist and artwork. In this context, the representation of the artist and the work that they perform are made up of the same body, physically and digitally connected so that one cannot exist fully without the other. Blalock acts as a puppet master for each one of these bands, proposing a new way of presenting sound and performance through a multi-layered system of algorithms, activations, and virtual and physical platforms.

“I Sing the Body Cybernetic” is on view at Experimental Sound Studio, located at 5925 North Ravenswood Ave., through April 28, 2019. Gallery hours are Sundays from 1 p.m. – 5 p.m. and by appointment. 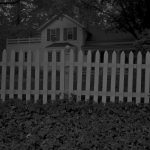 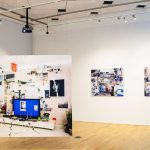