Here’s What to Expect in the 2023/24 Academic Year and How Students are Currently Feeling. 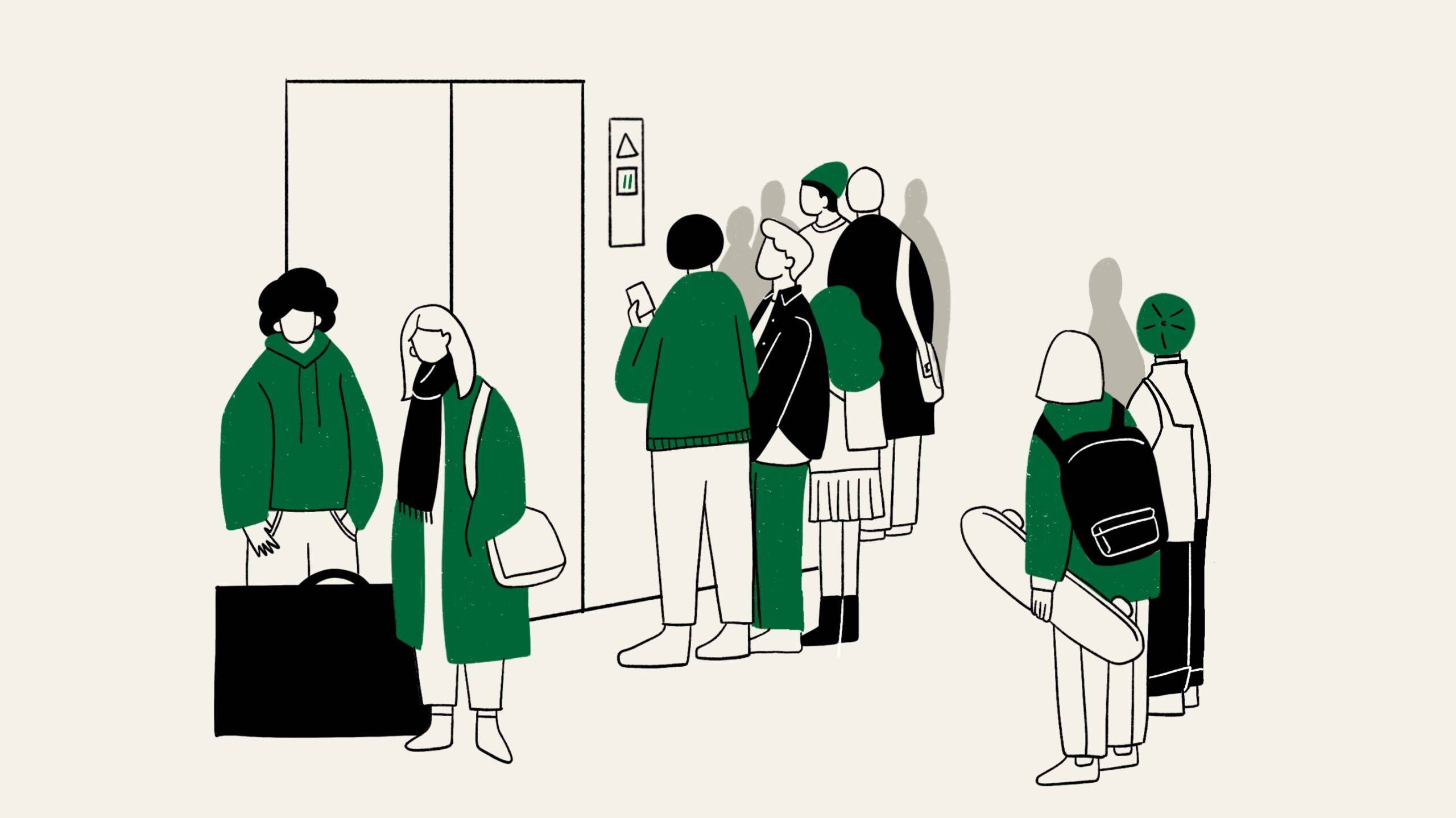 In Fall of 2023, SAIC will implement the first schedule change at the school in decades. Records of SAIC’s current schedule layout go back as far as 1984. What will these changes look like? Why did the change occur? What caused the change, what can we expect to see next fall, and how are people feeling about it?

Schedule changes were first seriously discussed as part of NEXT: SAIC Strategic Plan. In 2017, NEXT invited students and faculty to a gathering in the MacLean ballroom to share ideas for changes they’d like to see around the school. Over the course of the next few years, a committee was formed, run by Paul Jackson (Associate Dean of Undergraduate Studies), the other associate dean at that time, and Ayanah Moor (Associate Professor, Printmedia), to look into schedule changes to help envision a better version of SAIC for students and faculty. Jackson shared that NEXT’s goal was “re-imagining time to re-invigorate learning.”

In the spring of 2020 all classes abruptly moved online. Over the next few semesters, classes gradually returned to campus. During this transitional period the school ended its relationship renting classroom space from Spertus Institute for Jewish Learning and Leadership. Pre-pandemic, dozens of courses were hosted in Spertus’ building. Without that space the school found that classes had to be held online, not only because of the need for online classes, but also because there was not enough physical space on campus to host classes for full-enrollment. The school decided to not reinstate their relationship with Spertus due to the costs of renting space.

This space problem re-ignited the interest in other campus-wide changes that had been discussed as a part of NEXT. The schedule change ideas discussed in years prior seemed particularly relevant.

This schedule change does not mean an end to SAIC’s offerings of online classes. Jackson hopes that the new schedule change will give the option to offer all classes in person if chosen. However, Jacksonstated, “[It] doesn’t mean we aren’t going to have online courses. But we want online courses out of the pandemic to be an opportunity to make a really cool innovative curriculum.”

Provost Martin Berger said, “Had we not introduced a schedule change next year — at a time when our enrollment has made a significant recovery and when more and more students are returning to campus to study in-person — we would have been forced to put classes online simply because we lacked space and not because it made sense to teach particular classes in an online format.”

Three focus groups with students were conducted in the fall of 2022: undergraduate students facilitated by the Office of Student Affairs, student government representatives, and students who had ties to the Wellness Center.

Kate Snider (BFA 2025) was part of one of the focus groups. Snider said, “We did suggest having shorter studios for subjects like figure drawing. It’s extremely taxing and not everyone can stay focused that long, and if it’s shorter there are more opportunities for people to take the classes they want.”

Many students were not invited to any of these focus groups. With institutional memory turning over quickly in an academic setting where students graduate every four years, on top of the isolation from the pandemic, most current students have never heard of NEXT. The fact that some students were consulted hasn’t lessened a feeling from many current students that they weren’t given the opportunity to voice their concerns with the current schedule and give suggestions for the new one.

Jackson noted, “The things that students have said about what has been lacking in the curriculum has been consistent for decades. I don’t dispute that each class of students has their own unique point of view. There are some concerns that because we have contact with students, year in year out, we know they are big ones.”

A primary goal with the new schedule is to optimize space to allow for more class offerings and more balance between class time and personal time. Students struggle to get into classes and many students find that balance between work and school with the current schedule is a problem. With more courses being offered as well as breaks built into the schedule with Open Time some of these problems will hopefully be alleviated. Provost Berger said, “The changes are motivated by a commitment to improving the student experience — giving more course choice, providing greater access to shops and labs outside of class, offering more in-demand courses, and providing students more time for advising, counseling, jobs, and their outside lives.” In a Monday to Friday week, there is currently room for seven full-day studio courses in any given classroom. With the schedule revision, eight classes could be offered over the course of a week, a 14% increase in class space availability. For half-day classes, the current fourteen spots would increase to seventeen spots, a 21% increase of class capacity. There aren’t plans to fill every space to maximum capacity but the schedule change certainly leaves room for more classes to be added as well as spaces to not be at full capacity throughout the week.

What will the impact on tuition look like if the in-class hours are reduced? One part-time faculty member, who chose to remain anonymous here for fear of retaliation shared, “The administration cited the financial burden on students [for the change], but as far as I know students will be paying the same or more tuition for less time under faculty instruction and fewer required credits — arguably, a lot of what they’re in school for.”

On Nov. 30th, President Elissa Tenny and Provost Martin Berger sent an email announcing that tuition will remain flat for the 2023-24 academic year.

Regardless of the actual number on the bill some students are already feeling frustrated. “My money will no longer go as far as it used to. I feel like my time is being stolen and traded,” said Kirsten Kibler (BFA 2024). An undergraduate who starts in the fall of 2023 will spend 16.67% less time in studio classes and 8.33% less time in academic courses than students who have previously completed 4 year BFA degrees. However, shorter class hours will not cut faculty’s pay, according to an email sent to faculty. 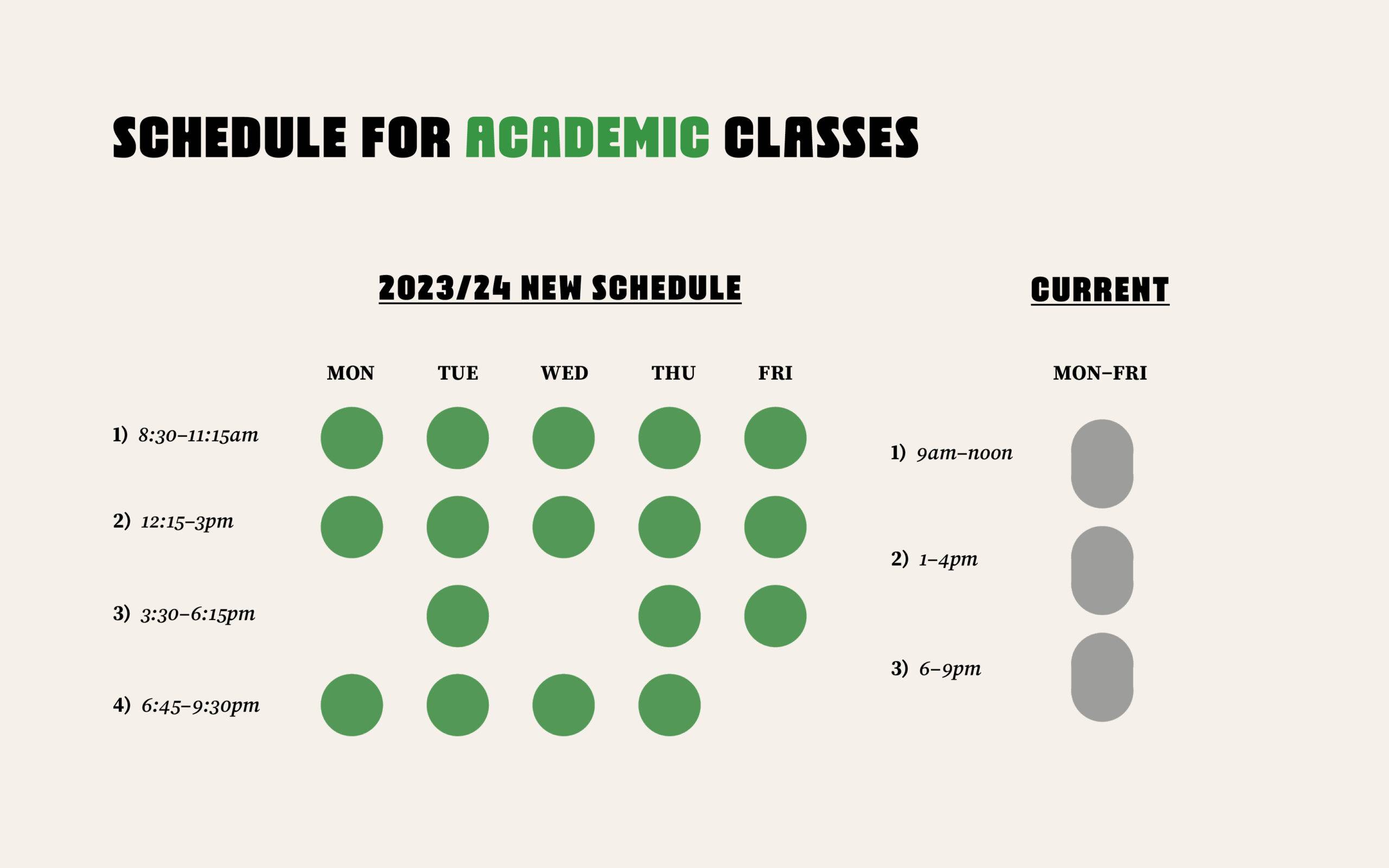 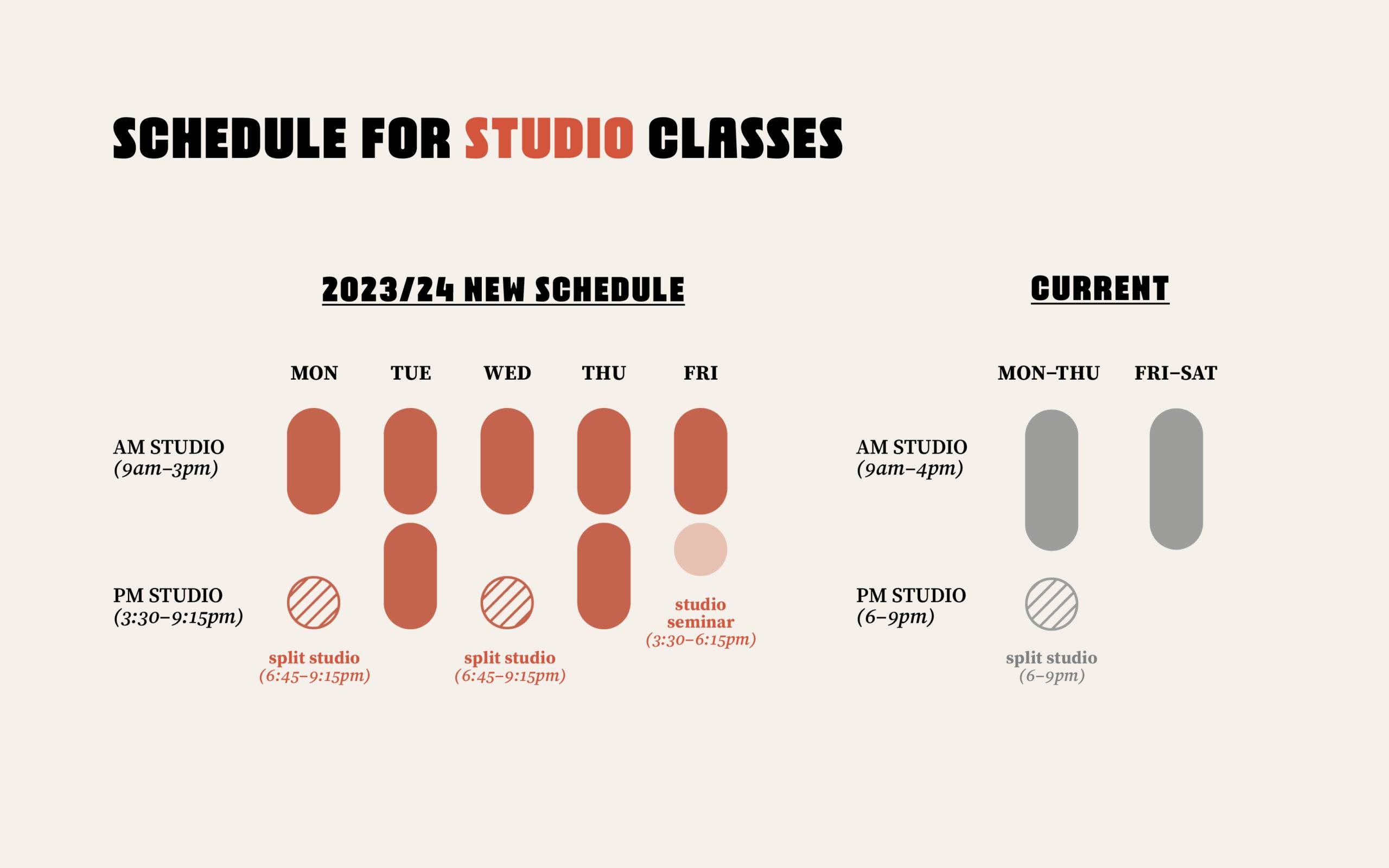 The current reaction around the schedule change in the student body is mixed. Some students are concerned that classes start earlier into the morning and end later at night. Poor attendance in morning classes was pointed at in relation to morning academic classes starting a half-hour earlier. Of 8:30 a.m. classes, Casey O’Connor (BFA 2024) shared, “I already have a really difficult time getting to nine a.m. classes without arriving feeling exhausted and out of energy before class even starts, and this would only worsen that.” Students who are commuters and live off campus said they are concerned about arriving for classes earlier in the morning and getting home safe for classes offered later in the night. Kristen Lee (BFA 2023), shared, “A lot of people, myself included, don’t take night classes because I don’t live on campus. It’s not safe to roam around at night and Safe Ride is a joke. This schedule doesn’t take into consideration people who commute at all.”

Other students are excited about the changes and the way they’ll free up time during the week. Students of all years struggle to get into the classes and having the chance for more class offerings on campus gives students a better shot at getting the classes they desire. With less time spent in class, students will presumably have more time for jobs and socializing as well. Tyler Herson (BFA 2025) shared, “I’m really hopeful that more options for morning and afternoon only studio classes will allow me to have a better balance between school and work.”

Is this schedule completely set in stone? When asked what would happen if the changes weren’t serving students, Berger said that the schedule change was open to adjustments in consultation with students, faculty, and staff. “I want to give it a shot,” said Kyla (BFA 2025), who was a part of one of the Fall 2022 focus groups. “I do really hope it’s for the best.”

6 Podcasts in 6 Unique Genres You Need to...

The Human Cost of the World Cup