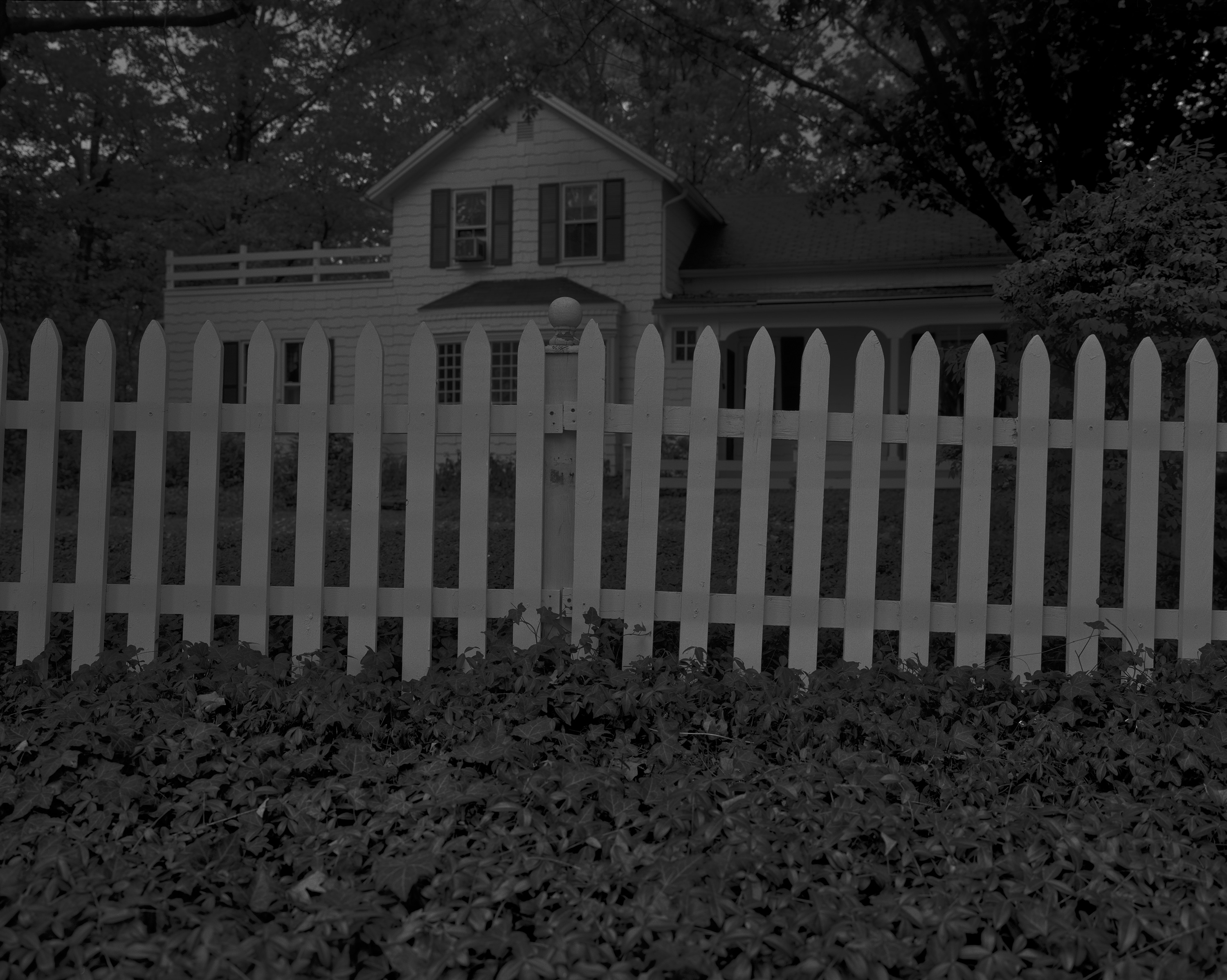 “Untitled #1 (Picket Fence and Farmhouse).” Photograph by Dawoud Bey, courtesy of the artist and the Art Institute of Chicago.

Monuments mark not only specific people and events, but also cultural assumptions of who and what deserves to be remembered. They depict two things at once: Their subjects and the desires of those who had the influence to decide what lives were worth casting in bronze.

But for every historical placard or memorial statue, there are many more stories whose significance goes unmarked. Some of these absences are places of contained motion: the place where a sign was carried in protest, the place where a ballot was cast. What are the places that become recognized as sites of public celebration or public mourning? Of shared loss or shared gain?

The landscapes in “Night Coming Tenderly, Black,” photographer Dawoud Bey’s current show at the Art Institute of Chicago, are decidedly unremarkable. But these tidy houses behind their picket fences and dense sweeps of forest all depict places of great significance: stops on the Underground Railroad around Cleveland, Ohio, and Lake Erie. They imagine the journeys of African Americans escaping slavery by fleeing North to Canada, moving from safehouse to safehouse under cover of darkness. They are images not of place but of transit. Quiet, expansive, and menacing, like the opening scenes of a film, they imply a narrative about to unfold.

This body of work, which was originally commissioned for Cleveland’s 2018 Front Triennial, is a departure from Bey’s primary focus in portraiture and street photography. People have always been at the center of his work. In “Class Pictures,” he shot teenagers at high schools around the United States, then paired their portraits with short autobiographical statements. His series on the Birmingham bombing, which opens at the Museum of Contemporary Photography in April, pairs contemporary subjects the same age as the children killed with adults the age they would be in 2014 had they survived. The images radiate a sense of trust: Even though they’re strangers, the sitters gaze at Bey like they’ve known him their whole lives. But it’s important to him to stay nimble in his approach. “I’ve never wanted to be my own oldies show, settling into a comfortable groove,” he told the New York Times. 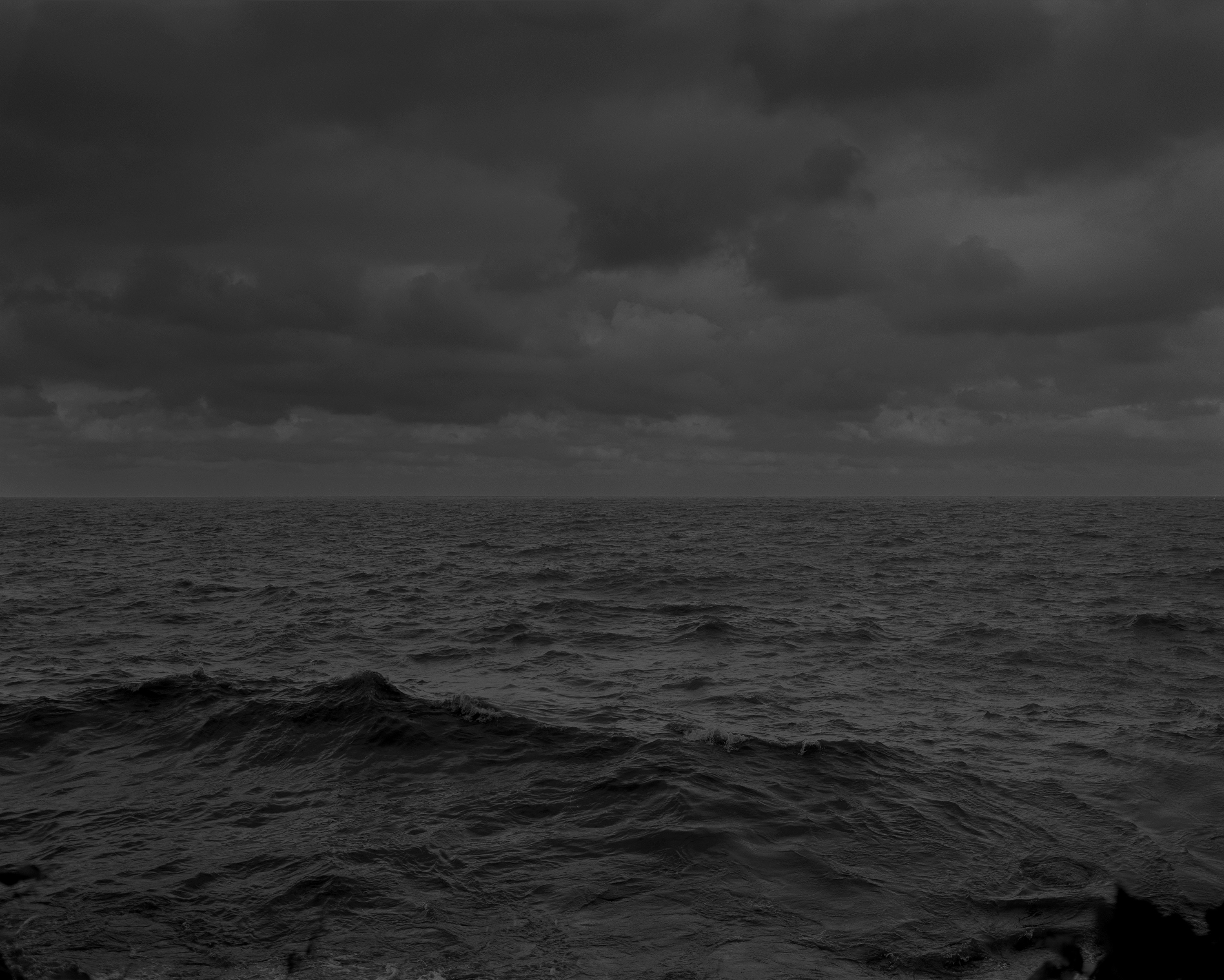 “Untitled #25 (Lake Erie and Sky).” Photograph by Dawoud Bey, courtesy of the artist and the Art Institute of Chicago.

The possibility of a human figure looms in the images of “Night Coming Tenderly.” Many show no human trace at all, just cut-outs of dense forest and vine that seem to expand beyond the confines of the image. “Untitled #17 (Forest),” seems to promise a figure. I keep searching the young, thin-trunked trees and crosshatched branches for a hint of a shoulder or a pair of eyes. But there is nothing, not even a trace of human contact: no plastic bag tattered in the wind, no lovers’ names carved into a trunk.

The photographs themselves seem to come from several epochs at once. They are black and white, but mostly they are various tones of black and silver. They are so reflective they could have been printed on patches of oil. The houses look largely unchanged from the 19th century, but there are a few hints that the photos are contemporary. A satellite dish sprouts from the rooftop of one, a boxy air conditioning unit juts out of the second story window of another. This gives the image the slight aura of being from a mythical, counter-historical time. “These pictures are not meant to be documentary in any sense,” Bey writes in his wall text. They depict points on a possible route. This placelessness is accentuated by the uncertain light: It is either dusk or dawn, and although it seems to be winter, because the trees are leafless, there is no snow.

Outside of the main gallery of Bey’s work is a salon-style wall arrangement of photographs, mostly landscapes, portraits, and street-shots that Bey has selected from the Art Institute collection. An Ansel Adams print of white birch trees against a black sky bristles with precise energy. In another context, these landscapes might be nothing more than banal scenes, nature romanticized in an era when a photograph was still measured by the impeccability of its printing. But in this context — sharing a wall with a Carrie Mae Weems photograph of a black man’s back, a document of welts stretching his length; Malcolm X holding a newspaper and smiling thinly; a white audience looking on in bored entertainment at a lynched man — they become ominous. Through Bey’s lens, the landscape offers up its dark, and occasionally hopeful, histories. 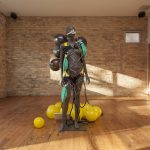