How Branding Helped Get A 28-Year-Old Nominated to Congress

It’s an identity system built and executed thoughtfully and cleverly. But is the brand truly “radical?”

What’s particularly interesting about 28-year-old Alexandria Ocasio-Cortez’s recent 57.5% to 42.5% Democratic primary upset is not that the candidate has never held political office, or that she could be the youngest woman ever elected to the U.S. House of Representatives; it’s that the grassroots campaign that buoyed her candidacy was pooled around a brand identity remarkably different from anything across the current political design landscape. It’s an identity system built and executed thoughtfully and cleverly. But is the brand truly, as publications from the Washington Post to Vox have claimed, “radical?”

The campaign’s five-person design team (all under the age of 35) produced an effective brand identity channeling the labor and civil rights movement communications of Cesar Chavez and Dolores Huerta — two Mexican-American political activists that founded the United Farm Workers Union. Good design isn’t just about being technically good, it’s about being relevant and appropriate for your intended audience; It’s a mirror, not a window. And Ocasio-Cortez is an outsider candidate. So, graphic design agency Tandem Design NYC gave the world an outsider brand. Some call it a revolutionary aesthetic — as in: of our revolution. In an interview with Fast Company Design, Tandem co-founder Scott Starrett, a close personal friend of Ocasio-Cortez, says:

“We spent countless hours discussing politics with her before she began her bid, so we knew exactly where she stood on the issues, we knew the caliber of person she was and the style of campaign she was running so it was a much easier challenge than most.”

Image courtesy of Under Consideration.

In this case, Ocasio-Cortez is her constituency — in a way the Irish-American Crowley simply isn’t anymore. The brand weaponizes these identity politics: the visual architecture first makes use of Jamie Wilson’s geometric sans-serif Norwester in its logotype; proceeds from donations to the design benefit the International Justice Movement. Supporting typography features Chris Simpson’s sans-serif Metropolis type family and Christian Robertson’s blocky Roboto Slab in deliverable executions. All typefaces, in realization of Ocasio-Cortez’s values, are free to use through open-source licensing — the kind of thoughtful consideration that authenticates the design approach end-to-end.

The candidate’s name makes notable use of the introductory exclamation point commonly found in Spanish, replacing irresistibly the sub-periods with five-pointed stars. The chat-bubble frame breathes life into the mark and communicates a sense of excitement and urgency evidently bubbling within Ocasio-Cortez the moment she speaks. The predominantly Puerto-Rican surname Ocasio means, roughly, “occasion.” The website (and some collateral) wield bilingual typography in refreshing fashion — representing both the candidate’s ethnicity and that of the 14th Congressional District’s demographics. A technical critique (perhaps the only one): the “DEMOCRAT FOR CONGRESS NY-14” is completely unreadable when the mark’s set in smaller sizes, like the sticky website header.

The campaign’s primary color is a deep purple (HEX #3c2d82), requested specifically by Ocasio-Cortez for its symbolism as balancing partisan red and blue color staples (since the year 2000). The purple is then complemented with a mustard-yellow (HEX #edc93f). The necessary Democrat blue (HEX #0842a3), rendered in royal intensity, completes the brand’s triadic color scheme. The result is something nearly familiar.

A portrait image of Ocasio-Cortez, by photographer Jesse Korman, has been praised for its “strong, confident, optimistic” composition, depicting the candidate as “modest, honest, and assertive.” The up-and-right angle of Ocasio-Cortez’s gaze also corresponds to the angle of the logotype, which together align most of the campaign’s look and feel. That low-left to high-right sloping is considered a positive slant — such a Euclidean geometry is indicative of growth and ascent. This isn’t the first time that oblique line has been wielded in politics; as many writers and designers have noted, including yours truly, the historic gold standard for political design remains then-Illinois Senator Barack Obama’s 2008 presidential campaign.

And I invite you to appreciate the comparison: 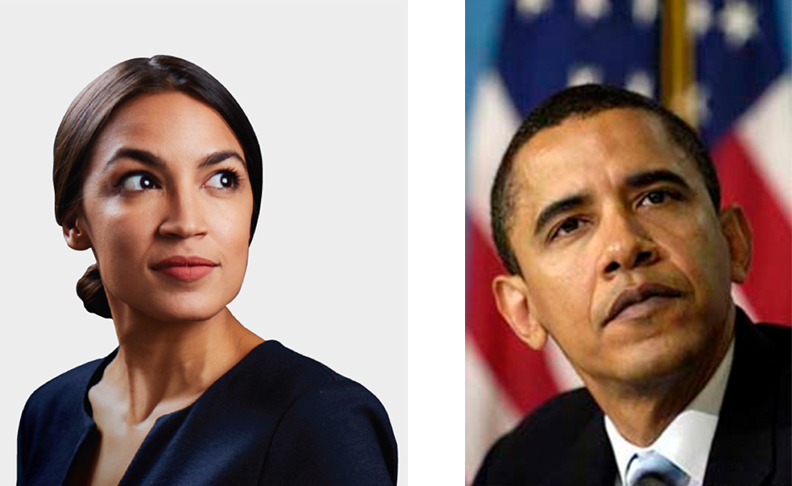 Ocasio-Cortez’s avatar (Which is actually kind of blurry?) bears a striking resemblance to photographer Mannie Garcia’s candid capture of Obama at a 2006 media event with then-Kansas Senator Sam Brownback. Artist Shepard Fairey, of course, then manipulated the latter image into the iconic HOPE poster (and had to settle out of court for violating its copyright) — itself stylized like artist Jim Fitzpatrick’s mythic poster of Marxist revolutionary Che Guevara.

What’s more, Ocasio-Cortez’s and Obama’s brands share the same Chavez/Huerta source material. Obama’s “Yes We Can” slogan — first used by the candidate during his 2004 Illinois Democratic primary race for the U.S. Senate — is appropriated from the United Farm Workers’ 1972 Spanish “Sí, Se Puede.” The phrase was coined by Huerta during Chavez’s fasting in protest of Arizona legislation prohibiting boycotts and strikes by farm workers during harvest seasons. Ocasio-Cortez’s website even uses a second version of that oh-so-sweet Optimist’s Angle on her splash page. Expect Ocasio-Cortez to lock in a slogan over the coming months. 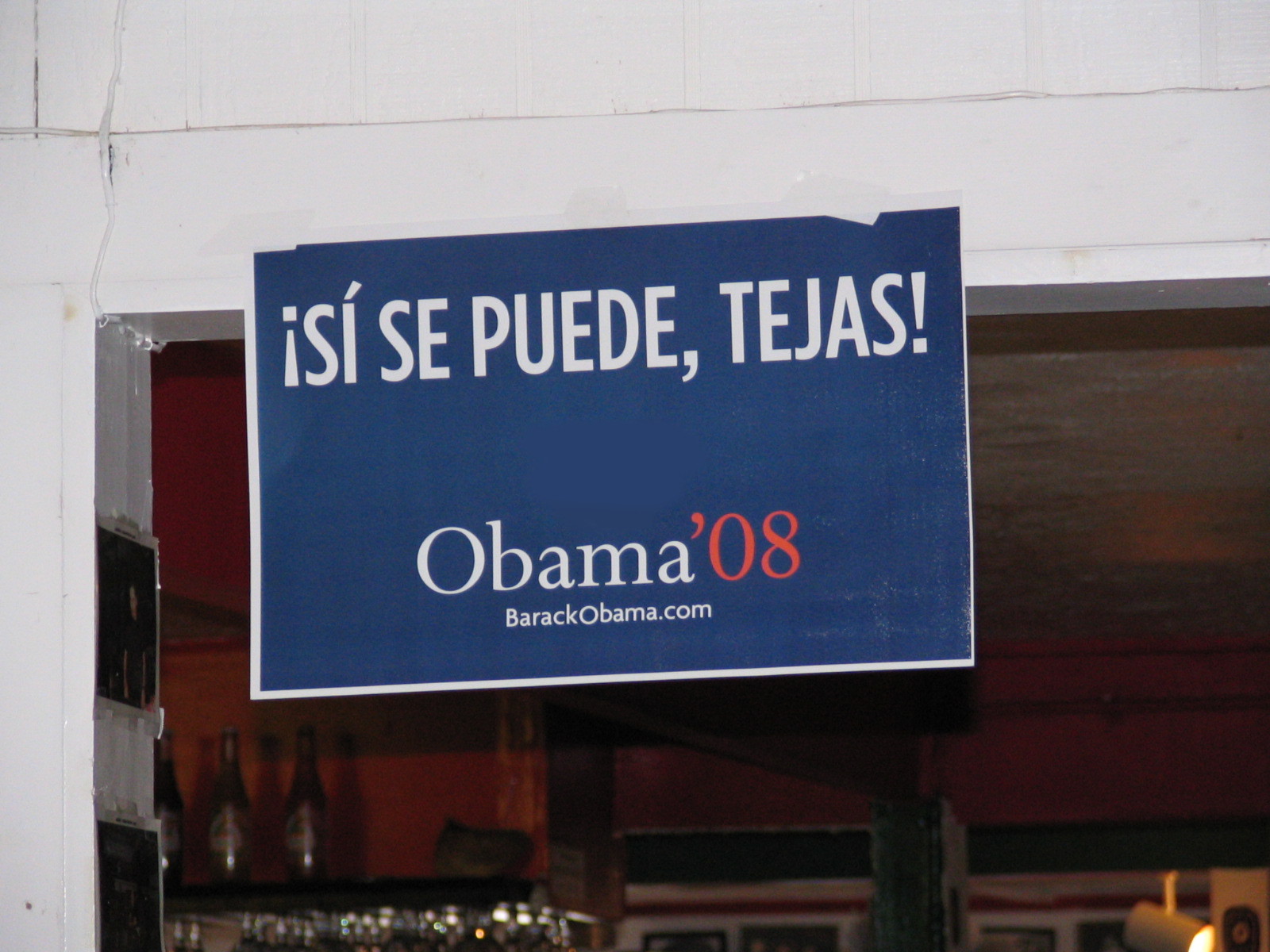 What about this is supposed to be radical? To conflate the atypicality of the candidate’s brand identity quality with the unlikely popular adoption of her platform is a mistake — one that carries with it assumptive misunderstandings about what it is that makes design useful in the first place. The Ocasio-Cortez brand is technically good — and it’s relevant and appropriate. Sure, the identity mostly deviates from American political clichés, but those clichés are few, and despite the critical acclaim we’re still seeing blue stars for someone running on the Democratic ticket. What’s exciting about this brand is that good design is being rescaled from national to local: When House campaigns can look this good, there’s no more room for excuses. 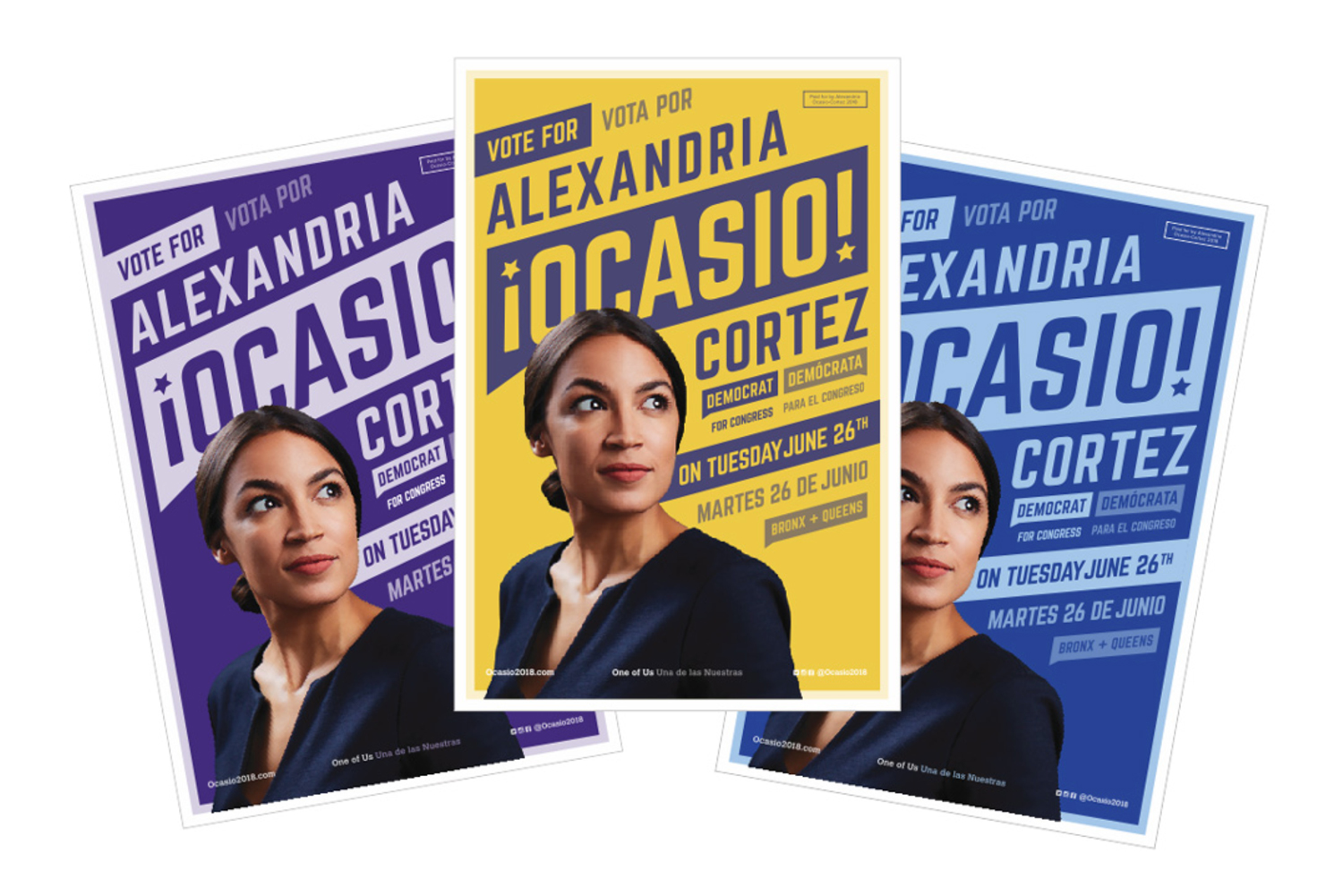 Image courtesy of Under Consideration.

It’s no surprise that this graphical redux surfaces during an acute moment of Obama withdrawal. Just last month, New York Magazine openly asked, “Where is Barack Obama?” An exasperated progressive base is desperate for a new unity, and they may have found a new visuality to calibrate them. After all, that’s what brands are for. Design is the market corollary of politics; it is the intentional making of decisions on the behalf of others. That effective commercial branding styles have overtaken Congressional political campaigns is further evidence state and market operations have completely merged — and that institutionalized political symbolisms no longer have the capacity to peddle change (As I’ve previously noted, President Donald Trump’s general election campaign aesthetic has also curiously jettisoned traditional United States iconography.).

Still, the Ocasio-Cortez visual strategy is what identity designers call monolithic. The visual elements are fixed and merely stamped per use, which is a branding tradition 4,700 years old (roughly). If her team really wants to be of our revolution, they’ll open up their building blocks to public remixing and fine-tune their touchpoints, like the candidate’s social media presence — something that Hillary Clinton’s campaign nearly perfected during the 2016 general election.

Time will tell if Alexandria Ocasio-Cortez can deliver on the expectations her brand sets up. It’s certainly a tall order, but in a district that leans Democratic by 29 points, the real challenge will come after the election.