The Museum of Contemporary Photography’s exhibition, “PetCoke: Tracing Dirty Energy,” raises awareness about the biohazardous substance living closer to home than many of us think. 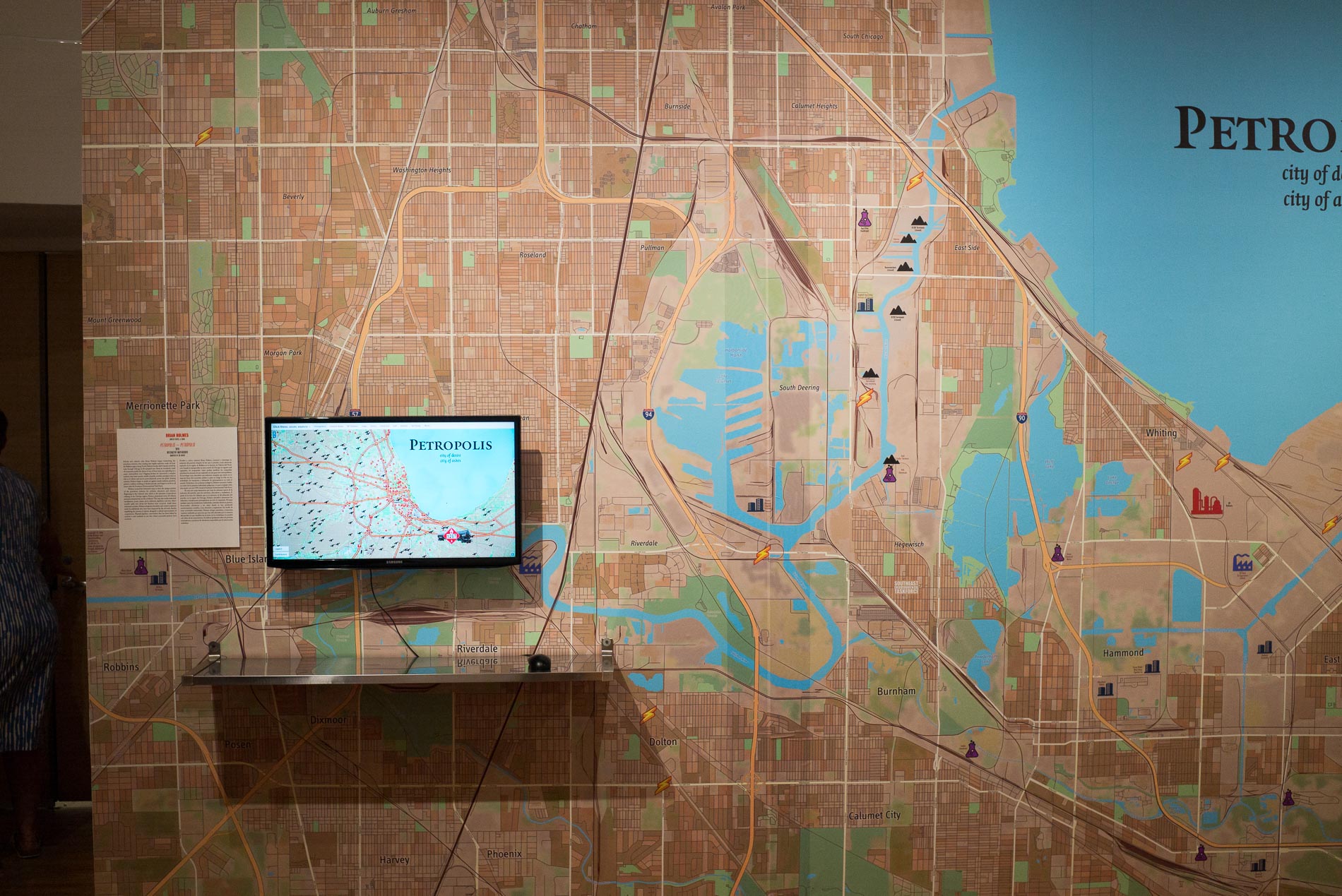 Environmental problems are often represented as being located somewhere removed — far away from regular life. The uncomfortable reality is that toxic pollution is closer to home than many Chicagoans know. KCBX, a Koch brothers company, stores “petcoke,” also known as petroleum coke, in two massive piles on Chicago’s southeast side.

Both piles, each four or five stories tall, are so huge that either one could easily cover an area as large as Humboldt Park. The fine black dust is a carcinogenic byproduct of oil refining, made to be burned as a fuel for power plants.

On windy days, powdery clouds of black petcoke dust drifts off the piles and into the adjacent neighborhood of East Side. The dust coats homes and finds its way inside through even the smallest of cracks. When inhaled, it settles in the lungs and stays there, causing respiratory and circulatory problems.

“Petcoke: Tracing Dirty Energy,” on display at The Museum of Contemporary Photography (MOCP) through October, does not attempt to be objective about the impact of petcoke. The exhibition takes a position firmly against the storage of petcoke in Chicago, showing pieces that raise awareness about this very real and devastating problem.

School of the Art Institute of Chicago (SAIC) Professor Claire Pentecost’s installation “A Library of Tears” is striking in its thoughtful and strategic display. The piece’s teardrops are populated with materials that remind the viewer of a litany of crimes and sufferings: plastic, dirty oil, dead plants, bone, metal debris, uncooked ash-covered beans, and petcoke itself. Beautifully dirty and precariously suspended by wires, each teardrop is a fragile egg, pregnant with the potential to sicken and kill.

Behind the tears is an expanse of mustard-yellow wallpaper, upon which the viewer is able to see the image of an ancient Greek person, lazily reclining and reading a book. Near him, drops of moisture fall from plants and vegetables into grim craters below. It’s an indictment of the average museum-goer: educated and compassionate, but idle. 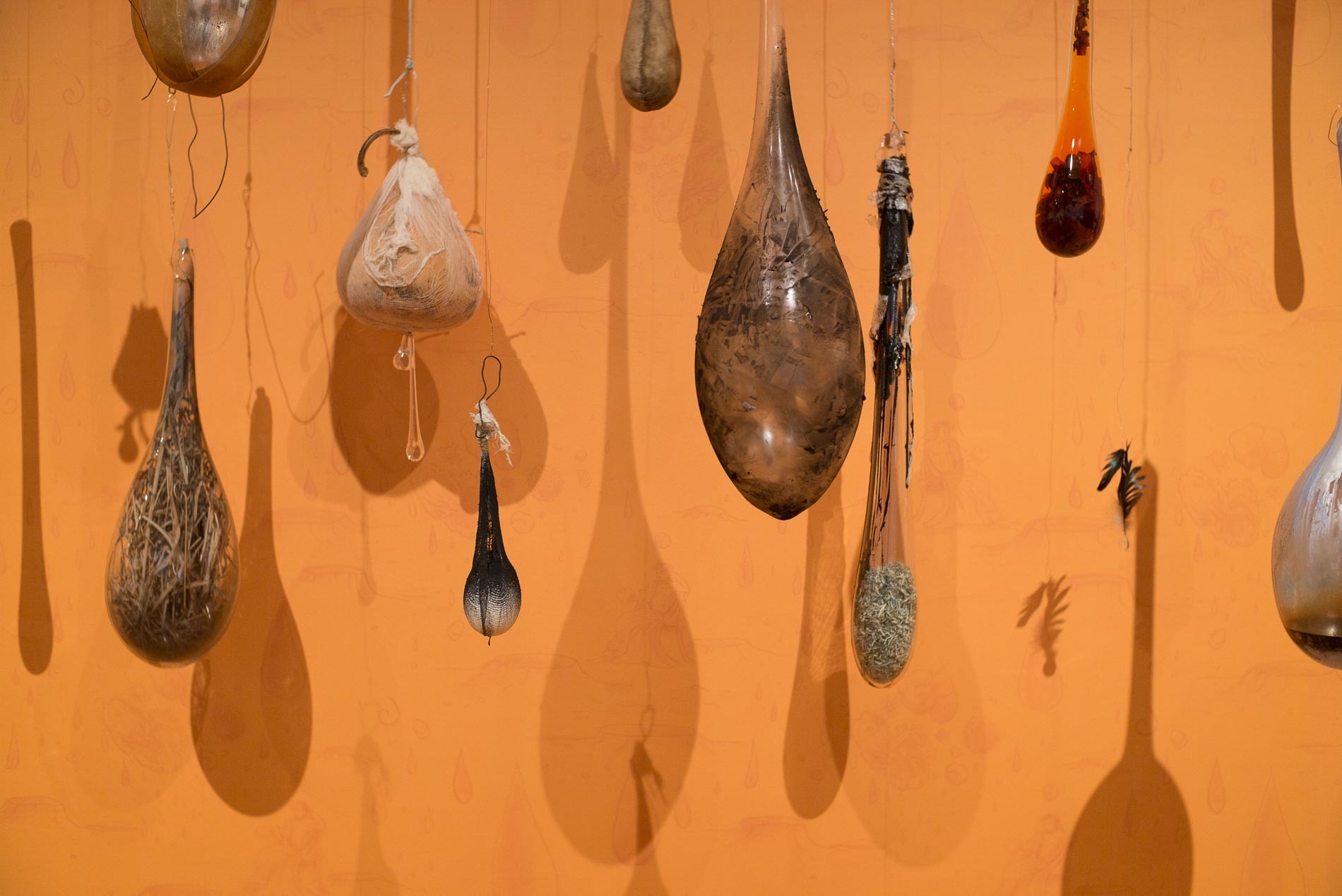 Artist Terry Evans has two separate sets of photographs up, dramatically different from one another. Upstairs, Evans’ close-up portraits of local activists who continue to fight against petcoke in Chicago are masterfully done, powerful, and unsparing. They do not flatter the subjects, but instead revealing a burning determination and endurance.

However, in the same small place, there’s an audio track of activists speaking, and a great deal of text next to each photograph. Rather than working together harmoniously, the three elements compete with one another, and the result is distracting.

Far more powerful are Evans’ aerial photographs: The strikingly beautiful pictures of faceless industrial terror; the transport mechanisms of modern desire and commerce; the unbelievable hugeness of the petcoke piles.

Victoria Sambunaris’ grid of 45 deadpan photographs of oil tankers is an exercise in the power of simple repetition. Each tanker was photographed along the Houston Ship Channel, a natural waterway that has been dredged and enlarged to accommodate more and more tanker traffic.

Steven Rowell’s film, “Midstream at Twilight,” follows the unseen footprint of the Enbridge Pipeline, which runs across Canada, through the United States, and into Illinois. Largely shot on drones, the film is quietly foreboding.

Marissa Lee Benedict and David Rueter’s film, “I Can Only See Shadows,” feels like a silent episode of “The X-Files,” and that’s a good thing. In the film, an anonymous investigator stalks about at night collecting particles of pollution, then returns to a hotel room, where he uses strange technology to extract information from the particles, discovering the hidden patterns in an effort to discover how the black dust communicates with the body as it’s being poisoned.

The Geisler/Sann installation is probably the most unsettling and vaguely threatening piece in the exhibition, making it a highlight. A pedestal holds a lighted plexiglass cube containing 102 grams of petcoke that, if released, would send people racing for the exit.

The size of the cube reduces the larger social issue to geometric measurements, while simultaneously provoking unsettling questions: How much of this stuff does it take to give an adult cancer? To give a child asthma? To make a family so exhausted from fighting that they finally give up and abandon their home?

As I stood staring at the cube, one of the neighborhood activists I had seen pictured upstairs walked into the room. She gazed at the cube and shrugged, visibly unimpressed. “Hmm. It’s what we live with every day,” she said. She moved upstairs, where other activist guests congregated around the portraits and text. Downstairs, the usual art crowd sipped wine and chatted animatedly.

The Museum of Contemporary Photography can be hard to find. There is very little signage pointing to the museum’s entrance, and looking beyond the double glass doors, a museum is not immediately evident within. One wonders how educational “PetCoke: Tracing Dirty Energy” can truly be, sequestered on Michigan Avenue in this manner. The show seems removed, but only 13 miles away from what and whom it purports to represent. 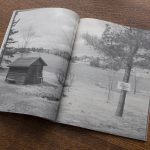 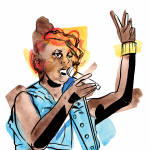