Reality television shows abound … but couldn’t there be just a few more?

Reality TV is a genre that has come into its own in my lifetime. While I am not usually a fan of televised voluntary misery, I have watched my fair share of it, especially during the long period of unemployment I faced after college and when spending quality time with family. Runways, bakeries, mansions, very big stages — I can see (for the most part — I mean, bakeries?) the escapist appeal.

Reality television captures humanity at its best and worst, for viewers to judge, hard, from the anonymous comfort of their sofas. In spite of the plethora of shows available, however, there are still quite a few gaps to fill. Here are a few pitches I wish someone would take to a network. The money would roll right in.

The future always seems to be near. In “Virtual Reality Reality,” it finally arrives. The show follows a group of people plucked from the street and dropped into a post-apocalyptic world via immersive VR gameplay. There, they fight for their lives for four straight weeks, eating, sleeping, running, screaming, and so on, with VR headsets in a carefully controlled environment.

To simulate the desperation of living in such a world, surviving players receive monetary awards based on their stats, and real electric shocks when they are injured. Food, sleep, and other supplies are only for those who find them in the game. And, because this is a reality TV show, not a virtual reality TV show, viewers only watch the players in the real world. No VR scenes, at all.

Teenagers are extremely people. In them, emotion and personality are tremendous, not yet faded and disparaged by time. Starring a changing cast of suburban high school students who are by turns sarcastic, adoring, awkward, privileged, bold, and mistaken, “Extreme: Teenagers” has all the ingredients of a documentary-style hit. The show’s characters will even brand themselves — there is little a teenager loves more than a label.

I imagine “Extreme: White Collar” (like “The Office” and “Parks and Recreation,” only real), “Extreme: Home Composters” (an untapped, but dogmatic, demographic), and “Extreme: Publishers” (who wouldn’t want to watch a show about the employees of a perpetually dying industry?) will be follow-up successes.

My favorite reality television is British. Something about the accents lends sophistication to shows about antiques and houses. “Tea Time” is a close look at the drama of afternoon tea. Taking place in a quaint country village, the show captures residents’ untoward — at times even unseemly — opinions of Mrs. Cooper’s finger sandwiches, Mr. Thatcher’s visits to the widow Greener, and Ms. Porter’s flirtation with the vicar.

Inevitably, “Tea Time” will need an American-friendly version — a hole that “Cheesecake Factory Hour” is readymade to fill.

“Lunch at the Desk”

For all the perils of fishing, the surprises in believing that one can dance, and the poignant revelations that people in America have talent, nothing will quite stun or move viewers like “Lunch at the Desk.” Three amateur contestants are paired with three friendless individuals who eat lunch by themselves at their desk at work, every day. After in-depth consultations, contestants must drastically improve the individuals’ lonesome meals.

Expert judges choose who moves on to the next round. The show culminates in the greatest challenge yet: Each finalist must improve the lunchtimes of an entire office of pitiful at-the-desk eaters.

“All for One: All for Love”

“All for One” combines the fundamental search for love with the hilarity of hoaxes and hidden cameras. Each season opens with a person who is decent and looks okay, but is unloved. This contestant believes the show will introduce them to potential mates. What actually follows is a barrage of hired actors, paid to flirt and to woo. Unbeknownst to the actors, however, they were selected for their potential compatibility with the contestant.

At what point will pretending become real? Will anyone find love? Will Sting, Bryan Adams, or Rod Stewart agree to guest spots? These burning questions are just waiting to be answered on “All for One.”

No repertoire of reality TV show pitches would be complete without one that features kind-of celebrities. In “Metalife,” the cameras are turned as the show exposes normal people doing everyday things, while a panel of reality television icons judge their every move. 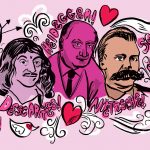