Leonard Suryajaya’s “Don’t Hold on to Your Bones” is challenging but deeply worthwhile. 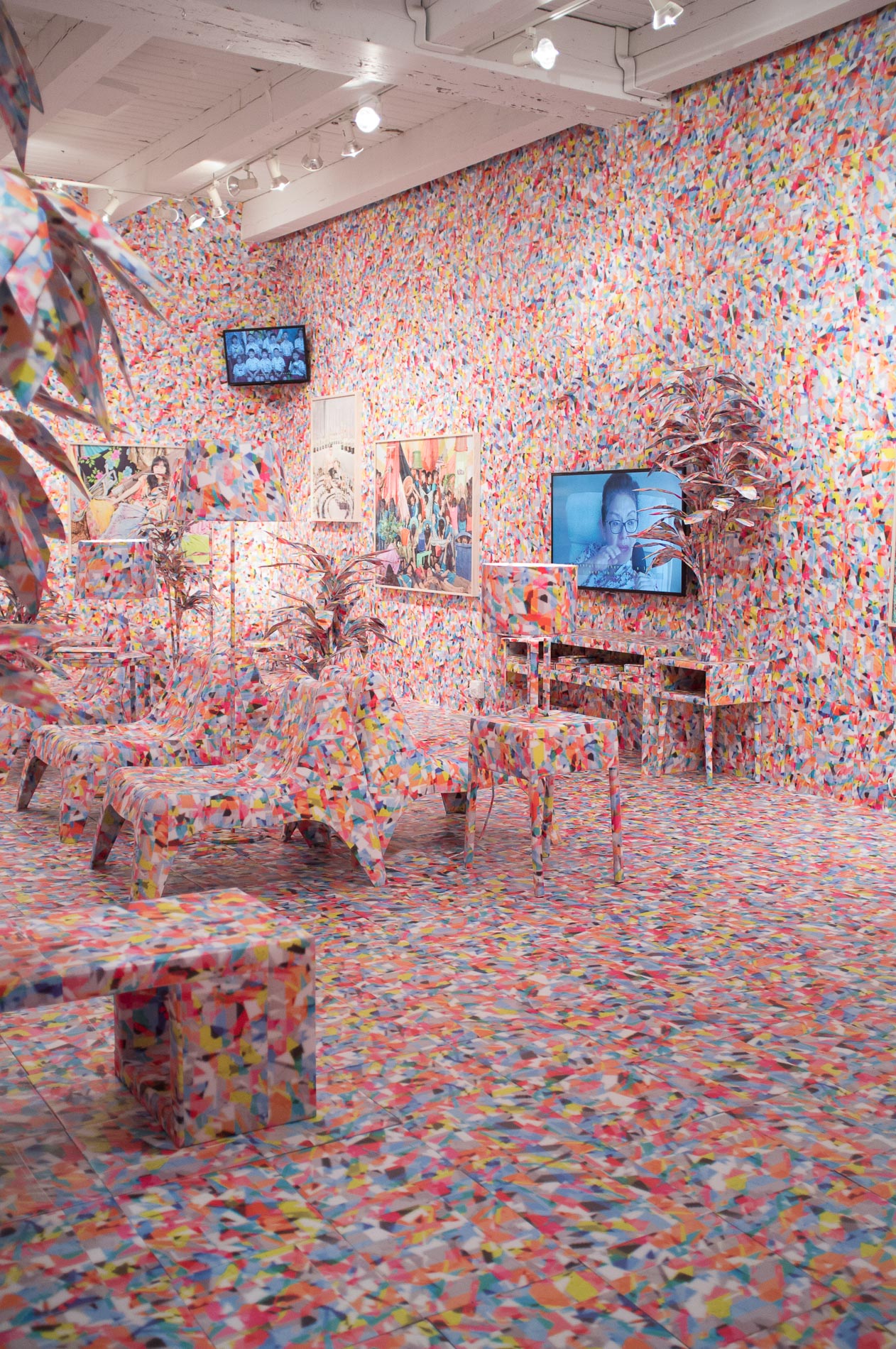 Imagine a sitting room. An eye-piercingly kaleidoscopic pattern repeats endlessly, covering nearly every visible surface: the walls, the floor, the couch, the chairs, the lamps and plants, the interior of the microwave oven — even the security cameras and the buttons on the telephone.

Welcome to Leonard Suryajaya’s “Don’t Hold on to Your Bones,” a liminal space wherein the recent graduate of  SAIC’s MFA program (2015) tests the limits of our imagination and his family’s patience, and where he works out the struggles of dislocation, integration, and family.

Huge photographic prints display elaborate, bizarre tableaus, and on video monitors hung throughout the space, a choir of schoolchildren, gums and teeth gruesomely exposed by dental cheek retractors, drool into their uniforms as they sing “God Bless America.”

So much of Suryajaya’s work is grounded in negotiations of displacement — cultural, sexual, generational, intercontinental — and is informed by his experience of growing up a dual minority. He is a Buddhist in Muslim-majority Indonesia, and a gay man in a nation where a former government minister recently called for the killing of LGBTQ people, and where anti-LGBTQ sentiment has seen a sudden, violent increase.

Ritual is a recurring motif in Suryajaya’s work. His last show, “Different Blood Type,” featured vérité footage of the funeral ritual held for his grandfather. This current show features more elaborate, deliberate, and carefully edited video work, a ritual of Suryajaya’s own imagining.

It begins with Peter, Suryajaya’s male partner. He is seated between Suryajaya’s Buddhist birth mother and Muslim surrogate mother. The mothers disrobe him. Peter becomes the helpless subject of a ritual that seems to deepen his displacement: Looking sweaty and exhausted, a papaya is smashed over his head, and the the seeds and flesh are massaged into his skin.

He is spat upon, cleaned up, and showered with money and confetti before being bundled up and carried out by boys in school uniforms.  They deliver Peter to a stoic Suryajaya, who is prepared to cart them both away on a bicycle rickshaw, but the video fades to an uncertain black before they depart.  The ritual seems to symbolize an effort to integrate Peter into the family, though the process itself is harrowing.

In another video, the artist interviews his mother while a bespectacled Peter sits in the background, working on a computer, wearing headphones and partially obscured by a huge roll of bubble wrap. He’s physically close but emotionally protected from the conversation and any stinging words that might come out.

The resulting conversation reveals that Suryajaya’s mother accepts him and his partner, but also that she struggles with the course of her son’s life. This process of dislocation, disruption, and (hopefully) integration, is difficult and painful for everyone involved. It’s hard to set aside the ideals that gave structure to one’s life.

Suryajaya has tremendous empathy for what his mother is going through. She, too, is subject to feelings of dislocation and the suffering it brings, and like her son, she must face the challenge of crafting a new self and re-integrating it into the existing family structure: How to maintain a cherished family and integrate a new, unexpected element?

In 1971, Claude Levi-Strauss said, “Ritual debases thought in order that it should meet the requirements of life.” In other words, we create rituals in order to fill in the gaps in our everyday lives, to give shape, meaning, and a sense of closure to our pain and struggles. Suryajaya is in the process of doing that in his exhibition.

This is challenging work, demanding time and patience from the viewer.  At the same time, anyone who has suffered through visiting a significant other’s family will be familiar with the sense of bizarreness, the stress, and the helplessness shown in Suryajaya’s images. They evoke being trapped with an unfamiliar group of people, each of them carrying a separate set of expectations and demands, and the feeling of exposure and vulnerability that comes with that experience.

“Don’t Hold On to Your Bones” is at the Chicago Artists Coalition, at 217 North Carpenter Street, through March 24. 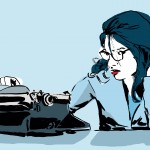 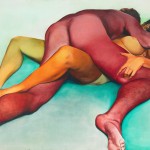