Not Just a Pretty Cover

A visit to Editions Kavi Gupta yields a trove of artists’ books and hard-to-find tomes.

A Visit to Editions Kavi Gupta

“Print is dead,” remarked Dr. Egon Spengler in the 1984 classic Ghostbusters when asked if he read in his free time. That character was one of the first to retort the debatable (though often quoted) sentiment decades ahead of the fuss around reading from screens and the Internet. Oil painting and the Great American Novel have also been targets of this statement. But, event those who rally behind the idea of print’s virtual successor wouldn’t say that print is yet extinguished… maybe just wasting away feebly in a corner.

Print is not dead. Book sales and subscriptions will continue, and there will always be space for tactile modes of information in invested circles, such as the art world. While many artists have wholly embraced social media platforms and experimented with the implications of online identity, they can also value tangibility, the palpable quality of paper, and the art-object. There is still a market for zines, independent publications, and artist books. Thanks to Editions, the newest curated bookstore of the West Loop’s Kavi Gupta Gallery, Chicago now has greater access to that market.

Though artist books could be said to as old as art itself, the artist book movement took off in the late 1960s as a democratic means by which to produce and distribute experimental art with a new social conscience. Recently, there seems to be a revitalized interest in zines and art books, and independent publishing companies have answered the call. Printed Matter, the New York artist bookstore founded in 1974, first hosted an artist book fair in 2005. In 2013, Los Angeles followed suit, and the list of art book fairs continues to grow as a public following and readership are expanding. 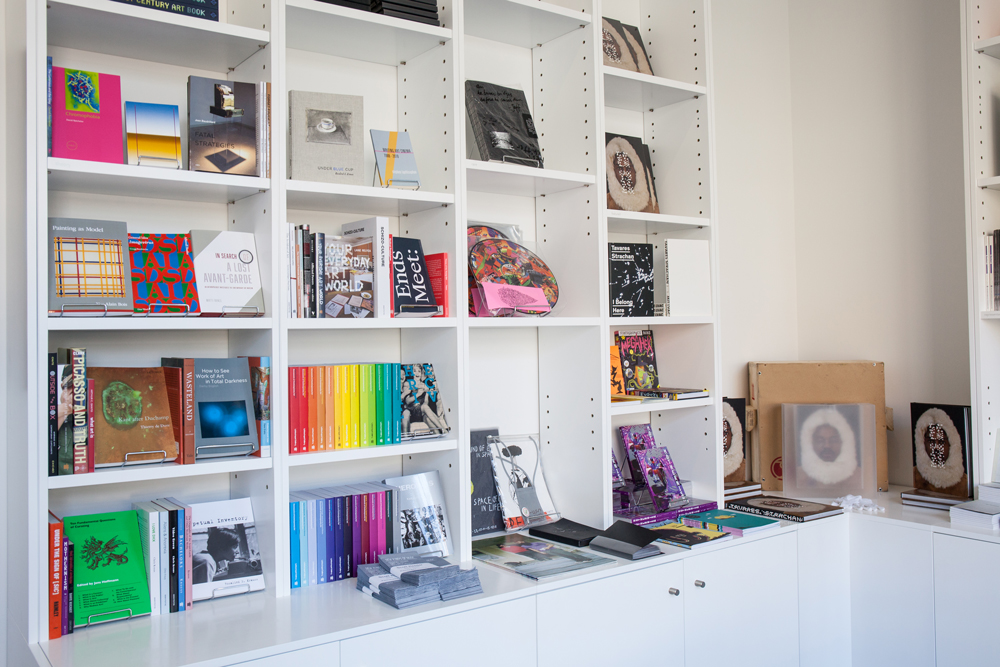 Kavi Gupta Gallery opened Editions in September 2014. It features contemporary zines, graphic novels, monographs, theory, and criticism as well as rare artist editions and out-of-print art books both local and international. Editions is the only bookstore in Chicago that is solely devoted to artist publications and art multiples, and more notably, the only one directly associated with a gallery. The selection is curated and managed by Kavi Gupta Publications Manager and Editions Manager Jessica Campbell (SAIC MFA 2014) with the objective to provide visual literature that coincides with the work exhibited in the main gallery space, extending the critical discourse. Kavi Gupta and Campbell are currently building a schedule of guest lecturers, performances, and writers to supplement with educational programming for the new space.

In addition to artist books and catalogues of work shown in the gallery, Editions brings in a variety of printed material and artwork. About half of the published works found in the space are produced by artists with Chicago ties. Many of the authors and artists are SAIC alumni, faculty, and students, including Edra Soto, Gregg Bordowitz, Nick Cave, The Hairy Who and Sally Alatalo, among many more. Campbell has also brought in internationally-published books on critical that would otherwise be difficult to procure in Chicago. Some notable publishers are Sara Ranchouse Publishing, Nieves, Renaissance Society, and Green Lantern Press. As the presses churn out an increasingly wider breadth of artist books, publishing houses and their editors have become a new breed of curators. Campbell hosts a monthly book club, held in the space, and runs a blog for the gallery with new recommended titles and publishing companies to keep an eye on, all stocked and shelved in Editions.

Campbell joined the Kavi Gupta staff during an undergraduate internship, helping the Communications Director (and SAIC alumna in New Arts Journalism), Whitney Stoepel. Her background working with an independent Canadian publishing company and years employed by bookstores prepared her for her position. Campbell now holds a more administrative and curatorial position, but devoting time to her studio practice remains a priority. She has an upcoming show at Roots and Culture and has a number of zines in print by western Massachusetts micropublisher Oily Comics. One of her most recent zines is entitled My Sincerest Apologies. 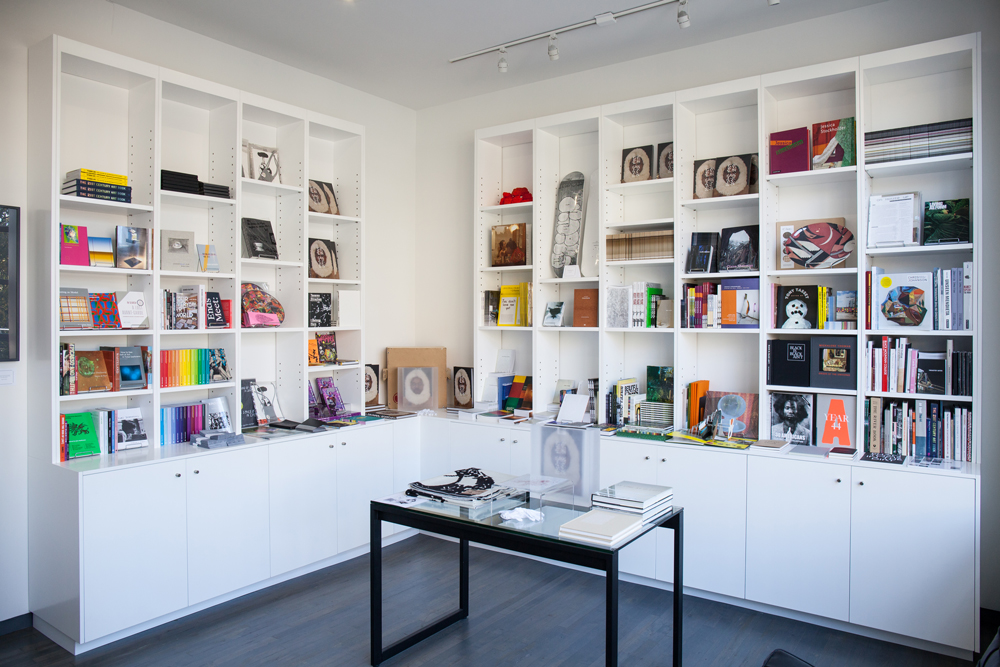 When asked why she took a permanent position to play a major role in establishing this new space, Campbell perfectly summed up the symbiotic relationship that the gallery has with its new shop: “Books are a democratic tool, making information and imagery accessible in a way that counter balances the [conventional] art object. That is especially evident in this space. These priceless objects are cycling through the gallery, a public venue for people to see and collectors to buy. The bookstore, the publications component, adds a way for disseminating that work in another way; it doesn’t have to stay within these walls.”

Printmedia professor Alex Laurie Valentine III incorporates a field trip to Editions into his course curriculum, believing the space to be an important asset to Chicago. “Printing technology, production and design really shines when applied to arts and cultural publications,” he says. “Art publications foreground high quality printing and finishing techniques – embossing, varnishing, die cutting, wraps, inserts and more. Print publications still play a primary role in the promotion and reception of ideas within artistic practice and discourse. Having those kind of publications in proximity to artworks is essential.”

Artists’ books could be said to embody the invitation to “please look and do touch”; they have the physicality of art but differ in that they are permissibly tactile and are readily collectable. The medium is sharable, and the reader can pass along this object, granting it an expansive accessibility outside of the space of the gallery. The success of curated book spaces such as Editions demonstrates that even in a rapid-paced digital age, printed material proves to be a valuable communicative medium: accessible, diverse, clever and by no means archaic. 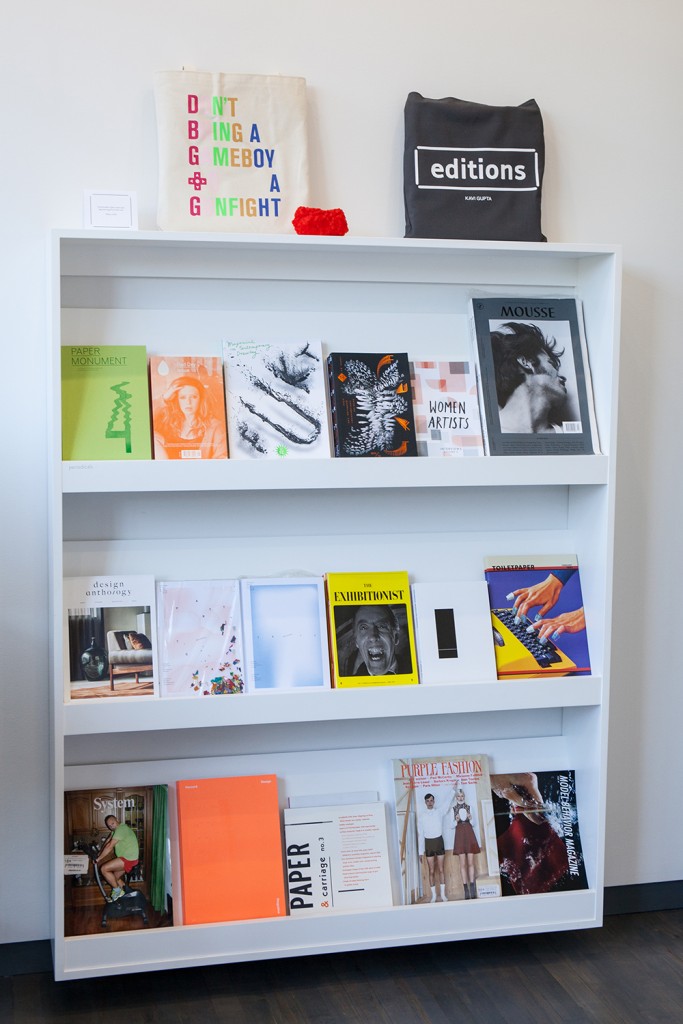 Some Recommendations from Editions:
Mothernism by Lise Haller Baggesen
Let’s Talk about Love by Carl Wilson
We Have Never Been Modern by Bruno Latour
Less Than Dust by Julien Ceccaldi

The next Editions Book Club Meeting will be a discussion of F. Scott Fitzgerald’s On Booze, and will be on Tuesday, March 31 at 6pm.

For more information about how to submit your printed material sold on commission on the shelves at Kavi Gupta: Editions, contact jessica (at) kavigupta (dot) com. 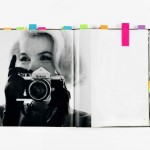