Op-Ed: An SAIC Student’s thoughts on considering intervention in Syria

Today, after the militarization of our peaceful revolution, the situation has grown more complicated and tragic than ever. With foreign boots on the ground fighting on the regime’s side and non-stop shipments of Russian arms to the Syrian regime, the opposition army saw an influx of foreign fighters claiming to be fighting on its side to topple the criminal regime and liberate the Syrian people. Those militants took over the vacuum of support for those who were defenseless but have now turned against the Syrian people by beheading, killing and detaining Syrians indiscriminately, following in the footsteps of the Syrian regime.

As the world debates military action in response to the Syrian regime’s use of chemical weapons against unarmed civilians in an attack which killed at least 1,400, the amount of misinformation and ignorance among the American populace has truly shocked me. This becomes especially clear with peace activists who have, only in recent days, dedicated themselves to what they regard as “helping the Syrian people,” unaware of the fact that their activism would have been faced with detention and torture had it been on Syrian soil.

While individuals like these often have noble intentions, their calls could not be further from what Syrians need today. As protesters call for a stand against US intervention, Syrian regime planes conduct indiscriminate strikes and kill hundreds of innocent civilians. These individuals and organizations have been markedly absent from any calls upon Assad to stop the brutality, rape, torture and killing of his people throughout the last two and a half years. While the situation is alarmingly complicated, and Al-Qaeda militants continue to hijack our uprising, detain and torture our activists, the American media and the general public continue to associate them with the Syrian people as a defense mechanism for world inaction.

The mobilizing efforts of anti-war activists have been deemed successful, as they resulted in delaying intervention for now and diminishing the chances of a strike on the regime’s strongholds. As a result, Assad, right after massacring civilians with chemical weapons, was invited to send a petition to the United Nations and the Organisation for the Prohibition of Chemical Weapons to join the Chemical Weapons Convention to disclose the country’s stockpiles in order to have them destroyed within a year. What the self-proclaimed “anti-war” activists, who saw this as a victory, did not follow up on was the use of unidentified deadly gases on another neighborhood in Damascus only a few days later. Had the effective rallying cries of those activists been used towards mobilizing humanitarian support for Syrian refugee children to continue their education, many things would have been different today.

International inaction has not worked thus far, and continued inaction will not remedy the future. In fact, inaction could lead to an escalation of violence in the region as a whole, resulting in a larger death toll among innocent unarmed civilians and a green light for dictators to use their chemical weapon stockpiles on innocent civilians to silence them. Between a powerful, internationally-backed regime and a terrorist organization, Syrians are left to fight for their freedom on their own as the international community turns a blind eye to international law and the history of genocide. Ziad Majed, a famous Lebanese democracy researcher, stated on his Facebook page, “It is not because of the Jihadists in Syria that the International Community is hesitant about intervening to end the tragedy. It is rather because of the hesitation of the International Community and the continuing Syrian tragedy that the Jihadists are seizing an ‘opportunity’ and organizing themselves in (and against) Syria.”

Today, two years later, I write this all the way from Chicago thinking of my laundry still lying there on my bed. I think of my plants, which I still imagine as alive but realistically are probably dead by now, as are many other things in Syria. I wonder about my chances of returning home. I often regret speaking out, and wonder if this revolution was ever worth it. I remember the world applauding the brave, defenseless Syrians for finally breaking the silence and standing up for themselves, protesting peacefully and chanting for dignity, a sight that no one had witnessed in their lifetimes. When those Syrians were faced with bullets, the world applauded them. They were massacred and the world condemned these atrocities, showing us a mastery of empty condemnations. Any action that has been taken has been in the form of sanctions that only kill more Syrians. As a human being, I am certain that the international community cannot continue to simply observe the indiscriminate killing of Syrians that is only bound to intensify if clear and swift condemnation does not occur.

I mourn the passing of Ali knowing that he was not the first, and he will not be the last, but I pray that the endless stories of children and young adults like him do not disappear with their deaths, but instead serve as a call to action that has become both morally and strategically necessary.

*Name changed to protect identity of the author. 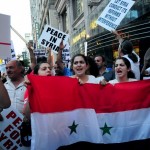