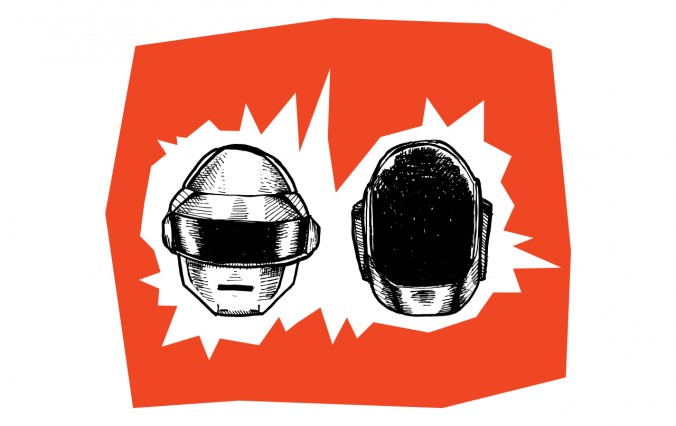 In a celebrity-obsessed world where faces make fortunes, Daft Punk, with their helmets reflecting such glassy, impenetrable depths, are famously anonymous. Their robot personas have been evolving and enchanting the masses since 2001, but the duo’s brief cameo in 2010’s “TRON: Legacy” elevated their visual branding to the realm of pop culture legend. Although by the film’s release it had already been intensely publicized that Thomas Bangalter (“the silver robot”) and Guy-Manuel de Homem-Cristo (“the gold robot”) had scored this sequel to the original 1982 film, their onscreen presence came as an Easter egg surprise. In a pivotal, tense party scene, their “faces” blend in seamlessly with the hyperstylized digital microcosm of the TRON-verse. Looking on in artfully designed light-up speed suits, they offer nothing more than what they do best: make music and ensure that the crowd is pumped.

Daft Punk’s helmets have now become international icons in their own right, so interestingly, the DJs’ presence in this onscreen fantasy world creates a link and an anchor back to the “real” world of the viewer; they are our only familiar signifiers of a well-known code. While both fitting in perfectly with their surroundings and sorely sticking out to the eye of the cultural savant, their cyborg personas allow them, as artists, to move between virtual and physical worlds, permanently residing in neither. It could be a statement on our increasing reliance on carefully constructed masks that we put on and take off, depending on the situation; a successful negotiation of our “digital” selves alongside our “analog” selves now marks our everyday interactions within both virtual and physical communities.

Identity negotiations aside, the robot guises act as a way for Daft Punk to both amplify the reach of their music and buffer the distracting effects of celebrity life. In a May 2013 Pitchfork interview, de Homem-Christo explains: “Looking at robots is not like looking at an idol … It’s not a human being, so it’s more like a mirror — the energy people send to the stage bounces back, and everyone has a good time together rather than focusing on us.” Their costumes act as physical armor to maintain the performers’ privacy (their actual faces and bodies) and keep everyone (performers and audience alike) focused on the art.

Unlike visual artists, whose works become physical “products” that are separate from their bodies, actors and musicians employ their bodies as their art. But, by utilizing costumes, Daft Punk offers a challenge to the idea that celebrity relies on a human form; they perpetuate their robot faces as visual objects interrelated to and inseparable from their music. The getups also act as symbols of the transitional field between men and music: the instruments. Robots are the intermediaries between machines and humans, technological tools that can become new instruments — transmitters for art — altogether.

As members of undeniably wired societies, we’ve finally caught up with what Daft Punk has been doing for years: shapeshifting, negotiating and negating the nature of our public faces. As artists, they have a long history of physically portraying the now culturally ingrained practice of utilizing avatars. We carefully craft and play out our social media, video game or blogosphere personas and seamlessly step into and out of hyperdigitized communities both virtual and real, relying on technological tools to act as buffers. Our digital selves have conformed to our physical selves, and vice versa, and all of the masks that we show the world have become the same guise. Perhaps that is why, at some unconscious level, the duo’s popularity continues to skyrocket out of an unassuming development: in stepping into the role of robots, they deny their audience the chance to see them as men but instead present themselves as intermediaries on a path to simply enjoying and experiencing music. By physically removing their real selves from their robot armor, by taking off the costumes at the end of the day and keeping their real faces carefully out of view, Bangalter and de Homem-Christo might be enjoying a luxury that is a new rarity: celebrity away from the public eye.

Entertainment Human After All
« Previous Story