I have a sincere respect for avid lecture-goers, who are so dedicated to expanding their minds that they voluntarily spend their free time on hard chairs, arranged in uninspiring rows in dimly lit rooms, to hear someone talk about a specific — and perhaps a little soporifically esoteric — topic for an hour. It is not the rows of chairs or dim lighting that often dissuade me from going to lectures, but the lack of a guarantee — how can I be sure that I will find interest and worth in what this person has to say?

This may sound unnecessarily harsh of me but, in a world with myriad options for acquiring information within just a few seconds, attending a comparably lengthy extra-curricular lecture becomes a risky gamble with my already limited free time.

However, I was persuaded to attend Terry Myers’ sabbatical lecture, “Painting Stays While the World Floats Away,” because of the claim that it would be “opinionated.” “That sounds lively,” I thought. I wasn’t disappointed. Not-so-freshly back from his 2012 sabbatical, Myers is a noted art critic who splits his time between Chicago and Los Angeles, and is Associate Professor of Painting and Drawing at SAIC. Detailing his experiences as he traversed Japan, Germany and the US during his time away, Myers offered observations into the state of painting today and what it meant to be an art critic, two insights I didn’t know I needed until I heard them said.

Myers’s sabbatical — or his retelling of it — began in Tokyo where he visited the National Museum of Modern Art just in time for the first ever monographic exhibition of Jackson Pollock’s work in Japan. “As many of you who know me know, I would step on a Pollock to get to a de Kooning,” Myers remarked, “but Pollock’s achievements can’t be undermined. I had to go.” 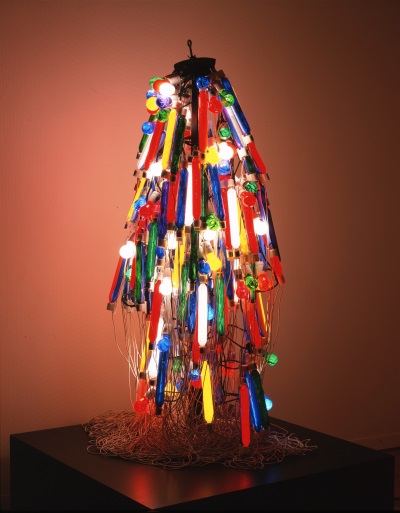 Celebrating the centenary of the artist’s birth, the retrospective included two exceptional aspects according to Myers: a meticulously accurate facsimile of Pollock’s studio that blew MoMA’s studio remake in a previous Pollock exhibition out of the water, and the work “Mural on Indian Red Ground.” Purchased by former queen and exiled empress of Iran Farah Palavi, “Mural” is one of the prized possessions of the Tehran Museum of Contemporary Art and had not left the country in over three decades prior to the Tokyo exhibition.

Shortly after viewing the Pollock show, Myers had the great fortune to visit another retrospective of ground-breaking Gutai artist Atsuko Tanaka at Tokyo’s Museum of Contemporary Art. Myers explained that Tanaka was best known for her work “Electric Dress” (1956), an all-encompassing mop of a frock made out of wires and colored lights. “It must be a museum conservator’s nightmare,” he joked.

Myers went on to explain that, while not a painting, “Electric Dress” was conceived of by the artist as a painter. Flashing an image of one of Tanaka’s paintings on the screen behind him, the relationship between the painting — which looked like a circuit board with a nest of wires — and the famed “Electric Dress” was undeniable.

It was in that simple moment that I realized how multifarious painting is, something I had never taken the time to think about before. Quoting the contemporary American artist Laura Owens later in the lecture, Myers said, “Painting does things, so why wouldn’t you take advantage of everything that it does?”

This hit home with me after my brief Tanaka epiphany. I felt like a bum student of art history and theory — why had I not thought of painting as a state of mind rather than a just a medium long before? Bells were going off in my head, neurons were moving across synaptic gaps at an alarming rate. I had learned something, really learned something. What I was hearing was changing the way I viewed painting and maybe art in general.

Meyers went on to discuss two large-scale art exhibitions (“sprawling things” he called them) that he visited during his sabbatical: Made in L.A. in Los Angeles and Documenta 13 in Germany. While he remarked on the limited or lackluster representation of painting in both instances, he seemed relieved that painting was included at all. “In international biennials, painting has disappeared… curators are afraid of it! But that’s starting to change.”

“At Documenta, I learned that tapestries are back,” Myers wittingly said. “That just shows that no medium is ever dead … As a teacher here [at SAIC], I teach younger and younger students every year. I’ve noticed recently that they are unburdened compared to painters of my generation who have been beaten and ravaged by modernism.” At Made, painting also made a comeback through the works of Brian Sharp, Alex Olson, Meleko Mokgosi, Allison Miller and Zach Harris.

“These things are cyclical. Painting is radical again.”

As the lecture came to a close, I flipped back to my first page of notes to star something I had jotted down at the very start. Myers had introduced his lecture with a few remarks on his work as an art critic. “The older I get, the less academic I become. I am an art critic … I look at art, try to figure out what to say about it, and I say it as clearly as possible.”

“One of the reasons I like being an art critic is that you get to be wrong.” By the end of my hour in a hard plastic chair in a dimly lit room, I had indeed realized that I had been wrong. Wrong about painting. Wrong about lectures.