A few dancers writhe in an empty parking lot next to an abandoned bank, the former TCF at 1050 West Wilson Avenue. The air is thick with conversation rather than music as the dancers are isolated in their reverie, listening to headphones that receive a radio transmission of tunes. The black fence surrounding the lot is cordoned with yellow police tape, reading “Lovely”, a project by sculptor Stephanie Brooks. 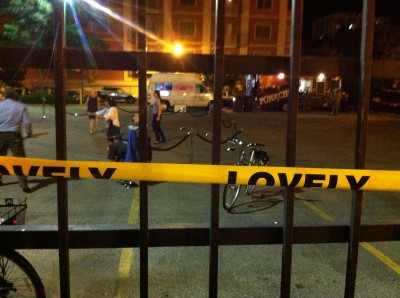 The parking lot of 1050 West Wilson Avenue on the opening night of Chicago Artist Month and The American Dream: The W(h)oly Grail.

Anyone can join in the display, but its only early evening and most folks are reticent to get down. This is the silent disco “Dance with me…” by artist Meg Duguid, an outdoor element to the opening night of Chicago Artists Month, and a part of the The American Dream: The W(h)oly Grail. Beside the entrance to the gutted former financial edifice there are a few hand painted plastic chairs that read “People will sit where there’s a place to sit.” Indeed, there are a few people who take a seat to continue their conversation in repose.

The walls of the grand stone foyer are hung with images of exploded disco balls printed with glitter on felt. On the main floor, there are several small portable partitions hung with the work of individual artists. Many of the works reflect on boundaries within the city of Chicago. Erol Scott Harris’s composited image of every house (18 in total) that he has lived in Chicago is evocative of the specific layout of Chicago neighborhoods and houses, with their porches, alignment of trees at the corners and peaked roofs. The overlaid photographs allud to a transitory family life, while the many wide windows suggests the possibility of many previous viewpoints.

Phil Peters’ documentation of his Buck’n Rail project reveals how Chicagoans interacted with the Wyoming style buck’n rail fence that he placed onto the beachfront of lake Michigan. Over a month, the community relocated the fence, creating different alignments in relation to the waterfront, even bringing it in and out of the tide.

At 9 o’clock a party gathers in the parking lot beside the dancers to take part in The Kurumato Model. Participants each acquire a specially programmed bike light from artist David Reuter. The group embarks on a lakeside ride, where as their bicycles approach each other, the lights flash in sync, echoing the behavior of fireflies.

Inside musicians begin to assemble between the walls of images. A trombone, a cello, and a guitarist sound from the edges of the room. A man hands out mysterious instructions to the musicians. In the center of the cavernous room, beneath the apex of the vaunted ceiling, the piano that had been reserved for spontaneous public playing is now taken over by a participant in Julia Miller’s Dissecting Adam. The improvised opera portrays a 111 year old woman’s life through her relationship to others. On the opening night, the audience witnessed only one scene, but the full opera will return to the resonant bank on October 26th.

Around the World in Photos 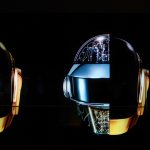