Chicago’s diverse and active art community ensures a rich spectrum of projects and shows, but it can be a Darwinian fight for recognition. F Newsmagazine spoke with the co-founders of an online platform that facilitates written criticism to serve under-recognized Chicago arts venues.

Chicago’s diverse and active art community ensures that a substantial number of projects and shows come to fruition, but a great number of such events are lost on the public simply because of the sheer volume of the scene. Unfortunately, the Darwinian fight for cultural recognition and critical legitimacy consistently tends to marginalize independent, alternative and artist-run spaces due to the lack of systemic support for such venues to flourish within their limited means and with their distinct ideals. Any assertion regarding the gap of criticism in relation to the sheer number of independent art happenings occurring within the city is further complicated by the quantity and quality of the various platforms that support opportunities for criticism of such shows. There are few stages that provide the means from which accessible and creative critical writing can be disseminated to the broader public.

Fortunately, two artists have taken this problem to task. Jason Lazarus and Sofia Leiby are the co-founders of Chicago Artist Writers (CAW), an online platform that facilitates the creation of experimental and traditional written criticism to serve under­-recognized arts venues in the city. F Newsmagazine spoke with Jason and Sofia concerning the particularities of their project and its broader implications for arts communities everywhere. 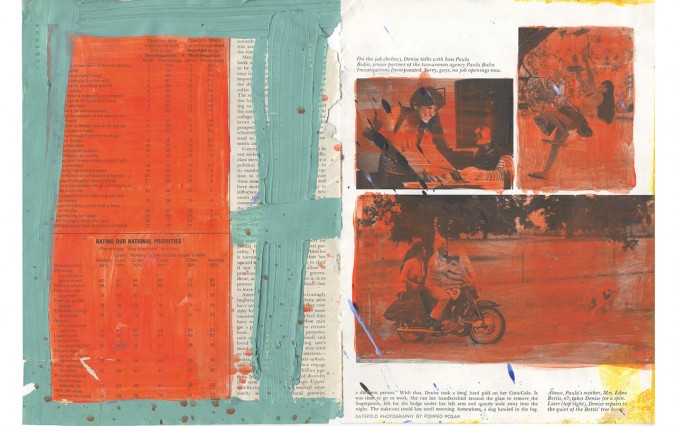 Annette LePique: Could you describe the structure of CAW?

Jason Lazarus and Sofia Leiby: CAW is an online platform for critical writing about exhibitions at alternative and independent art spaces in Chicago that typically do not often receive published feedback on their cultural output. We solicit individual writers and maintain an open submission policy with rolling deadlines. Reviews are then submitted to us, or to guest editors that we ask to donate two weeks or so of their time to editing reviews. Editors assess the review based on their subjective criteria and go through rounds of editing with the writer, and then we post the final draft on the site. Four times a year we invite cultural producers working in the field of criticism to host hands-on workshops that are open to the public by RSVP.

JL & SL: CAW is open submission, but we encourage studio art students in BFA and MFA programs, people who may not have formal experience in writing criticism, or people who may not consider themselves primarily as writers to submit. Any submissions that don’t meet these general requirements are assessed on a case-by-case basis.

AL: How are guest editors chosen and paired with contributors?

JL & SL: For guest editorships, we approach more established artists and writers who we think would be responsive to our mission, those who have undertaken roles that are community-driven and pedagogical in nature. During a guest editorship, reviews come in sometimes with or without warning — we ask writers to pitch reviews at their own discretion.

One of the great benefits of this model is that writers are sometimes paired with editors that they don’t have a pre-existing relationship with, which hopefully may lead to conversations beyond the scope of our project. Last year, Josh Reames submitted a review during Brandon Alvendia’s term as guest editor. The review, which was of an exhibition at LVL3 Gallery in Wicker Park, consisted of a “recipe for contemporary sculpture.” As guest editor, Brandon converted the review into a downloadable ebook and appended “editor’s notes” to many portions of the review that alternately agreed with or combated against Josh’s views. In the future, we are considering a supplementary program where we intermittently ask guest artists/thinkers to curate a critical framework for a few weeks and reach out to younger artists in their network to write reviews that, when published together, build up a larger discourse with a rotating focus. This program would run parallel to our default open call for submissions.

AL: How does CAW’s platform allow for writers to contextualize their thoughts within the broad schema of Chicago art criticism while remaining a unique model within the Chicago arts community?

JL & SL: Often, the average submission already elaborates on a handful of questionable or successful aspects of a show, and from there, the editor undertakes the role of finding gaps or unsubstantiated claims in the writing. We are the last check in this process if a guest editor is involved in a particular review. CAW is also unique in that it provides a platform for experimental criticism, which is surprisingly underutilized. Chicago’s outlets for criticism, such as F Newsmagazine, The Chicago Tribune, Newcity, and Bad at Sports to name a few, each have specific audiences, contributors and limitations; we aim to act as a corollary to and collaboration with these institutions in an effort to expand the field. Self-publishing allows for a certain amount of recognition, but we hope that as CAW grows it becomes a destination alongside established outlets for reliable and thoughtful criticism.

Our quarterly workshops, which feature a practicing professional capable of unpacking criticism as a form, practice and philosophical conceit, each aim to enable aspirational writers to dimensionalize their notions and practice of writing. The varying points of view represented by the workshop series provide an opportunity for participation in a significant ongoing conversation on what critical coverage is and can be, both now and in the future.