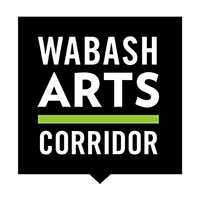 Columbia College Galleries kicked off EXPO weekend with its Wabash Arts Corridor Crawl (WAC) last Wednesday. Unlike most neighborhood “crawls,” this event didn’t involve hopping from pub to pub. Instead, students and the public were invited to leisurely make their way through Columbia’s affiliated galleries and exhibitions sponsored by partner schools. A selection of participating local businesses also ensured visitors could score a good drink special after it all.

A complimentary trolley service escorted guests through several blocks of events and activities, completing this bar crawl simulation. However, guests were much more likely to utilize its services to escape the pouring rain that endangered the event’s success. The rolling thunderstorms competed with the ambitious sprawl of the WAC; guests were drenched just from crossing the street to travel to a new location, leaving more remote attractions left out to dry.

The Fashion Studies Launch was awash with innovative designs and an army of wet umbrellas. During the Beats and Greets demonstration of student work from Columbia’s Club DJ classes, even the room-shaking rhythms of DJ K-LOCK3 couldn’t drown out the sound of the thunder.

Despite the rain, the WAC Crawl still managed to garner decently sized crowds of an encouraging mix of students and the public. Features for the night included free access to Joffrey Ballet dress rehearsals of classic works by Russian masters and Dance at the Crawl!, which featured Columbia student performances of West African dance. Events ranged from the conventional, including gallery viewings and musical performances, to the delightfully unconventional, featuring a button-making workshop and a hula hooping demonstration showcasing the performer’s expert hoop dance skills.

In total the Crawl featured forty events held exclusively in Columbia buildings with supplemental activities at partner schools and businesses. Almost every event featured a reception with complimentary food and drink; lucky early bird visitors were rewarded with San Pellegrino and mini-cupcakes.

Greater community engagement was an underlying theme for this year’s WAC Crawl. After running through several high-energy choreographed numbers, the student performers at Dance at the Crawl! roamed the audience, dragging people onstage to join the improv fun.

Spiegel, who has observed past Crawls during his four years at the school, noted that the event’s planning committee promoted this year’s event much more aggressively than in the past. Outside collaborations, such as the Joffrey rehearsal viewings, are also a recent addition to the event. “This year they wanted more of the city’s broader art scene to be incorporated,” explained Spiegel, “if this is meant to be our version of ‘homecoming’ then it’s a great one.” 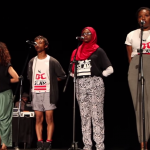 Word on The Street vs. Discourse in the Ivory...