The violins whined into action, the bass putted and thumped, and the small guitar marched diffidently, punctuated by the trumpets.

Last night after finishing the long production weekend at F, I wanted an easy dinner.  So I walked up to my local taqueria in Logan Square to grab a quick bite. The deliveryman pushed past the candy dispensers and karaoke booth with 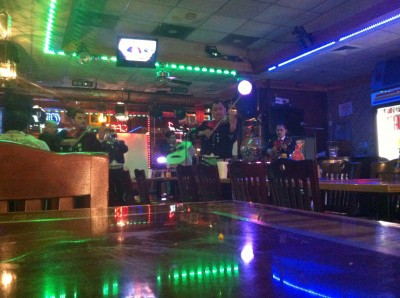 San Marcos Mariachi playing up at El Rachito Taqueria on a Sunday evening.

a stack of steamy boxes as we entered El Ranchito. An eager waitress approached to hand us menus. She returned several times within the first few minutes of our arrival.  “Are you ready?  Do you know what you want?”  I was glancing at the menu trying to decide between tacos, huararches, tortas, and gorditas, considering the important factor of what came with free avocados.  The Italian menu at the back just seemed out of place. Signs on the wall advertised ten dollars for five Coronas or Modellos. Couples and young men were slouched around the short diner-style bar taking their time on cocktails and beers beneath the green and amber lights. I ordered two veggie gorditas and my dinner guest got the taco dinner to go.  As I paid the modest $15 for dinner for two, I noticed a man with golden botonadura gilding his trouser legs tuning a large bodied guitar, a vihuela.  Two violinists, two trumpet players, and a guitarrón player began to arrange themselves amongst the sparsely populated tables at the front of the restaurant.  “We’ll eat here, actually!” I informed our hostess and we took a seat next to a person-sized cake display case.  One of the violinists, a man in his mid-fifties whose expression varied from that of a wide grin and soulful pout, placed a foam cup on the central table of the restaurant.

He began filling it with hot sauce… and another liquid must have been in there, but it was unknown to me.  The violins whined into action, the bass putted and thumped, and the small guitar marched diffidently, occasionally punctuated by the trumpets.  The strings and horns called back and forth to each other.  The younger violinist sauntered down the aisle between tables, occasionally stamping his feet and gyrating his violin behind the waitress when she came to collect empty glasses.  Between numbers, a man sat in the karaoke booth announced the name of the songs and reiterated the title of our entertainers, The Mariachi San Marcos.  The cheeky joker of a string player leaned over to friendly entrepreneur of the group, one of the trumpet players and whispered beneath his fluttering mustache.  The whole group moved up to the back of the restaurant and surrounded a man sleeping in his chair over a half finished beer.  His eyes blinked opened to the grandly dressed ensemble singing him an awakening chorus.  He rolled his shoulders side to side joined in for a few lines, sipped his beer and then lolled his head back towards his chest as the band retreated.  The trumpet player added a refrain of “Rock a Bye Baby” with a Mariachi inflection as they took up their posts at the front again.

Needless to say I recommend Taqueria El Ranchito on North Milwaukee for a large, lively and cheap meal on a Sunday night.­­­ 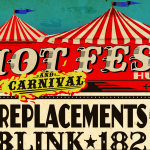 3-Day Punk Party and A Make Out Booth