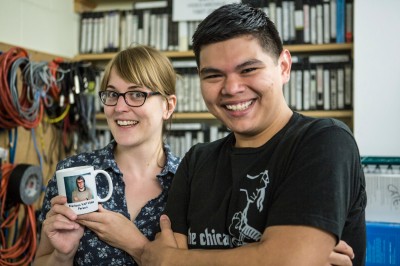 With the busy fall semester well underway, SAIC has welcomed back alum Exal Iraheta (BFA 2009) as Student Media Manager and Advisor. Iraheta humbly describes his new role as “a go-to position for students who have questions about rendering or editing, or equipment.” He will supervise operations for ExTV and Free Radio SAIC as well as organize Media Center authorizations and workshops. He brings his experience as a digital media artist and past experiences with the LEGO Group and the Museum of Contemporary Art (MCA) and hopes to expand the network of SAIC’s media outlets and resources.

As an undergraduate in the Film, Video and New Media Department, Iraheta worked for ExTV as station manager and was part of the ExTV and Free Radio re-launch team at that time. Working under his predecessor, Lori Felker, taught him the ropes for his new role. “I took whatever knowledge I could from her, as a student … I’m just trying to fill her shoes.” His past involvement with the programs that he now leads brings him reassurance; in terms of content and direction, he explains, “I know where we’re coming from.”

Iraheta’s position includes a new set of responsibilities in addition to advising students involved in Free Radio and ExTV: overseeing Media Center authorizations and training schedules. He will also be organizing workshops for anyone needing equipment authorizations and will schedule and hire student workers at the Center. His goal is to emphasize and communicate to students that many resources are available for them to use.

As for ExTV and Free Radio, Iraheta’s main concern is to increase exposure in order to attract more viewers and listeners. “Expanding [the outlets] from the SAIC community to the Chicago community is definitely in our goals,” he says.  He believes that pursuing more exposure outside of SAIC will help students, be they artists, curators or programmers, gain experience. A few ideas to do so include making ExFEST a traveling show around Chicago, collaborating with more local galleries and theaters, working with Chicago Public Radio, and encouraging student DJs to pursue other opportunities. Other thoughts include a tutorial on using Google Analytics to manage website visitors and chances for students to produce and exhibit content online.

But before all of that, there are other priorities. “Right now, my focus is on making sure ExFEST is properly launched,” Iraheta says. This show will be the first major project for ExTV that he will be working on.

After graduating in 2009, Iraheta took his focus on tech, software and writing to the greater world. He created a YouTube channel that started with video blogs and gradually incorporated sketches into video, allowing him to get in touch with international artists. This virtual network eventually provided occasions for Iraheta to travel and meet with other artists, solidifying the importance of exposure and networks for him and his work.

While freelancing and working on these online projects, Iraheta came across an opportunity to work for the LEGO store in downtown Chicago as a full time manager. This position initially had no technological responsibilities, but primarily involved organizing, scheduling and working with young adults. He notes, “[That experience] translates to [my role at SAIC] a lot too, because I’m working with college students.”

This past summer, Iraheta worked for a few months with the MCA as a production assistant and found that experience to be quite involved. In addition to assisting with digital archiving and editing, he worked on exhibits including “Modern Cartoonist: The Art of Daniel Clowes” and helped arrange coverage for Amanda Ross-Ho’s “THE CHARACTER AND SHAPE OF ILLUMINATED THINGS.” He was frequently in contact with artists’ managers. “It taught me a lot about how to manage art and business,” he says, “because there’s a lot of that conversation going on in museums.”

His background with both LEGO and the MCA provides skills that Iraheta will bring to his new role at SAIC. He praised Felker for her prominent role and enthusiasm in working with the students. “She did a lot for… Free Radio and ExTV, and she also did campus advising for AV equipment.” Felker’s office was always open for anyone who had questions or needed help, and he intends to do the same. “I want to keep the same mentality and philosophy about that…[while] giving everyone as much power as they can.”