The second season of the polarizing HBO show Girls kicked off Sunday, right around the time when its creator, star, writer, and occasional director, Lena Dunham, was being awarded two Golden Globes, one for Best Actress and the other for Best Comedy or Musical Television Series, at the ceremony in Los Angeles. “Making this show and the response to it has been the most validating thing that I’ve ever felt; it’s made me feel so much less alone in this world,” Dunham said in one of her acceptance speeches.

Amidst the praise and validation, the first season was highly scrutinized — the main criticism being the lack of diversity  it presented on screen. But Dunham wastes no time in the second season’s first episode: one of the first scenes features a very naked Hannah (played by Dunham) atop a very black Sandy (played by comedian and rapper Donald Glover), as her temporary Republican fling who lends her a copy of Ayn Rand’s The Fountainhead. The character’s race is not really an issue in the storyline — he’s cute, they have a lot of sex— but Dunham did acknowledge in an interview with New York Magazine that her inclusion of Glover was very conscious, a way to engage in a conversation with her audience that had made demands she was definitely made aware of. The Atlantic‘s Ta-Nehisi Coates writes he’s never met a black Republican in New York, but it’s clear Dunham is getting a kick out of playing with viewer’s expectations.
I don’t think Hannah and her posse of affluent friends will all of a sudden be seen hanging out with, say, a group of Dominicans in Washington Heights, but it will be interesting to see where Dunham and her writers take the series, and if the authenticity of Dunham’s voice will remain unscathed by all the criticism. A recent profile of Dunham’s mother, the artist Laurie Simmons, in the New Yorker casually revealed that this season will have Marnie (played by Allison Williams) wrestling her way through the New York art scene, and Simmons will be playing an art world character. In Sunday’s episode, Marnie was let go from the gallery she was working at. The flighty gallery owner casually reveals that she had slept with the other, less adept, assistant so it was Marnie who had to be let go.
Racial intermingling? Art world caricatures? That makes for great TV. I’ll be watching and reporting.
Like 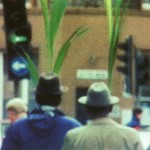 Through the Eye of an Auteur