Hannah is really bad at talking about U.S. race relations. Also, she does not read newspapers

Hannah Horvath was wearing ‘shorteralls’ in this week’s episode of Girls, titled “I Get Ideas.” She wore them to visit Jessa and her flighty, suspicious new husband who, somewhat mockingly, compliments Hannah on her unique style choice. She also wore them to visit Sandy (Donald Glover) at his apartment, for what was supposed to be an evening of pleasure.

But mid-foreplay came the episode’s high point, which revealed Hannah’s near-sighted opinions on race and her selfish ways. When Sandy tells Hannah he wasn’t really into the short story she had shared with him, a quick-witted dialogue between both characters ensues. She says it’s good he’s not into her story, because then they can have open dialogues about things they don’t see eye-to-eye on, like his political beliefs. Sandy says there is nothing to discuss, though, he’s a steadfast Republican. But Hannah rebuttals, drops a Missy Elliot lyric mid-sentence (unknowingly, although I think she was bluffing) and then lectures Sandy on how bad minorities have it in the U.S. He thanks her, sarcastically, and the relationship quickly crumbles.

When Hannah tells Sandy, during this exchange, that she hadn’t noticed he was black until just that moment,  I think she’s trying to drive home what she genuinely believes — that she doesn’t live in his Republican world, where there are stark divisions of class, gender and race. Remember, she is the daughter of liberal college professors. But the delivery of her lines is offensive to Sandy and he asks her to leave. This scene helps to highlight one of the show’s themes: that of Hannah’s selfishness. Jessa’s mentioning of the Glass-Steagalll act and the Clinton administration confounds her (“Just read one newspaper, Hannah,” her friend suggests) and her attempt to parse through Sandy’s political beliefs ends up offending him, because she has no experience in addressing these larger points, which at least we know she is aware of. Even Marnie (Allison Williams) and gay ex-boyfriend Elijah (Andrew Rannell) don’t want to let her know of their erotic encounter in the previous episode because they say she’ll make it all about herself. Wait, twenty-somethings are really self-involved? Of course they are, and Dunham (at a meager 26) knows this and has found ways of exploring this downfall hilariously on her show.

In other news, Marnie gets rejected from the art world by the gallery owner (played by Dunham’s mother, artist Laurie Simmons, as previously reported) who tells Marnie she doesn’t quite fit the mold purportedly because she gets her suits at Ann Taylor. The sage Jessa gets three new puppies and Shoshanna appears to be in higher spirits now that her prospects with the poetic Ray are looking bright. Also, Hannah manages to have heartbroken Adam taken away from her apartment by the police.

More ideas to come, next week. 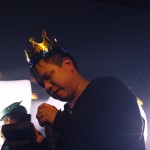