What am I listening to?

Spring is here – the birds are chirping, the sun is shining and you can tell who the tourists are by who’s still wearing gloves and North Face coats. But as the tulip bulbs start breaking through cold soil, I often find myself staring outside at the lake shore and wondering if this is the same place where cars were stranded in the huge snow dunes of last year’s blizzard, or if those wimpy 15-minute squalls were the “worst winter in years,” as the papers heralded in late autumn. So here’s the backlash: 12 tracks from the stranger side of music to contest with the pleasant (but ultimately boring) weather that brings Segway-mounted sightseeing to the sidewalks of Michigan Avenue. We’re not sadists here at F Newsmagazine (most of the time) so these are still somewhat palatable selections, but rest assured, they’ll still twist your ears more than a bit.

“I Wanna Be A Bear” by Descendents
from Milo Goes to College (1982)
I haven’t done any real research on this (like some sort of journalist or something), but I’m willing to bet that there isn’t another song out there that’s both under one minute long and as absurdly misogynistic as this Descendents tune. In that tiny window of time, the band manages to cover: A) the manipulative nature of women; and B) the simplicity of life as a bear. An example from item B: “I want to shit in the woods, in my cave.” Poetry.

“Judges” by Colin Stetson
from New History Warfare, Vol. 2: Judges (2011)
If you know Colin Stetson for anything, it’s probably for the horn he plays, a bass saxophone, which is nearly as tall as he is. Listening to “Judges,” though, appearances are the least important thing – Stetson employs circular breathing to keep the drone alive, occasionally vocalizing through the reed, while feeding clicks and squawks to multiple microphones to keep the rhythm. All in real time.

“Autobahn” by Señor Coconut
from El Baile Alemán (2000)
Everything Señor Coconut touches turns to Latin gold, which is strange because he’s actually from Frankfurt. Regardless you would never know this fact from the joyous Latin American sound he culls from behind the steely thud of the Kraftwerk original. This is one of those songs that appears somewhere between William Shatner’s “Rocket Man” and the Ukulele Orchestra of Great Britain’s “Anarchy in the UK” in a playlist called “wtf?”.

“(Something)” by The Microphones
from The Glow, Pt. 2 (2001)
This track starts and ends with the bleat of a distant fog horn, and in between those warm beacons of tone lie some of the most articulate feedback patterns known to man. Listening to this track is like sitting on the beach at midnight while a lovable killer robot passes by.

“Disengaged” by Grouper
from Dragging a Dead Deer Up a Hill (2008)
I’ve had this and more of Grouper’s albums in my music library with plenty of plays for quite a while now, but I wouldn’t be able to describe a single one of the rest of their songs to you. It’s no coincidence that this is the first song on “Dragging” – as soon as this song hits its stride as a nebulous nursery rhyme, my eyes glaze over and I suddenly want to curl up and drift off to sleep.

“Squeeze Me Macaroni” by Mr. Bungle
from Mr. Bungle (1991)
Mr. Bungle is the Red Hot Chili Peppers precedent you’ve never heard of. Blending elements of funk, metal and rap, “Squeeze Me Macaroni” throbs with perverse sexual impulses fueled by speedballs and bolstered by the voices in your head. It’s the soundtrack to the mid-1990s Lollapalooza freakshow you were too afraid to attend.

“Chez Yves (Alice et Clara)” by Sonic Youth
from Simon Werner a disparu (2010)
One of the more popular theories about today’s “culture of nostalgia” is that it’s eating itself slowly and steadily. Here to prove that theory is Sonic Youth. The strangeness comes in when you realize this is from a soundtrack for a movie set in 1992, and that Sonic Youth is attempting to emulate themselves at around that time – it yields something that sounds pretty good but also feels like they’re cheating off their own tests.

“Boots” by The Residents
from Meet the Residents (1974)
You want subversion? You want irreverence? You want some really weird shit? Well, that – all of it – is the Residents’ specialty, and no one was doing it remotely as well at the time. In 1974, the Kool & the Gang couldn’t stop jungle boogie-ing, Barbara Streisand fondly remembered the way we were, and the Residents defaced a Beatles album cover while butchering a Nancy Sinatra song.

“Epochs” by The Knife / Planningtorock / Mt. Sims
from Tomorrow in a Year (2010)
Traditionally, electronic music’s beats have been limited to venues that either have dance floors or couches, but the Knife and their collaborators have created a new place for buzzes and blips: the opera. “Epochs,” is the first proper number in the sprawling epic based on Charles Darwin’s 1859 work “On the Origin of Species,” though I doubt its accuracy since Darwin probably had a very limited arsenal of synthesizers.

“Bat Chain Puller” by Captain Beefheart and the Magic Band
from Shiny Beast (Bat Chain Puller) (1978)
Captain Beefheart was a manipulative asshole, but sure did know how to fit a round peg into a square hole. This late-period tune has a strong machine-like rhythm (perfect for the man who ran his band like a submissive cult) and the usual half-brained snarl (fitting for anyone who’s claimed to have only half a day of kindergarten under his belt).

“No More Hot Dogs” by Hasil Adkins
from Out to Hunch (1986)
Certified backwoods madman Hasil Adkins shows us just the kind of charm he’s known for in this track, which is part rollicking rockabilly barn burner, part homicidal threat, part ode to a classic American food and part maniacal laughter.

“You Suffer” by Napalm Death
from Scum (1987)
Blazing fast and to-the-point, “You Suffer” is five seconds of pure grindcore crunch. Plus I can fit all the lyrics of the song in this blurb and still meet a 50-word limit: “You suffer / But why?” And done. (With seven words to spare.)

Listen to this month’s playlist on spotify
Don’t have spotify? Get the free app here. 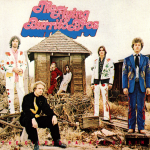 The Flying Burrito Brothers – The Gilded Palace of...