FASHION 2010 was an incredible runway extravaganza, comprised of a series of shows featuring looks from SAIC students, iconic couturiers, and one of the industry’s most influential new designers.

By Amanda Aldinger May 10, 2010 Uncategorized

A day of fashion in the Art Institute’s Modern Wing

Text and photos by Amanda Aldinger

On Friday May 7, SAIC’s Fashion Department hosted their 76th annual fashion show, FASHION 2010, showcased in the Art Institute Chicago’s (AIC) Griffin Court in the new Modern Wing. After a 15-year hiatus since its last appearance at the Museum. FASHION 2010 was an incredible runway extravaganza, comprised of a series of shows featuring looks from SAIC students, iconic couturiers, and one of the industry’s most influential new designers.

At 2 p.m., the event began with a tribute to Eunice W. Johnson, the late producer and director of the Ebony Fashion Fair—the world’s largest traveling fashion show. Johnson was historically influential in garnering support for African Americans in the fashion industry. In addition to a short video, eight gorgeous selections from the Ebony Fashion Fair collection walked the runway, including a beautiful Pierre Cardin sequined column gown with a taffeta cape that transformed shapes as it went down the runway, and a glamorous cream Valentino gown with an elongated fur-capped stole. In addition to gowns by Christian Dior, Nina Ricci and Bob Mackie, this extravagant, playful selection of looks set the tone for an exciting event.

Once the Ebony Fashion Fair collection was shown, the show moved onto the student works. Beginning with the sophomores—who each designed one look in black and white, with the addition of one pre-determined accent color (this year it was gray)—the show progressed to the juniors and seniors, who each showed 3 and 5 looks, respectively.

SAIC’s Fashion Department is known for its high-concept, avant-garde approach to fashion. Unlike the wearable ease of commercialized ready-to-wear, SAIC students are encouraged to challenge boundaries in construction, story-telling, and fashion as it relates to the human body.

The sophomore looks were unbelievable in their experimentation with shape and technique. Standout garments included Pirada Muadsong’s white and gray cotton top and skirt, which were fashioned from a variety of geometric folding and pleating techniques, and inspired by “Loy-Krathong day, a full moon festival in Thailand.” Another unique exploration of geometry was apparent in Maggie Thoms’s look, which was “inspired by the Bauhaus movement, specifically the Triadic Ballet.” A white and grayscale cotton triangle placed atop a circle-shaped skirt, Thoms’s look employed enthusiastic and unique combinations of shape and form.

The only restriction for juniors was that they had to produce 3 looks. Yet designers like Bonnie Alayne, who designed three wedding gowns, were up to the challenge. Alayne’s explosion of lace, corseting, chiffon, veil work, and crystallization was stunning in its execution. Draping beautifully and gliding down the runway with utmost elegance, Alayne’s stylistic articulation of the young, hopeful bride was moving. Julia Covintree’s Technicolor evoking collection explored “malignant neoplasm, a disease in which cells uncontrollably grow, divide, and invade the human body.” Manifesting itself in bulbous appliqués reminiscent of overgrown tumors, Covintree’s collection showcased her incredible technical skills, exhibiting beautiful knitwear, detailed fabric dying, and exquisite scalloped pleating.

On the whole, the seniors’ collections were phenomenal, exhibiting a vast array of points-of-view and technical maneuvers that made for a thrilling visual treat. Robert Nygren’s collection, inspired by the idea of “looking at the adult world through childish eyes and imagination,” was deeply poignant in its hopeful, unassuming innocence. Playing with layering and palate of mixed patterns, Nygren’s looks were were touching and genuine, showcasing the necessity of clothing from a distinct and youthful aesthetic approach. Luis A. Rodriquez’s collection, “inspired by gender dysphoria,” was a strong testament to the relationship between clothing and self. Comprised of unisex looks encased in dark tones, Rodriquez’s models all wore matching wigs and facemasks, illuminating gender confusion and spotlighting it through clothing.

The top student looks were shown at NIGHT WALK, a late-night fashion party that also featured looks from SAIC Legend of Fashion honoree Gary Graham, who was recently a CFDA/Vogue Fashion Fund finalist – an award which honors influential new designers. An SAIC alum, Graham showed 10 looks from his most recent fall collection, which debuted this past season at New York Fashion Week. A prestigious honor by all accounts, NIGHT WALK was an exciting, youthful event; the perfect cap to a day filled with innovative fashion and emerging creativity.

A success by all accounts, FASHION 2010 not only reinforced the School’s commitment to explorative art, but showcased the talent of emerging designers who show strength in both point-of-view and technical skill. The Midwest may not be fashion’s most prolific stomping ground, but on Friday, SAIC’s inspiring group of fashion designers proved that innovation and creativity go far beyond the bounds of regionalism. Next year’s fashion show, honoring famed boutique owner (and Michelle Obama’s local stylist of choice) Ikram Goldman, will not be one to miss.

Don’t Let the Numbers Get You Down 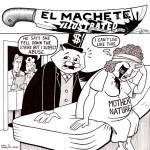 One Response to SAIC’S Fashion 2010