Andy Slater and Kendra “Call Me on the Allophone” Calhoun

By Brandon Kosters
Illustrations by Luke Armitstead and Elliott Beazley

A monthly look at members of the SAIC community whose creative impulses propel them towards producing sound and imagery. If you or someone you care about is an audiophile, write to [email protected]ail.com to tell us about it. 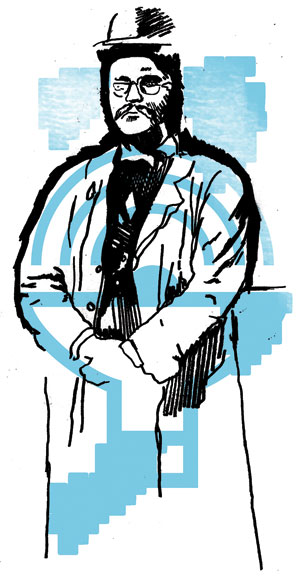 “Being legally blind, I draw on my lack of vision to create audio spaces and environments that I can’t see,” Andy Slater said in a recent interview with F Newsmagazine.

Slater has recently returned to SAIC after a ten-year absence; he originally studied in the sound department at SAIC from 1995-2000.

In his time away from school Slater has been performing “all over the place” with different rock bands. Slater said that he has played “everywhere from gallery spaces to larger clubs.”

Slater describes his band The Velcro Lewis Group as “psychedelic R&B … that is rhythmic and heavy.” For this project, Slater sings and plays his “Didley Bow,” which is a self-made instrument made of wood with a single string. “I play it with a slide, finger-picks, violin bow, and a hammer to hit it.” This summer The Velcro Lewis Group will be touring the East Coast, and releasing a full-length album titled “White Magick Summer.”

From 1994-1997, Slater performed with The Sinewaves as a live band. However, all of the musicians he worked with previously have relocated, so he now composes and records as The Sinewaves by himself. Currently, he is piecing together a live ensemble that will perform shows in the fall.

For The Sinewaves, Slater plays analog synthesizers and hacked electronics. He has modified numerous Casio samplers, toy instruments, and other electronic games and devices that have become technologically obsolete (such as a Texas Instruments Speak and Read device).

SAIC alum Frank Pollard has recently started collaborating on The Sinewaves project, and Slater is in the process of scoring and composing soundtracks for Pollard’s video work.

After working with different rock bands over the years outside of SAIC, having artistic autonomy again is something Slater enjoys. “Because my goal with sound recording is to create something personal to me,” Slater said, “it’s only suiting that I work by myself.”

This isn’t to say that parts of the experience here haven’t also been frustrating. “Being the only blind person in the school, faculty and students included, it’s been a struggle,” Slater said. “Having to be my own advocate and work on my own is basically the equivalent of taking another course. It’s taken up more time than my homework.”

You can catch The Velcro Lewis Group in Chicago May 10 at the Whistler, May 15 at Quenchers, and June 4 at Bottom Lounge. And, be sure to tune in to Slater’s radio show “The Dad Show” every Tuesday from 12:30 p.m., to 3:00 p.m., on freeradiosaic.org. 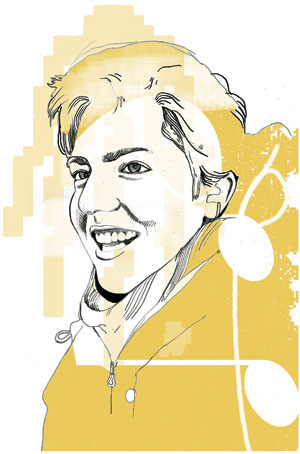 Kendra “Call Me on the Allophone” Calhoun

Brandon Kosters: What bands are you in?
Kendra Calhoun: Call Me on the Allophone; Names Divine; Manhattan Raid (with alum Jillian Musielak); RRRAINBOW FAMADNESS CURANDERAS.

BK: Summarize your practice in two sentences.
KC: My practice is filthy and self-aware. And ecstatic.

BK: What instruments do you play? Have you built any instruments?
KC: I play guitar and sing and write songs. I am working on a tape guitar in my Instrument Construction class with Eric Leonardson. I have built a series of allophones, which I am constantly rebuilding.

BK: What do you mean by “allophone?”
KC: I mean variations of phonemes as in phonetics and how the same thing can be said in an infinite variety of ways. Also, I think allophone implies a universal communication device through sound. An “allophone” kind of sounds like an instrument, but its not, its just a variant of a phoneme, but it could be an instrument, and I mean, language and the infinite ways people communicate is instrumental and musical. You know, everything is the same.

BK: For you, what connects your music to your visual art? And, what is the difference between producing a piece of visual work and producing a sonic piece?
KC: I produce more sonic work than anything else because it’s the most fun for me. All of my audio, visual, audio/visual, and literary work uses the same intuitive decision making process I’ve developed over time by studying various media and becoming aware of the sameness of everything. This understanding is reflected in the rhythm and clarity of my productions.
The major difference among the different types of work I produce is the time it takes to produce them. It takes me significantly longer to finish anything using words because my word-work is obsessed with intention. It is hard to select the most appropriate preposition for every sentence and then express 20 different ideas with a single concision that can be understood instantly. Typically my left, more non-conscious brain is most articulate, so I produce non-word works much faster.

BK: How has attending SAIC informed your practice?
KC: It has helped me develop a unique style — what ARTHI 1011 with Professor Daniel Quiles calls a “mark.” The freedom to study a variety of media develops an understanding of everything’s sameness and this has led to an ecstatic art-making experience. Thank you!

BK: Tell me about your experiences playing music prior to coming here?
KC: Before attending SAIC I thought my experience playing music was, and would be, something I could do that could be listened to. Now I don’t know what playing music is or means.

BK: With the music, what is the ultimate goal for you?
KC: Potato Rock.

BK: And, are there places where you perform regularly?
KC: Yes, I like to do the open mic at Quenchers on Monday nights. 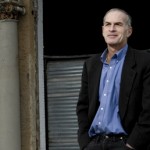 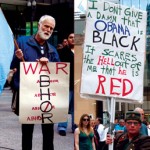