The controversial scholar and author who swore he’d never return to Chicago, was back in town on Friday, April 16th, focusing on the issue of Gaza as a human rights violation.

Fighting His Own Battles 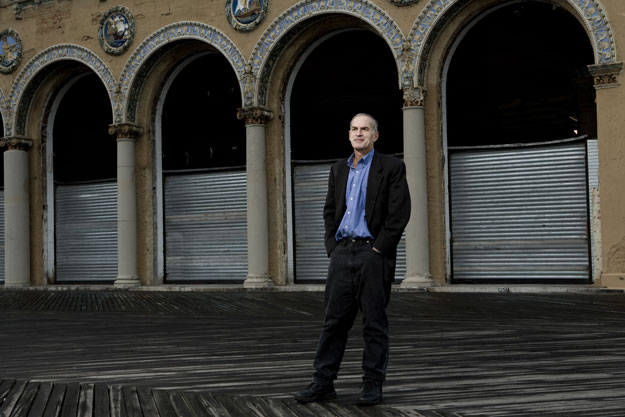 Norman Finkelstein, the independent scholar and author who swore he’d never return to Chicago after being denied tenure from DePaul University, was back in town on Friday, April 16th, as part of his book tour for ‘This Time We Went Too Far’: Truth & Consequences of the Gaza Invasion (OR Books). The title of his sixth book on the subject of the Israel Palestine conflict is a reference to a Ha’aretz article by Israeli journalist Gideon Levy concerning the Israeli invasion of Gaza at the end of 2008.

In his April 16th lecture in Chicago, Finkelstein said, “Nowadays when we hear about those 22 days [of Gaza invasion] we are told there was a war in Gaza, but was there a war in Gaza? There was no war. In reality, not a single battle was fought.” Finkelstein listed off the numbers of casualties, many of them civilians. He continued: “That’s not a war. That’s a massacre.” He cited Amnesty International reports in support of his views of human rights violations in Gaza and chose not to answer when asked by an audience member what his views are of the one-state or two-state solution, deferring conflict and politics to instead focus the issue of Gaza as a human rights violation.

Certainly not everyone in Chicago welcomed Finkelstein, whose Depaul University class “Equality in Social Justice” was dropped within a week of classes starting in fall of 2007, after being denied tenure that spring because he did not uphold Vincentian values, the school claimed. Protests from faculty and students wearing t-shirts that read “We Are All Professor Finkelstein” immediately followed the decision in which they felt Finkelstein was ironically being denied his own equality and social justice because he had spoken out on equality for Palestinians.

A Jew himself who makes it widely known that his own parents were Nazi holocaust survivors, Finkelstein has received enormous criticism from opponents like professor and civil liberties lawyer Alan M. Dershowitz for books such as The Holocaust Industry: reflections on the exploitation of Jewish Suffering (Verso, 2000) and Beyond Chutzpah: On the misuse of anti-Semitism and the abuse of history (University of California Press, 2005). His defenders include philosopher, political activist, and Professor of Linguistics at Massachusetts Institute of Technology, Noam Chomsky. It was Chomsky who warned Finkelstein while he was a graduate student at Princeton and started becoming interested in the history of Zionism that if he pursued the subject, his career would suffer immensely.

Decades and many books later, Finkelstein still faces opposition, this time in merely securing a venue for his Chicago lecture. Just weeks before the scheduled April 16th lecture at St. George Greek Orthodox Church in Lincoln Park, event organizer Shirien Damra received a letter notifying her that the Parish didn’t want to be affiliated with the ideologies of Dr. Norman Finkelstein. The lecture, which was sponsored by Students for Justice in Palestine (SJP) at Depaul, Middle Eastern Student Association (MESA) at Loyola University, and student groups on almost every Chicago campus including Northwestern, UIC, U of C, St. Xavier, Northeastern Illinois University, and IIT, was rescheduled to St. James Cathedral near Chicago’s Gold Coast neighborhood.

Despite the venue change and continued backlash for Finkelstein’s political views, the lecture was well attended, every pew packed with mostly young people who leaked into the aisles and standing-room of the 500-person capacity historic 1950s cathedral to see opening presentations by Jody McIntyre, a young British activist for Palestine, and British hip-hop artist Lowkey, who performed his song “Free Palestine.” The audience consisted of Palestine supporters, ex-students of Finkelstein’s, curious bystanders who wanted to witness what all the controversy was about, and also SAIC students from Roxane Assaf’s “Palestine/Israel: US Media Myths” class.

The recent documentary about Norman Finkelstein, “American Radical: the trials of Norman Finklestein,” (David Ridgen and Nicolas Rossier, 2009) which received the Audience Choice Award at the 2009 Chicago Underground Film Festival and has screened several times at the Gene Siskel Film Center, portrays Finkelstein lectures as aggressive, emotionally draining, shouting fests between Finkelstein and his audience. Those who attended his April 16th lecture to see tears, screaming, or crying, however, surely left disappointed, as the three-hour presentation was as civil and unsuspecting (minus the hip-hop performance) as C-SPAN’s daily coverage of House or Representatives hearings.

Finkelstein, who has been on the road throughout America and Europe almost consistently since 2009, was noticeably exhausted at the April 16th lecture, where he talked calmly and confidently and acknowledged his appreciation of speaking amongst friends, who he was regularly applauded by. One possible reason for the lecture’s lack of visible objection, was that the lecture was curiously held on a Friday night, a time when observant Jews celebrate Shabbat, a day of rest that surely does not include attending, let alone protesting, lectures by those who have been accused of anti-Semitism. Nevertheless, The 57 year-old scholar is likely having to make a large adjustment from his career as a distinguished professor at colleges like Rutgers University, New York University, and DePaul University, to his renegade-like new lifestyle as an exiled full-time author, activist, and lecturer.

In the documentary “American Radical: the trials of Norman Finklestein,” Finkelstein laughs at those who think he is making a living off of his politics via his writing and speaking engagements. Still unable to secure a tenure-track teaching job, it is as if Finkelstein’s career has followed Chomsky’s prophecy in the essay “The Fate of an Honest Intellectual” in his book Understanding Power (The New Press, 2002), in which he writes: “What happened to Finkelstein is the kind of thing that can happen when you’re an honest critic.”

Finkestein, McIntyre, and Lowkey will continue their tour together on college campuses, churches, and art centers throughout New York, Arizona, and California until May. “American Radical: the trials of Norman Finklestein,” can be seen April 24th at 5 pm at the Gene Siskel Film Center as part of the Chicago Palestine Film Festival (April 16-April 29).