The puppet by very nature is a tough customer, a perpetrator, an instigator and a mocker. A liminal non-human status makes it a natural affront to the established order. Perhaps this is why puppetry… 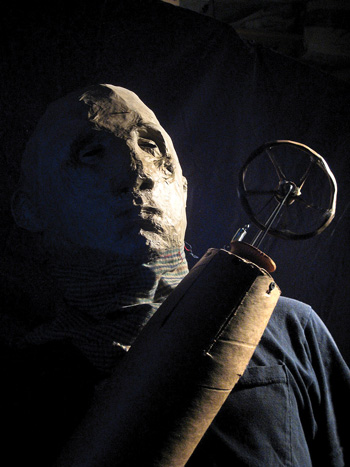 The puppet by very nature is a tough customer, a perpetrator, an instigator and a mocker. A liminal non-human status makes it a natural affront to the established order. Perhaps this is why puppetry has so often found itself relegated to the outer strata of the theatrical universe.

Yet, as evidenced by the growing popularity and renown of such groups as Red Moon Theater, puppetry may be on the ascent. In step with such a renaissance, Evanston’s fledgling Theatre Zarko challenges any assumptions regarding the marginality of puppetry.

“I dreamed that my sister found a toy in the grass and brought it to me. I played with it for a while until a cloud blackened out the sun. My hands turned into birds and flew into a tree…”

So begins Theatre Zarko’s premiere production, “The Sublime Beauty of Hands,” which confronts the devastation caused by land mines while also exploring the dualistic nature of the human creativity from which such horrors originate.

Puppeteer Michael Montenegro cites as his impetus for making “Sublime,” an eight year “milieu of constant war.” Denied any visual documentation of the terrors in Iraq and Afghanistan, and aware that our soldiers were coming back deeply traumatized, Montenegro found himself preoccupied by dream images. In response he created a symbolist performance that could address both the human cost of war as well as the profound visual deprivation of a nation kept in the dark regarding its actions.

“I am always struck by the voiceless nature of the real victims of any war,” says Montenegro, “and that perhaps their only voice becomes the nightmares of the perpetrators.” In “Sublime” it is this dark world of bad dreams that shrouds both victim and assailant.

As the performance initiates, masked female actors speak lines of poetry their identities obscured as if in a painting by Magritte, their sinuous hands moving like magnificent, vulnerable birds.

“Hands are at the center of creativity…” said Montenegro, “exquisitely beautiful in their ability to express everything that takes part within the heart.” The human hand in this production is emblematic of both creativity and cruelty, as well as the complexity that results when these two uniquely human attributes combine. 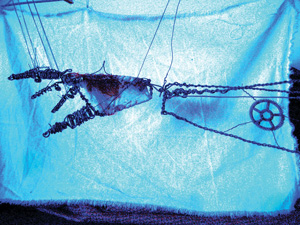 Hence in “Sublime Beauty” a toy-maker designs explosives and employing Montenegro’s stark and resonant choreography -the inevitable horror is realized in the loss of a child’s hands.

In a post-performance discussion, troupe-members Jason Tucker and Laura Montenegro decried the heinous practice of making land mines that “are bright yellow and look attractive like toys.”

Sites such as Unicef’s “Impact of Armed Conflict on Children” substantiate the performers’ claims and reveal startling figures. Since May 1995 children have made up about half the victims of the 50,000 – 100,000 anti-personal mines laid in Rwanda. Naturally curious, children are likely to pick up strange objects, such as the infamous toy-like ‘butterfly’ mines that Soviet forces spread by the millions in Afghanistan.

Michael Montenegro says he’s “intrigued by the neutrality of creativity. A creative person must choose how to use her/his gifts… DaVinci made this extraordinary painting, the Mona Lisa, and at the same time designed weapons… using his tremendous gifts towards opposite ends.”

In the final and possibly most haunting movement of “The Sublime Beauty of Hands,” Montenegro speaks to the effort to replace shattered limbs with prosthetics.

“I quietly mock the hubris of human beings attempting to replace a hand with a mechanical device.” Although he says that he accepts that this is well-intentioned, he grieves “the lack of struggle to prevent the loss of those things that are irreplaceable.”

Although Theatre Zarko’s comedic second act, “Klown Kantos,” comprised of a series of stand alone puppetry performances, is whimsical and engaging, it is not without social commentary.

Despite the fact that “Meat,” an entirely puppet-acted piece, is set in a butcher shop and is comical, it could easily be understood as promotional of vegetarianism.

In another piece in the second act entitled “Calvin” Montenegro displays remarkable ability as he performs with a headless twin puppet that is attached to his body. According to the puppeteer, this piece illustrates the “trials and tribulations of dealing with other people.”

Michael Montenegro’s genius is not simply in his ability to organize his troupe or conceive an impressive production or craft and perform his puppets. His genius is squarely centered in his employment of the inherent symbolism of puppetry in order to examine difficult issues. When Montenegro is asked to call to mind a historic example of puppetry’s social relevance, he says, “in the old circus, a clown would race terrified around the ring with a wire attached to his back. At the end of the wire was attached a skeleton. So what he was afraid of, what he was running away from was attached to him. This is on the surface a simple visual joke. But of course it is a very good nonverbal commentary on our lives.”

The Sublime Beauty of Hands, performance, Michael Montenegro.
Images courtesy of the artist.
Like 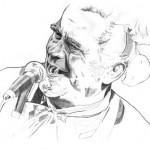 3 Responses to Puppetry with a Social Conscience