The Big World: Recent Art From China provides a glimpse into a thriving, politically provocative art scene that few Western art lovers have had a chance to experience.

The Big World: Recent Art From China, showing at the Chicago Cultural Center through August 30, provides a glimpse into a thriving, politically provocative art scene that few Western art lovers have had a chance to experience. Timed perfectly to coincide with A Conversation With Chicago: Contemporary China in Sculpture on display in Millennium Park, The Big World strives to represent young and unknown artists internationally. The selected works represent three major themes: the city and the realities of urban life, the human condition, and critical challenges to the “social collective” of Chinese society.

The exhibition is nicely balanced in representing more traditional art forms with new media work. The ghostly, cartoon-like figures of Xiong Yu’s oil paintings nicely compliment Bu Hua’s animated short, Savage Growth, which depicts the coming of age story of a young girl who witnesses the devastation of unchecked development on the surreal wonderland in which she lives. Jin Shi’s Retail Business — Karaoke No. 2 installation integrates video footage of a strip club into a portable cart such as might be used by a street vendor, surrounded by inviting lights and an area for viewers to sit and participate in the piece.

Some of the work speaks to alienation, isolation and the dehumanization inherent in a repressive society. Liu Bolin’s series of photos depicts a man painted to literally blend in with his industrial surroundings, fading into bricks and pipes, even into the body of a law enforcement officer who appears to be arresting him. However not all of the work is heavy-handed or bleak; Wang Quinsong’s The Glory of Hope, displayed on the opposite wall, depicts a family gathered to watch a brilliant sunrise, the Olympic rings imprinted in the muddy landscape behind them.

Many of the artists simply examine what it means to be a part of modern Chinese society. Zhao Liang’s film City Space depicts a series of mundane, day-to-day scenes recorded on the street, revealing interactions between people which are sometimes disturbing, sometimes humorous, and always sincere.  The mandala Totem paintings by Yin Zhaoyang seem to reflect upon ancient Chinese notions of spirituality and their applicability to contemporary times. Even the more abstract Engine by Yin Xuizhen, a large sculptural piece constructed of used clothing and stainless steel in a shape reminiscent of a heart, speaks to the interconnectedness of individuals within a society.

All of the work in The Big World has clearly been carefully chosen to represent the diversity and depth of the contemporary Chinese art scene; every artist featured could easily be the focus of their own individual show. The Big World is not to be missed. 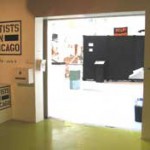 Why your smartphone won't work at SAIC