From May 10 to July 5, 2009, the Hyde Park Art Center is highlighting the work coming out of exhibition spaces run by artists.

Chicago, a city teeming with space, artists and grounded in a midwestern Do-It-Yourself attitude, is a natural home for alternative exhibition spaces. From May 10 to July 5, 2009, the Hyde Park Art Center is highlighting the work coming out of exhibition spaces run by artists. The spaces featured in Hyde Park Art Center’s Artists Run Chicago range from apartments, lofts, garages and warehouses, to contemporary galleries – all of whom challenge the idea of what an exhibition venue should be. The program includes over thirty-five exhibitors including artLedge, Fraction Workspace, LiveBox, Margin Gallery, the Green Lantern Gallery and many more. The event also features tours of the artist-run spaces, presentations, panel discussions, and performances.

One of the participants in Artists Run Chicago is the Green Lantern Gallery, a space featuring a variety of exhibits that will be highlighted as part of the event. According to the director of the Green Lantern Gallery, SAIC alumna Caroline Picard, one of their features will be a book that they are publishing called The North Georgia Gazette. Also included are two drawings by SAIC alumna Deb Sokolow. “The book,” Picard explains “features an original manuscript that was originally printed in 1821 by sailors stuck in the arctic for eight months. Their captain insisted that they keep a newspaper (of only happy news) and put on plays for one another, in order to ward off scurvy.” Other featured artists in the book are Daniel Anhorn, Jason Dunda, Rebecca Grady and Nick Butcher. Picard said that since the Green Lantern Gallery is invested in a multimedia approach, they felt that putting together this particular project was consistent with their mission.

Picard says that the general public reaction to their work in Artists Run Chicago has been positive. “People seem pretty excited,” she said. “I just think it’s awesome that HPAC took it upon itself to try and corral all of these alternative practices in one space,” explains Picard. “It’s a huge amount of work and I feel like the energy that comes across from all of the participants is thrilling. It was an honor to participate.” 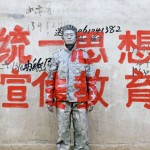 One Response to Artists Run Chicago